The Week That Wasn't

Spent the week getting ready to go to Nashville to spend some time with Keith’s mom, aunt, and a bunch of cousins I’ve never met. Had too much to do to post much or use complete sentences: flowers to plant, clothes to wash, TV shows to watch (to clear off the DVR), bills to pay, house to tidy, etc. etc....

...Then yesterday, the trip got cancelled, which is a little bit of a bummer, since I love Keith's mother and was looking forward to seeing her again.

Since all the craziness of the week left little time for posting, here’s some quick stuff to fill the gap:

Dorian proves once again why he’s one of my blogging heroes.

The Comics Reporter has a preview/review of a book I really, really want.

Bully tells us how to do BEA the right way. What a well-mannered little stuffed bull he is!

The Pulse has an interview with Ivan Velez about the long-awaited conclusion and collection of Tales of the Closet. The interview includes a lot of information I didn’t know about rights disputes and other issues that held the series up for over a decade. The collection will probably be roundly ignored by most gay comic readers, but I am looking forward to it.

Speaking of books that will be ignored by most gay comic readers, Alison Bechdel has a graphic memoir out, which I am also greatly looking forward to getting.

The Indigo Girls are working on a new album and they’ve been posting little videos of the production sessions on their web page.

Upcoming concerts we hope to catch:

Future plans for posts that I hope to write/finish in the very near future:

Some reminiscing about my dad and comic books
Some actual honest to god comic reviews!
A long rambly post about spirituality
A critique of the current sad state of Days of Our Lives
My addiction to serial drama
My ambivalence about the Democratic Party at this moment
The restoration of the Louisville Derby Clock
Some thoughts about comic books in general
My last mixed bag reviews
Eddie's Top Gay Comics Moments!
New music I want
My ten favorite Emmylou Harris songs
100 things I love about Louisville
Ranting about the "Marriage Protection" Amendment
Dorian kind of sort of asked me to do this pretty cool meme-thing, which I actually do want to do. I just couldn’t get to it this week.

And finally, some little gifts for Roger who's feeling kind of grumpy.

Maybe these will cheer him up.

The Goddess of Music singing a classic!

Adam West having some sort of seizure

A picture of the sweetest kitty in the world 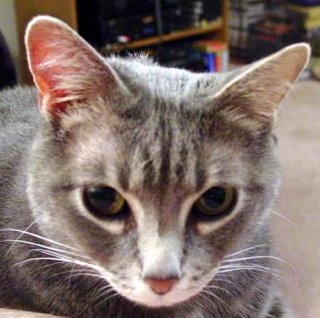 You can let them cheer you up too, if you need it.

Have a nice holiday weekend!