Can one get more retro than Andy Griffith? 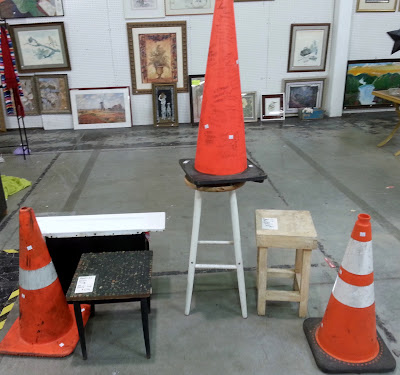 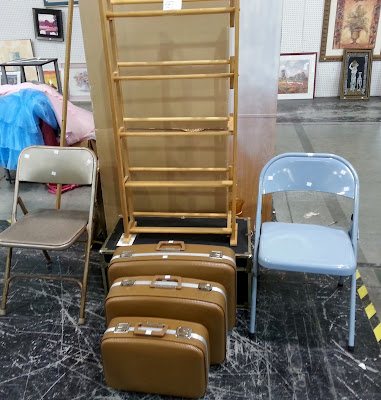 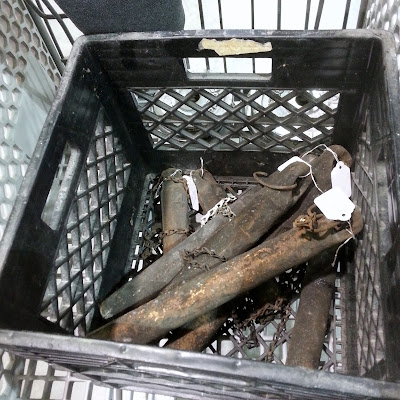 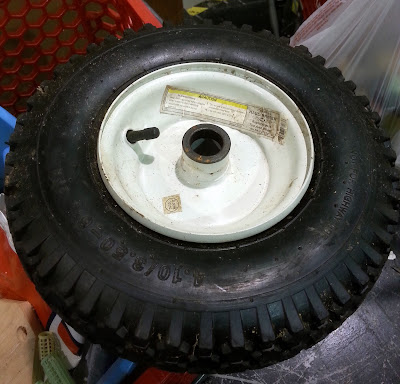 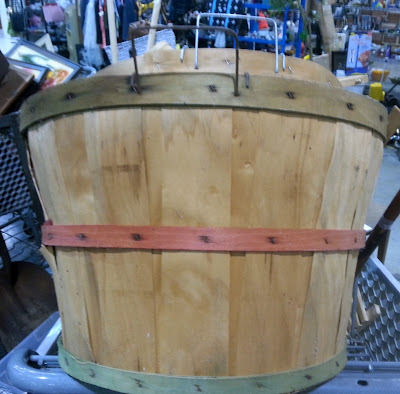 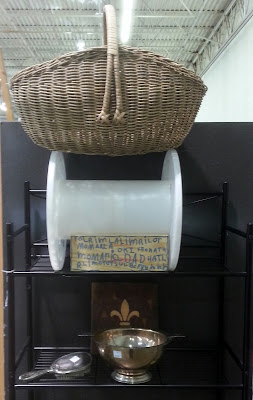 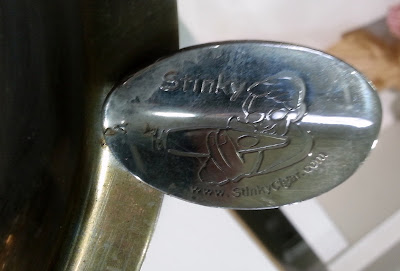 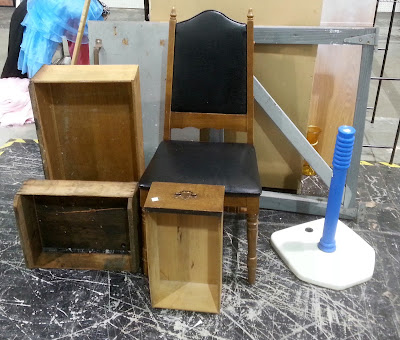 I'm still working on the other spaces.  I decided to stay in and rest yesterday, since it was raining,  I've been trying not to have too much downtime post-treatment, but I really do better when I have a day or so off.  I'm heading back over today, so maybe I'll have more pics after that.

Typical comments about the horrible lighting at the place apply.

This is my main vintage/primitive/decor booth, which is one of my most popular.  This is the right half of the booth.  I've been working on thinning it out, re-zoning the merch, adding more small furniture, and cleaning things up.  Since I took this pic, the chair and wicker hamper have sold, along with the green chairs in the back. 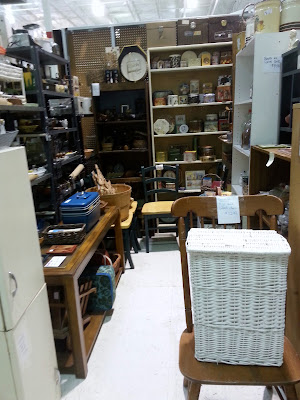 This is the end of that booth.  The first shelf here is all Louisville Stoneware and Bybee Pottery. 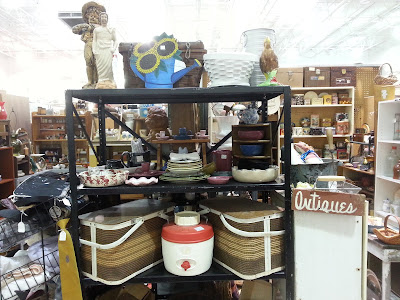 This is the left side of that booth.  That white shelf in the foreground is what started the whole process.  I sold the shelf that was sitting there and did not have one to replace it.  A vendor friend was looking to unload that white ine cheap, so I took it, only to find out that it was six inches too long to fit in the spot where I needed it.  This prompted a game of Booth Tetris to get the shelves in the right places, which meant I had to take some things of of them.  At the point I was thought: "In for a penny.  In for a pound."  And the booth re-do began! 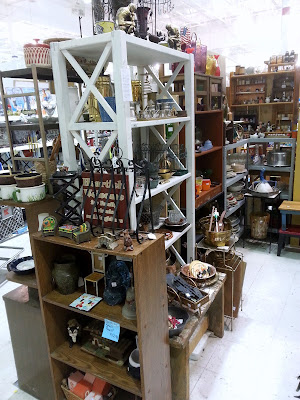 This is my salvage booth, which now needs more work done on it, because I added a bunch to it with the Junk Set Out haul. 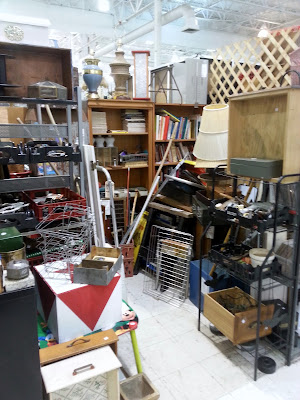 Finally, there's a rent special on right now.  Rent a new booth for two months and get the third one free.  I decided to do it, because we were anticipating getting some large items from my mother-in-law.  That has fallen through, but I've ended up making several trips a week now to the Mount of Sorrows to haul stuff off of it, so it's working out well.  In this pic, the rolling cart in the foreground left has sold, along with the chair beside the painting of the lady. 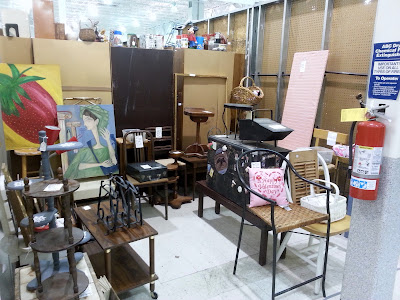 If that last space looks kind of familiar, that's because I rented it a while back, but gave it up because I could not deal with the fire extinguisher pole.  I took it again, because it was the only space in my aisle that was available.  I'm not willing to walk any further than I have to when I am stocking and cleaning.  This space will go away once the rent special ends.  As long as it helps me clear a bunch of stuff out, it will have served its purpose.

I have a goal set to move into a smaller storage space by June of this year.  At this point, I only have three large items left standing in the way of that move.  Thanks to this new space (and the booth re-do), things have been moving along pretty quickly.

QUESTIONS WHICH DEMAND AN ANSWER 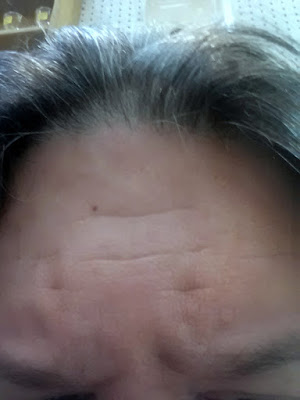 Has my forehead always been this wrinkly?  Also, is my hair thinning?

This is going to be an unusual week for us here.  I have treatment tomorrow.  If I feel up to it, I'm going to go see Black Panther afterwards.  If not, I'll be seeing it later in the week, for sure.

Keith is heading to Arkansas after dropping me off at the cancer center.  It's moving day for his mother, and he's going to help out.  It's been a long, stressful journey for everyone concerned--one that demands its own post.  Tucker and I will be holding down the fort here.  Woo hoo!  Cartoons all the time!

After today, I should have the big booth redo I've been working on for several weeks now completed.  I've just got a few more things to do, including taking pics, and I'll be able to do the big reveal here.  This has been a real challenge this time around.

Just as soon as I would get one part done, a really large prominent item would sell, meaning I'd have to start on that part all over again.  Then junk set out hit last week while I was still working on the booth, adding in more big, new stuff to deal with.  On top of all this, Keith has been inspired by his mother's ordeal to start downsizing, which means more things for me to deal with. (So. Many. Books.)  On the other hand, getting that crap out of the house has been nice.  We even got a new bed to celebrate.

Speaking of junk set out, it was kind of short this time around.  It rained off and on. It was cold.  Not much stuff got put out.  Regular spots didn't participate. Then, the trucks came through extremely early in the week and it was all over.  Despite all of this, I did get two mice Mazda loads of stuff.  I just finished getting pictures of it all, so I'll be sharing those too.

Not much else to talk about right now, so let's cut right to a very special Music for Monday.  Seriously, even if you normally skip these videos, check this one out.  It's awesome!

Sorry, everyone, but I won't be rambling this week due to EXTREME busy-ness.  Due to partly to circumstances I could not control and partly to my own poor planning skills, I am smack dab in the middle of Junk Set Out AND a massive booth re-do.  I barely even know what my name is right now.

I'll get some first looks at the booth re-do and the first finds of the set out later this week.

In the meantime, enjoy this little bit of booth staging humor: 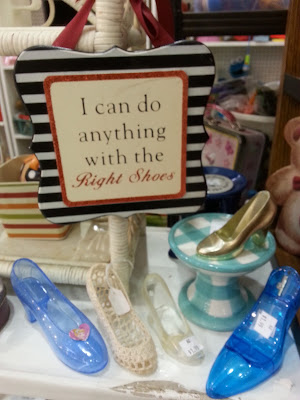 Also, here's the latest odd couple to cross my path: 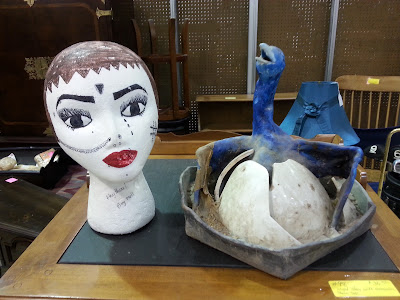 When I bought the bird hatching figurine, the cashier told me that I would never sell something that ugly.  In one of those wonderful twists of fate and junking, she was the cashier who rang it out a week later to a customer who was totally tickled to find it!

I guess I can also give you all some music for Monday:

It's three in the morning already and Mammaw has to get up in a few hours to get ready for the Beauty Pageant!

She needs her beauty reat!

While Mammaw defends her crown, I'll be busy at the Goodwill half-off sale and the 2nd anniversary sale at the vendor mall across the street from the Peddlers Mall.
Posted by EM at 2/03/2018 05:00:00 AM 1 comment: