Trying to get completely back on track here.  Or, at least, as back on track as I am capable of getting.  I've pretty much realized that getting back on track is a lifelong endeavor for me, so I might as well get used to it.  And that's today's philosophical, nature of life musing.  Tune in next week when we ponder the innate state of being of fava beans.

Okay, so Keith and I are driving along one of the most beautiful tree-lined streets in town yesterday, when--all of a suddden--this huge tree branch falls right in front of us on the street.  We had absolutely no time at all to avoid it, so we barrelled right over it.  Thankfully, it was large, but not thick and it pretty much shattered.  The car was only scratched--no other damage.  But it freaked us the hell out, for sure.

This is a snippet of our dialogue immediately after the incident:

It was a good five or ten minutes before either of us could do more than just exclaim profanity.  Then we decided that we were so traumatized that the only recourse we had was to get strawberry shakes at McDonalds. If we had hit a deer, we probably would have had to go to Waffle House.

By the way, McD's shakes have gotten a lot better since they started the McCafe thing.  Which is kind of ironic, because most of their specialty coffees suck.  But the strawberry shakes actually have little bits of strawberry in them now.

Well, tax season has finally hit the resale market in Louisville, and not a moment too soon!  My January sales were lagging everywhere!  A really nice weekend helped too.  I've been hauling tons of stuff into the Peddlers Mall to get ready for the sales to come, and they finally hit on Saturday!  I had my highest sales in months--almost 100 dollars!  Yay!

(Of course, this means I'm going to have to haul more tons of stuff out there to replace the stuff that sold.  It's a never-ending cycle!)

Whenever I have a really strong day like that, I like to look at what's sold and see if there are any themes or trends.  Saturday had several:

As for YesterNook, I had my best day there ever on Saturday. Went there Sunday with the intent to do a major rearrange, which kind of hinged on one particular shelf--which sold about five minutes before I got there!  So the rearrange turned into a kind of a punt.  I reshuffled some stuff but didn't make any major changes.  Did get some restocking done, though.  I've got to bring a little more stuff over at some point this week.

Sunday was good at both venues, too--not as good as Saturday, but good.  I knew YesterNook would be lower because I was working the space.  There's not really enough room for folks to check things out when I'm working, so they pass it by.

Overall, I'm ending the month pretty well at both spots.  This has turned into my highest YesterNook month ever.  The Peddlers Mall is still off a bit, but has bounced back nicely.  One crappy week is keeping my total about 100 bucks off.  But, we are definitely hip deep in the resale busy season.

There weren't any yard sales at all over the weekend, despite the nice weather, so we hit the thrifts.  I was mainly looking for large items, since I had a spot at YesterNook to fill.  I found what I was looking for: 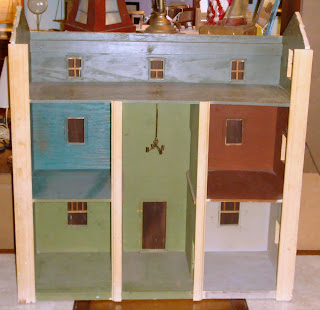 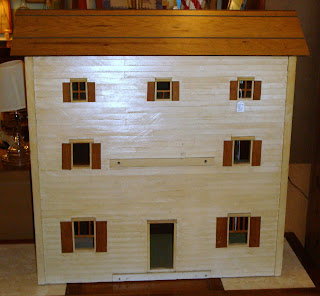 It's gorgeous, solid, and hand-made.  The windows are missing a lot of the frames, but otherwise, it's in great shape.  Someone is going to love this baby.

It's supposed to be a beautiful week here, so I'm looking forward to riding my bike to class ever day.  My schedule gives me most of the afternoon free this time around, so I usually grab a cup of coffee somewhere and read a bit before heading home. It's kind of relaxing and then I get home in time to work on booth stuff.  I'm trying to get the backstock that has taken over one room of the house together and organized.  Wish me luck!

glad you're OK. seems like a perfectly good excuse to curse, BTW. I probably would have, too.