About a Trip (Part One)


Finally finished with the San Francisco pics.  Take that off the list!  Yay!  Keith is still working on his, so there will be a part two when he is done.  Those will be the good pics.


Mine are the odd ones.  I've never been good at typical travelogues.  I'm too weird for that.

This was about the tenth or twelfth trip to SF for us.  It used to be our regular vacation spot.  We'd go there just about every Christmas for a couple of weeks up until we bought the house, when we started saying home for the holidays.  Because we've been there so much, we've already long since done the typical tourist stuff, which means there's not a lot of that kind of thing here.  We go there primarily to hang out, do a little shopping, and eat good food.  You will find a lot of that kind of thing here.

Let's start with the hotel  This was our room.  Right next to the street.  The wifi sucked and the free breakfast was a bit skimpy (but it worked), but the location was good and the rates were right.  We'd stay there again, so all in all, it wasn't bad.

San Francisco is a city of many wonderful murals.  I think I could have taken hundreds of pics of them.  Here are a few of my favorites. 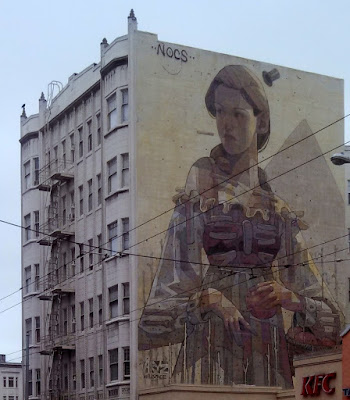 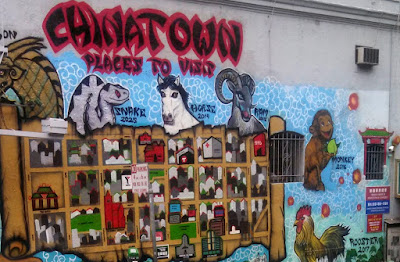 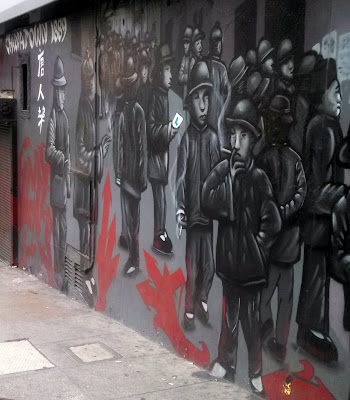 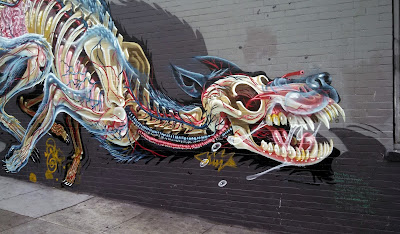 Chinatown is one of the places we like to go to because the shopping is fun and the food is great.  We had some wonderful hand-rolled egg rolls there.  Yummy!  I also got to meet Confucius.  He was friendly and even told my fortune.  (Which I cannot find at the moment.) 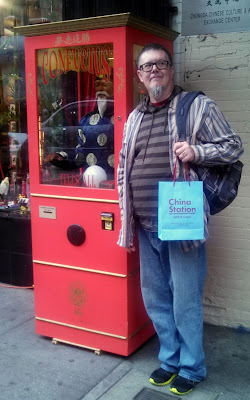 I also go just a bit nuts over all the fun details on the buildings.

Back when we would go every year, we would stay at this place.  It was several blocks up the street from our current hotel, but we had to go see it.  We loved The Leland!  About ten or so years ago, there was a terrible fire there, and it was closed for several years for reconstruction.  Now it's senior living apartments. 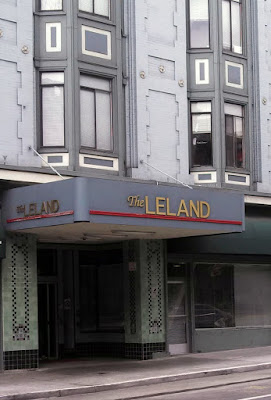 I didn't get many pics in stores, because so many of them explicitly ban photography and selfies and such.  I did sneak this one in a thrift because it was so cute. I think the one on the right thinks the guy on the other end took his saucer.

Sadly, some of the places we used to love are gone, including several stores.  A couple of our long time favorites were still there, however.

Did you know that Hello Kitty has a bus?  Really! 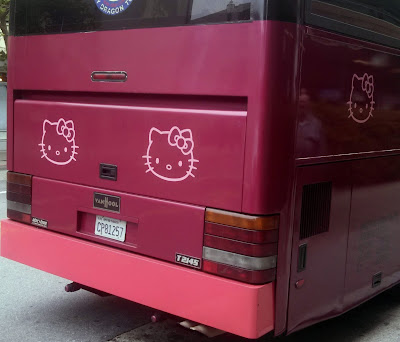 I met a couple of odd women while we were out and about. 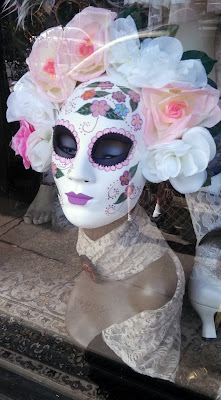 Some pretty strange dudes, too.

We were lucky enough to find two excellent restaurants right across the street from our hotel.  We ate at both of them several times. 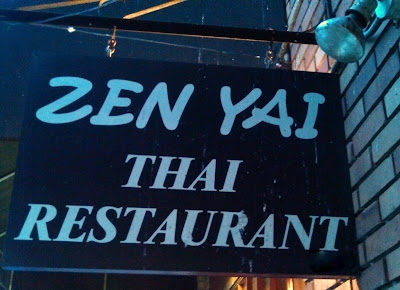 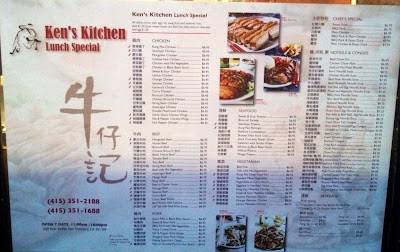 I kept intending to take pics of the food, but then forgetting about it until we were finished.  Put a plate of food in front of a fat dude, and all he will think about is eating it.

Signs in a store window in Haight-Ashbury. 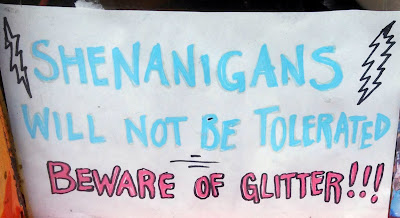 One of the odd things that I do when traveling is visiting Catholic churches and taking pictures of the statues and stuff.  It's kind of an extension of my religion collection.

These are from Our Lady of Victory.

Can you tell it was originally a French-language church?  I've never seen an image of Joan of Arc in person before.

These are from the Basilica of Mission Dolores, the mission around which the city was founded. 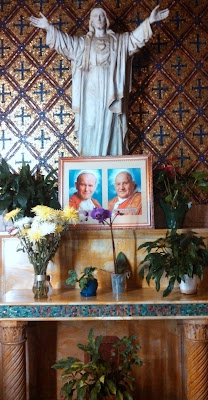 I have to be honest and admit that I took a pic of this information post about building the Golden Gate Bridge because it had the term "pile butt" in it.


One of the more "touristy" things we did was visiting the sea lions at Pier 39 on Fisherman's Wharf.  Sea lions are cool. 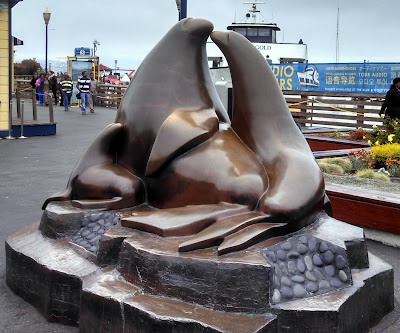 The little dude in the foreground of this first pic was being quite the diva.  He just sat there, all by himself, posing. 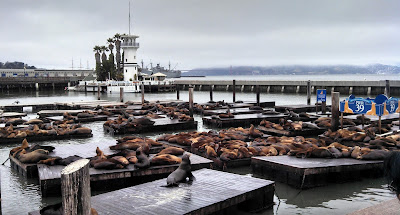 They are so funny to watch.  They just pile up on each other and crash out.  Every so often, one pile will start wiggling and carrying on when the guy on the bottom gets tired of being on the bottom and makes his way noisily out.  "ORT!  ORT!  ORT!"  (That's sea lion for "Get your fat ass off my nose!")

We joked about bringing one home for Chiquito, but we were afraid it would sleep on him and smash him.  Chiquito would so not be well for that.

While I was watching this one particular pile, something, uhm, interesting happened. 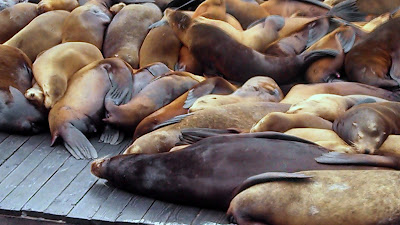 The one on the left with the flipper sticking out?  See him?  Well, he rolled over...and popped this huge erection!  I am not kidding.  Everyone on the dock saw it and cracked up.  By the time I got the phone up for a pic, it had subsided somewhat, but it's still a little bulgy.

We also managed to enjoy some special treats.  We went to the Ghiradelli chocolate shops in Ghiradelli Square for an ice cream creation.  Once again, the spoon was faster than the camera.


And it's not a trip to San Francisco without an It's It!  They are sooooooo good! 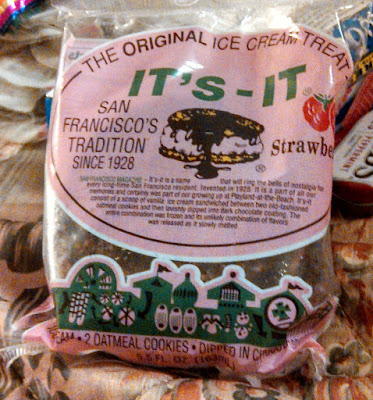 Well, that's the trip through my eyes.  I'll have Keith's view as soon as it's ready.  I'm pretty sure it doesn't have any walrus woody in it.  That kind of stuff only happens to me.  I also still have to talk about the thrifts.

That was such a fun trip, every bit as awesome as it used to be, except for one thing.

It's an awfully hard place to get change for a buck. 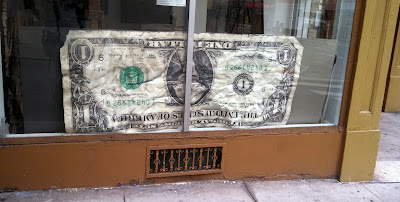 Wow! It's like whirlwind tour of the city. Thanks for sharing all these photos. I love the murals and the Joan of Arc statue. We were in SF back in 1982. It was freezing cold and we weren't prepared for that so we had to buy hoodies. Then we drove down the coast to LA and it was murderously hot down there.

Glitter! Popes! Sea lions! What more could one want?

I really enjoyed your view of SF!! The Sea Lion woody just cracked me up. I haven't been to SF in many years but you make me want to visit again. I too love the buildings, most old cities have amazing architecture.
hugs,
Linda