Time to start sharing stuff and telling stories, I guess.  I'm getting behind and still need to get some pics of some stuff.

The first rule of Junk Set Out is that you don't talk about Junk Set Out.   Oh, wait.  Wrong movie.

The real first rule of Junk Set Out is that it's not really, officially Junk Set Out until you see the first toilet!

Now that we have that out of the way, let's begin. 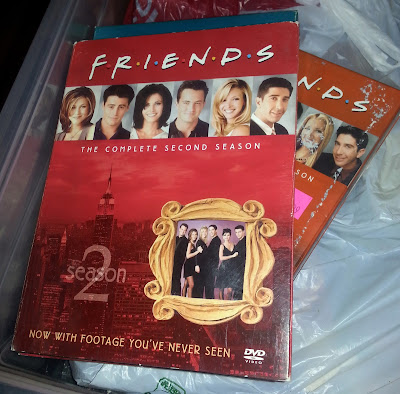 I found three complete season sets of Friends and one that was missing two discs.  Seriously.  I also got a bunch of kids books and Disney DVD's and VHS tapes at that house.  I'll be keeping a few of the Disney DVD's.  Classic animation never goes out of style. 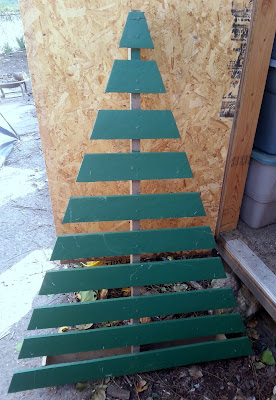 Christmas tree cut from a pallet. Safely stored until next year. 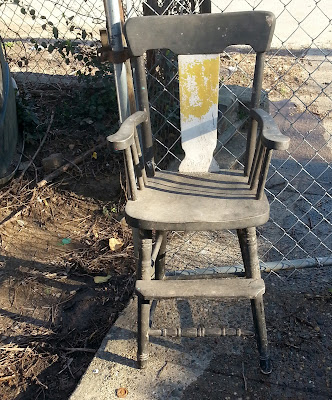 Painted primitive chair from the freebies at the store closing.  There was a group of folks standing around waiting for new stuff to come out, which was happening all the time.  I spent the whole afternoon there, between the parking lot and the inside room/.  I also bought a few things, because 75% off is close to free.

Anyway, I came out of the store with an armload, and this chair had been added to the parking lot pile.  I grabbed it and some dude tried to tell me it was wobbly and didn't sit right.  I told him that it was steady enough to sit on a porch and hold a large fern this summer.  Keith told me the guy looked at me like I was crazy.

Since I'm sharing freebies, another vendor gave me a box of vintage dishes recently.  I'm selling the box as a set, except for these four cups.  You can't really tell from this pic, but these are actually the size of more modern mugs, as opposed to typical coffee/tea cups you find in vintage sets of dishes.  I've priced them separately, because I like the look of them and I think someone will like the size.  Now, that's a morning cup of coffee!

can't wait to see ALL the junk!

Love the Christmas tree! So much good stuff. No touch the porn...ewwwww! The high chair is great, you see it's potential perfectly! I know you are having a busy week. Hugs!

Good stuff Eddie - can't beat free and 75% off and all in one place too, sort of like 'better' than an estate sale.
Hugs.
Joy