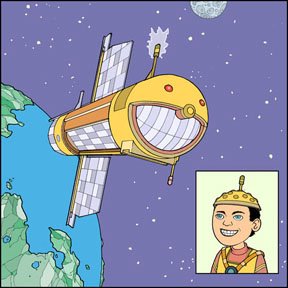 Some corners of the comics world are reeling from the news of Seth Fisher's death. I met him once, kind of by accident. For a couple of San Diego con's. I helped out at the NBM booth to pick up some extra spending money. Fisher approached the booth one afternoon to talk with their sales rep about some work. I think he was wanting to see how they decided what books to publish or something. He had a copy of Willworld with hi, which impressed their sales guy. I don't remember a lot of the details of the conversation, because it was business that really didn't concern me. I was just a bystander. Or, maybe, I don't remember much else because I was staring at his chest the whole time. His shirt was unbuttoned about halfway down, providing a great veiw of his chest hair, which had been shaved into the shape of a star! That part, I do remember, quite clearly. (On his site, there's a photo of him with heart-shaped chest hair, so apparently, he was also a chest hair artist as well.)

Factcheck.org has the real story behind the State of the Union address.

Locally, the Courier-Journal had one of the best political cartoons in response to the SOTU.

You just have to know that the name-calling isn't over yet. The Republican idea of bipartisanship seems to be "let's all get together and agree to do what we say." It's only a matter of time before someone gets called an 'obstructionist.'

One of the CJ columnists also had a really touching euology for Coretta Scott King.

(The CJ links will expire at some point, not sure when, as they move their older stuff to their paid search part of their site.)

Nice, if a little breezy, article about a performer I wish would come to Louisville: Candye Kane.