Looks like the new Emmylou Harris boxset won’t be available until next Spring. Bummer!

Meanwhile, Dorian’s at war with Christmas. And he’s keeping track of where everyone stands!

Yes, he’s making a list. And given how thorough Dorian can be, he’s probably checking it carefully. I wouldn’t be surprised if he even checks it twice… 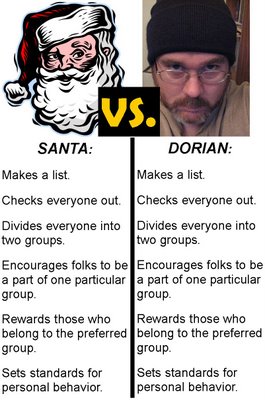 They both seem to have this “beard and silly hat” thing going on, too… So is this a case of “Know thine enemy” or is it more like “We have met the enemy and he is us”? More importantly, which list is this stunt going to put me on?

CBR’s Pipeline offers a plan to revive Wizard. And some folks want to see it happen.

Hey! Lefty moved me up a slot on the “musical guru” list. Wow! I was convinced I’d been a pretty crappy guru, so I was pleasantly surprised. (But he didn’t ask me any questions…)

Speaking of music, Thor’s been sharing the contents of his jukebox with Beaucoup Kevin.

Dammit! Botofest 2007 has been cancelled. What is it about cool music festivals in this town? Bluesky Jamfest lasted one year as a multi-act festival. Now Boto has done the same thing. Damn! Damn! Damn!

Maybe it’s good music in general in this town. Homefront has lost their performance venue. This just SUCKS!

As if it couldn't get any worse, it also looks like we could be on the verge of losing the Rud, too. When it rains, it pours... (That's a Courier-Journal link, so it's only going to be available for free for seven days.)