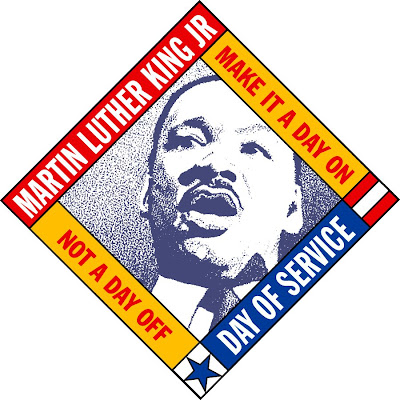 Today is the only national holiday that is also officially recognized as a day for national and community service. I'm getting ready to head off to a clothes closet for kids who need assistance just being ready for school. I've worked in some form of social services all my life, but this is the first time I've ever consciously taken part in an MLK Day service project.

Part of it is my new job. Community service is what we do. Members of my team are all over this town today, helping out. Several of them designed the projects they are working on. I'm really proud of all of them. In the short time I've been with this position, I've learned so much and grown at least a little.

I was raised with an understanding of my responsibility to the world around me and to the other people who live there. When I was still a part of organized religion, one of the conflicts I frequently had was with the idea that all we had to do was offer Jesus to others and everything else would be okay. I knew too many people who were content to save souls, but leave the bodies to starve.

In my time, I've organized marches and rallies, sat on boards, raised money and awareness, worked in shelters, planted trees, given out food, written letters to the editor, and a whole bunch of stuff I can't even remember. But, somehow, for the last ten years or so, I've been content to go to work, rationalizing that, since I was doing social service work, I was giving something every day and nothing more was really required of me. Maybe it was burn out. Maybe it was middle age malaise. Maybe it was whatever happens when you settle down with a partner and have a mortgage. Maybe it was just hibernating.

Coming out of it now, is, as I said, at least partly due to the job, but it's also the timing. We have a president who values community service enough to make today a part of the inaugural activities--a president who believes that we are strongest when we help each other and our communities. It's taken a while to get here, but I'm starting to get in touch with that spirit within me again. Maybe I'm starting to see, that for all the good work all our social service agencies do day in and day out, that something more is needed to make real change--something that taps into the spirit of who we are and what we can be.

Or maybe I'm sounding too much like an advertising slogan or a sermon. I was afraid I was going to end up going that route and get carried away. Regardless of the rhetoric or the flourishes, this is a day to help. A day to give. A day to serve. If you don't have anything lined up for today, go to the MLK Day web site and see what's happening in your local area. It's not too late.

And to close, let the Indigo Girls say it better than me: