I don't care if it rains or freezes...

Stopped by my favorite thrift store a couple of weeks ago with a particular purchase in mind. 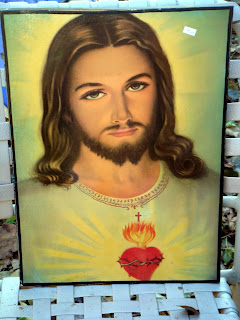 I'd been watching it for ages, waiting for it to cross the half-price threshold. It had been in the half-price zone for almost a week, but the day the new half-price tag colors started at that store, I bought a bunch of other stuff and knew I wouldn't have been able to manage the picture, plus three bags of stuff on my bike. The three bags I could handle with no problem, but I thought it would be best to leave the pic. 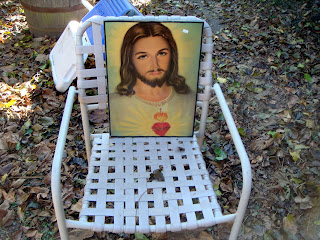 So, as soon as I got the chance, I rushed back to the store and was overjoyed to find it was still there. It's a perfect fit for me. First, it's religiously-themed, which is one of the self-appointed niches for my booth. Secondly, it's done in a style that appeals to a lot of Hispanic Catholics, and there are large numbers of Latino families that shop in our location. To paraphrase the Pawn Stars dude: I want this thing for my booth.

I did buy a few other small things along with it, but only a few, so they didn't really pose a transport problem this time around. I decided that I would stop tempting fate, buy the thing before someone else did, and then figure out how to get it home on my bike. The problem came when the store didn't have any kind of bag that the pic would fit in. 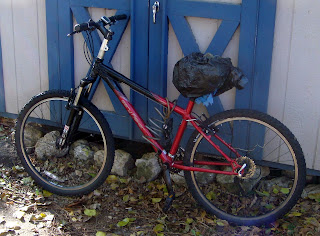 First try: Hold under one arm, steer with one hand. Not real good at one-handed steering. FAIL

Second try: Hold with one hand while clutching the handle bar. Not nearly enough of a grip on the pic to hold it. FAIL

In exasperation, I stop the bike and lay the pic across the handle bars to take a break and ponder this some more. Then, I realize that it lays nicely across my handle bars! With a little repositioning, I can lay it to where it doesn't interfere with my knees, steering, or braking, yet is held down by my palms. SUCCESS! 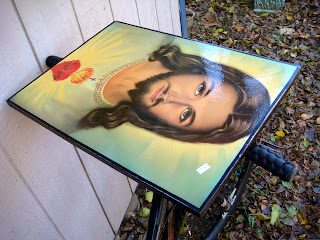 I was afraid the image might get scratched, so I laid it face up. After about a half a block, I realized I was getting some odd looks from passing cars. Obviously, these people have never traveled with Jesus before. It takes a commitment! No mere bumper sticker for me!

Email ThisBlogThis!Share to TwitterShare to FacebookShare to Pinterest
Labels: life as we live it, the booth, thrifting

Roger Owen Green said...
This comment has been removed by the author.
7:03 AM