And junking, of course.

Headed to Unique on Monday for the half off sale.  I was expecting a day of long lines, overly ambitious prices--even at 50% off, the eternal struggle for the ever elusive shopping cart, buying lots of bagged sets, and--just maybe--one super fabulous score.  I was pretty much wrong on all counts, or at least misguided.

At the Portland store, I managed to make due without a cart. I found a large, cheap bag on one of the racks and used it instead.  I did find one item that wouldn't fit, but I managed that by checking out when the bag was full and then going back for it.   It was a little awkward, and my on my second trip I got stuck in line for a while, but it worked out and I avoided the dread shopping cart vulture line.

The large item was a really cool M&M store display rack.  M&M stuff sells pretty well for me, so I have hopes for this one.  They actually had two of them, but the other one was too banged up for me.

The crowd was light, which was a real blessing. The aisles in Portland are so narrow that navigating them when the store is crowded can be nerve-wracking.  My first trip through the check out line was quick ans smooth.  I had a little bit of a time trying to get the check out person to understand that I didn't need a bag because I already had one.

I didn't find that super score in Portland, but I did get a Louisville Stoneware "Cookies for Santa" plate that will be a sure seller come Christmastime.  Louisville Stoneware is popular here, but hard to find at prices that allow for resale, so this was a nice surprise. 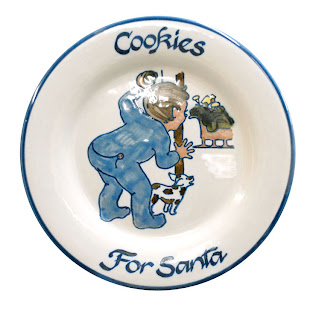 Image taken from Louisville Stoneware site.
At the Preston store, I couldn't find a decent bag on the racks, and I did find a few things that I really couldn't carry easily, which meant I had to do the cart vulture thing.  Honestly, the Preston store is much larger than the Portland store, so I don't understand why they don't have more carts.

For those of you who have never done it, this is the Unique Thrift shopping cart vulture routine:

1. Find someone waiting in line to check out.
2. Ask them if you can have their cart when they're done.
3. Stand there with them as they wait to check out.  This is a key step. If you don't guard your promised cart, then someone else will get it.
4. Take cart and go on your merry way.

It is extremely awkward, but it is an acceptable part of the social contract at Unique.  So is bringing your own cart, which is something I need to start doing.

Anyway, the Preston store was extremely crowded, so it took a long time to get through.  No real scores, but I did get a Bybee bowl.  They're another awesome local pottery I like to carry when I can find it at a good enough price to resell.  "Always, always, always get local stuff when you can," is one of my primary rules.  It doesn't matter whether it's local crafts or vintage memorabilia, local sells.

As always, one of the most interesting things is the people watching.  In Portland, there was a guy standing in the middle of one of the narrow aisles with a stuffed musical frog.  He was pressing the button to make it play music over and over and over, like it was favorite song or something.  Or else, he'd maybe somehow avoided seeing stuffed animals that play music all of his life until that moment and was extremely fascinated and bewildered by this new phenomenon.

Either way, he was blocking the damn aisle.  After about three rounds of frog music, I finally said "Excuse me," and tried to ease past him.  Would you believe he glared at me like I was interrupting some kind of private, intimate moment?  Dude, buy the damn frog and get a room.  But, first, get the hell out of my way.

One of the real surprises for me was the pricing.  Unique tends to be on the high side, so the only time I can really use them as a source is during the half-off days.  I noticed on Monday, though, that they're starting to swing down a little bit.  I didn't have to rely quite so much on cheap bagged sets to find bargains.  (Which is a good thin, since there weren't that many good bagged sets this time around.)

All in all, it was a fun day.  I got enough stuff to make the trip worthwhile.  Some of it will go in the booth this week.  Some of it will be held for the future.  I got some Valentine's items, which I desperately need, and I've started the stockpiling for Christmas 2011.  It's a never ending cycle.

The title of this post is an allusion to one of my favorite songs, Robin and Linda Williams' tribute to the late. great Hank Williams, "Rolling and Rambling." It's been on my mind a bit, since we just paseed the anniversary of his death.  (If you don't know, he died on New Year's Day.)   So to close out, here's Emmylou's version.  (I tried to find one by Robin and Linda, but couldn't turn up a good video of the two of them doing it.  Just some concert shaky cam jobs.)

Yes, I just turned a post about junking into one about Emmylou.  Anything can be turned into an Emmylou post, especially around here.  You're surprised?

And since one good video queen deserves another, check out Sue's video debut over at her blog.  I'm sorry she didn't make the cut.  I'd rather watch her than those Picker doofuses or that annoying Cash and Cari woman.
Posted by EM at 1/19/2011 05:00:00 AM

For a while one of my thrifts has a shortage of carts - so what I would do is go to the part of the store that has baby strollers and use one as my cart. Then when I checked out I would just say that I "changed my mind" and don't need the stroller after all.