This week finally begins the long-awaited (well, by me at least) "Your Vintage Religious Booklet Cover of the Day" series using the booklets I bought at a church sale in the beginning of February.  The reason it's taken so long to get to these is that I got really inspired with my blogging last month.  The whole month was planned out by Feb 5 and all written by Feb 10.  There just wasn't room for the booklets.  I didn't want to do double posting like I do with the vintage Christmas cards, because those are part of a special time of year.  Plus, I had that smattering of vintage Valentines going up as double posts, and I didn't want to overdo it.  I want to keep that specialness kind of reserved for the holidays and such.  I think it works better that way and doesn't look so much like I'm trying to pad my post total.

Since the booklets aren't tied to any particular time or season, I'm going to spread them throughout the month.  They'll be featured on Tuesdays and Thursdays in March as primary (solo) posts.  Hope you like them.  Look for the first one tomorrow.

I've gotten most of this month pre-written  and already uploaded, except for two posts and the Monday Rambles, which are always written on Sunday evening or Monday morning.  There's a lot of different stuff:  video posts, some image-based posts, and a couple of essays on various topics.  I'm trying to get a little bit ahead and build up a cushion for a couple of reasons.

First, I need some time to work on Top Secret Project Phase Two.  It's just about ready to debut, which should happen next week.  I need to make a few more tweaks first, however.

Second, my goal for the blog this month is to get all of the partially written drafts and posts that are just titles with (maybe) an outline finished and published.  Call it online spring cleaning, if you will.  Some of these have been hanging around for ages and ages and need to be done.  There are about enough that I can spread posts throughout the spring and summer.  We'll see.

As I write this on Sunday, we're battening down the hatches for a winter storm that's due in a few hours and which will snow us in again, according to the forecasts.  I am anticipating (but not hoping) not to work tomorrow.  The timing could not be worse.  I already have to miss one of my sessions on Tuesday to go to the cancer center for my six month follow up.  I always try to get my appointments scheduled early, so I can get in and out and not miss work.  This time, I was unable to get anything before mid-morning, and they're always backed up an hour or two by that point.  Rather than run the risk of missing work, I went ahead and made plans not to be there.  Interestingly (or ironically), I was supposed to pick up a few extra sessions this week, filling in for a colleague.

Speaking of the follow up, I got scanned on Friday in prep for that.  I always hate the scans, because they require an IV for the contrast, plus the yucky tasting oral contrast.  I'm so not into needles these days, thanks to the chemo.  This time around, it took two sticks to get it in, which for me is pretty good.  Would have been better if  the tech hadn't dug around with the first one to try and hit the vein.  Still, it's better than the alternative.  This time last year, I was finishing my radiation and scheduling the first chemo for later in the month.  Seems sort of like a distant, unpleasant memory.

Saturday was awesome, weather-wise.  It was the kind of day just made for going to sales.  Better yet, one of my most favorite church sales was going on.  They fill their gym with all kind of stuff--and I mean they fill it!  The last hour is half-price, so that's usually when we plan to show up.  I made two trips through, but didn't spend as much this year.  There wasn't as much stuff I was interested in this year.  I was more in furniture mode (last year I bought a bunch at this sale), and they just did not have a lot.

I did have one of those experiences/mad coincidences/total frustrations that only junking can provide.  At that sale, they had three vintage folding chairs that would have been only a dollar each at the half-price.  Thing is, I have several already at the booth, along with several other chairs, and they've all been there for a while.  I debated getting them and storing them, but the thought of doing that for an extended period of time did not appeal to me.  So, I took the "rational" course and left them behind.  What did I sell on Saturday?  THREE CHAIRS!  Sigh.

Even more interesting is the window that I took out of my storage at the Peddlers Mall on Saturday to take to the second booth.  I was also taking a shelf and some other stuff, so I ended up forgetting the window and leaving it in my PM booth.  I realized when I got home that I had left it at the Peddlers Mall and not taken it to the other booth and figured I would just grab it the next time I was in.  Guess what sold out of the wrong booth on Sunday?  A sale is a sale I guess.

I did get a couple of fun things during the rounds on Saturday: 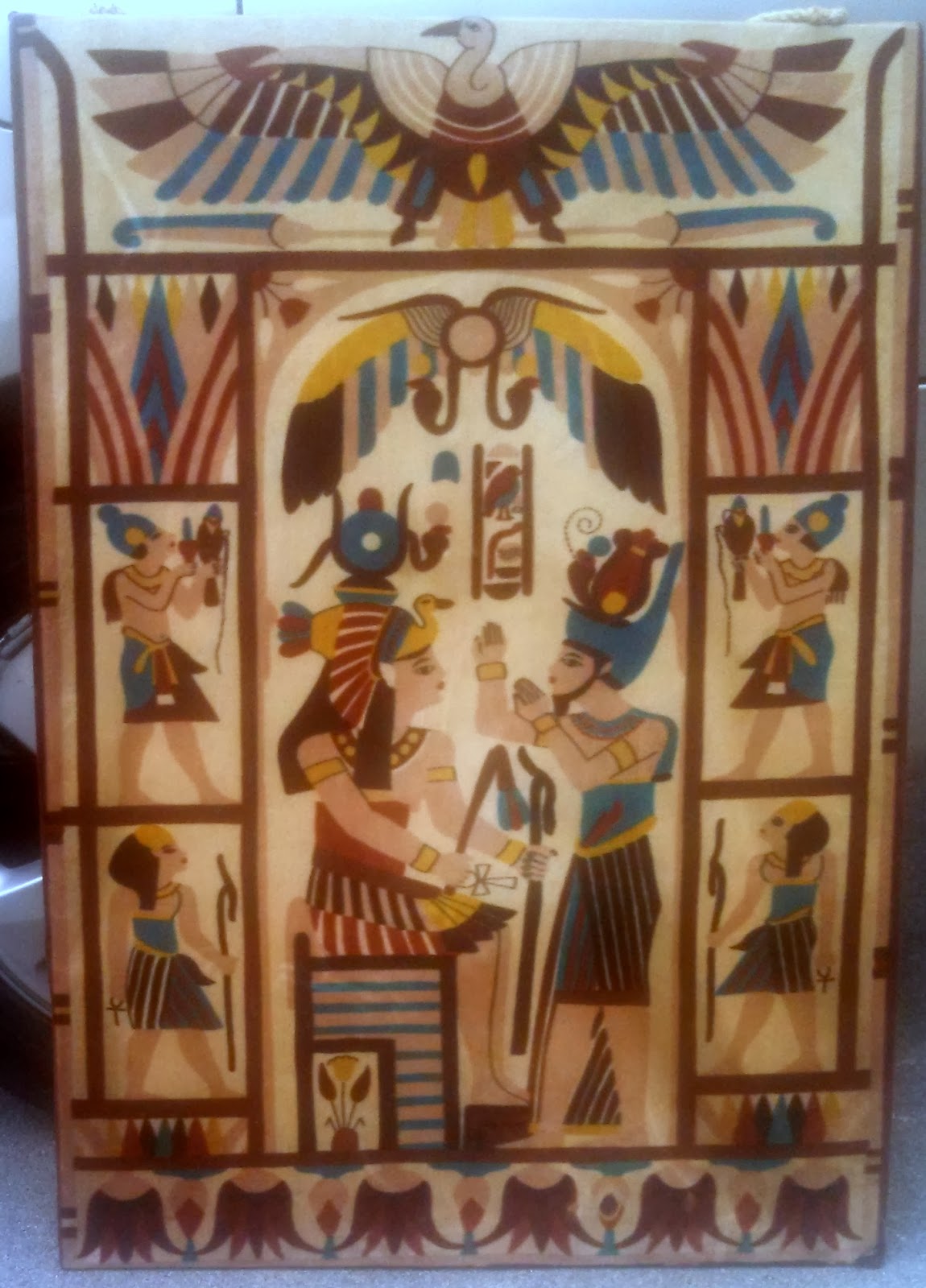 The Egyptian image is a felt-like material that has been stretched and stapled to a board.  It was sitting behind a bunch of other pictures at an estate sale.  The lady running the sale said that she did not know where her mother got it, but she sat it in front of the opening of her fireplace for ages.  It's got a little bow in the wood from sitting propped up for so long, but I think I can set some books on it for a while and work that back out.  I do have a lot of books, you know.  That was the find of the day.  Every time I look at it, I start humming this.

The umbrella thing is like a party or bar decoration, rather than anything practical.  It's in three pieces that fit together, and the umbrella is a burlap type fabric.  I didn't have time to open the umbrella up for the pic, but when I was taking it inside the Peddlers Mall, the cart it was in hit a bump, and the damn thing popped open!  Scared me to death!

That's our "new" ride in the background.  We went the used car route this time.  It's a mini-van with plenty of room for junk hauling.  I put a shelf in it to take to the second booth, and the whole thing slid right in with room to spare!  This might be the beginning of a beautiful relationship.

Happy Birthday to Roger this week!

Booth sales were solid last week at both sites.  I ended up with a banner week at the Peddlers Mall and that turned into a banner month.  It wasn't my record month, but it's in the top five.  I was very, very happy.  At the second site, it pushed me close, but did not quite make, rent.  Sigh!  Still rethinking that one.  What to do?  What to do?
Posted by EM at 3/03/2014 05:00:00 AM

Though your Christian iconography WOULD be perfect for Lent and/or Easter, I imagine.

Memories of chemo / needles sure don't fade very fast. We go to the appointments, follow the directions given, lay very still and then wait for the results. I am still more tired this year than I was in the 'before all that stuff' year. February sales were 'ok' but not great. Love the didn't buy it/sold three chairs, happens when least expected. We got snow on Sunday (highly unusual) on Coastal BC. I have been writing posts ahead too and I add to them as additional ideas occur. Takes the stress of thinking something up to blog about. Nice to visit today.
Joy