Taking it to the streets! (Part I)

A few times a year, the city allows residents to set out large items for junk collection.  Our most recent set out period came the weekend after we got back from San Francisco.  Like everything else, it can be hit or miss.  Some years are veritable junk smorgasbords, while others are famines.  Since our last period was in January, when I was tied up with moving out of a closing store and had no time to go out and hunt junk, I was hoping that this one would be a good one.

Junk set out is an interesting time, at least in our neighborhood.   It's supposed to be a time when folks set out large items, like furniture and appliances, that the trucks can't handle during regular weekly trash pick up.  Of course, these items can be taken to the dump, but not everyone has the ability to haul them or pay the dump fees.

What really happens is that people start getting rid of anything in their houses that is broken or that they do not want, regardless of size.  Boxes and bags of stuff pile up alongside the furniture and appliances.  Usually, there are a lot of signs of recent remodeling--cabinets, trim, carpet, etc.--as well.  Keith and I have a running joke that it's not really junk set out until you see the first toilet.  This time around, there were a plethora of potties.  Dozens.

One of our across the street neighbors always has a HUGE pile every set out.  It's always the same kind of stuff, too!  Couches, beds, carpet, tables--all smashed and ruined.  I simply cannot imagine what goes on in that house.  I probably don't want to, either.

Residents are given a weekend to put things out.  Nothing is supposed to go out before the designated Friday or after Sunday evening.  Some time during the next week, the trucks will be by to haul everything off.  In reality, stuff starts appearing on the Wednesday before the designated Friday and the piles keep growing until the trucks pass through.  As long as it doesn't rain, there can be good picking all week.  If you can beat the scrappers, that is. 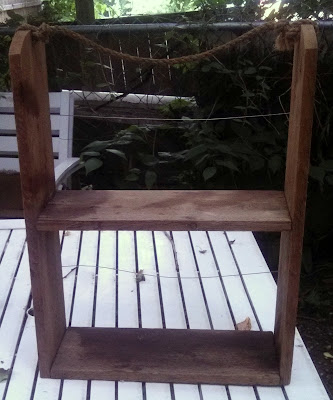 This shelf is upside down, but I have no way to hang it rightside up in the backyard.  I love the rope at the bottom.  Makes me think of horse barns. 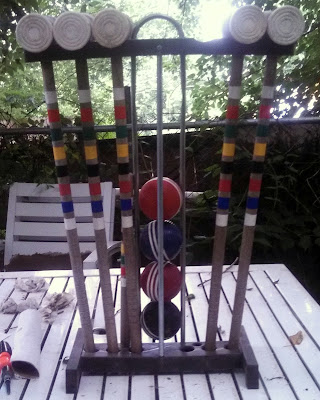 The croquet set is modern and incomplete.  I had to toss one mallet because the handle had split all the way down.  The balls are just compressed wood particles and two of them had split open as well.  I still think it would make a fun porch decoration.  I kept the head for the mallet I tossed, because why not?  The wood parts has some kind of weird veneer or finish on them that was peeling off.  Underneath, the wood had a really nice patina, so I peeled it all off as much as I could. 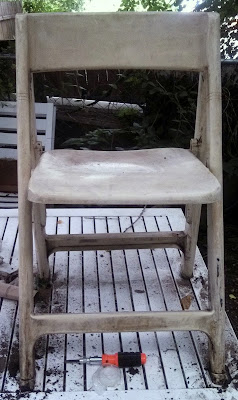 I think lots of perfectly good stuff gets set out simply because the owner doesn't want to clean it up.  Case in point this outdoor chair, which still needs a hit or two of Oxyclean, but will be just fine when I am done.  Sometimes, things have sat outside like this one without being tended.  Other stuff comes right out of basements or attics and just needs wiping off to be perfectly useable. 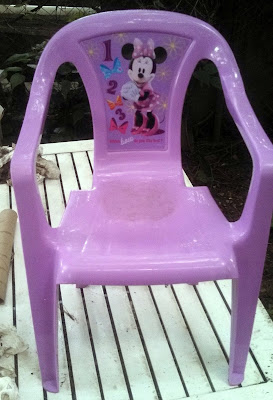 Like this Minnie chair.  The only thing wrong with it was that stain in the seat, which wiped up in like five seconds.  For that, it had been consigned to the middle of a junk pile. 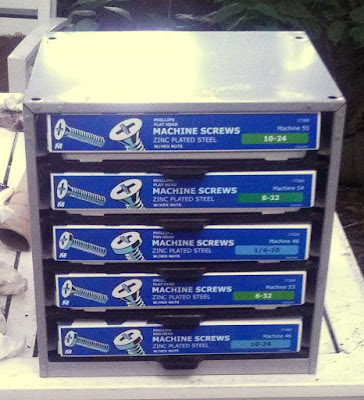 I found three of these hardware sorters/retail displays.  I think they are kind of cool and could have a lot of uses.  I found them after dark the first night and made three trips back to the house with them.  (I was on foot.)  I knew if I left them, the early Monday morning scrappers would get them and that would be that. 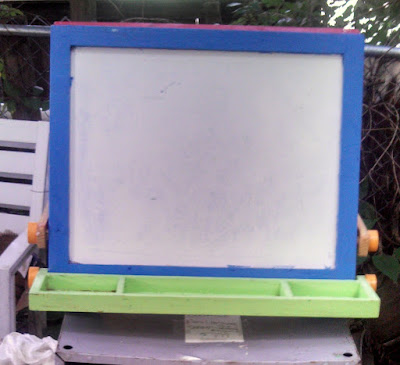 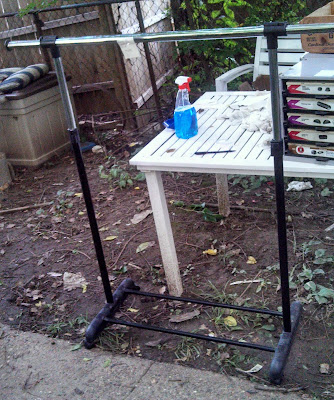 Garment rack.  This was the only thing that was sitting in front of the house where I found it.  It's kind of like they said "It's set out time!  Where's something I don't need?  Here!  Take this!"  And out it went.

I have this thing about making a mess when I curb dive, so I never dig too deeply into boxes and bags. I usually skim the top boxes in a pile and go on, because I don't want to waste valuable time repacking and restacking things.  I figure that way, I'm leaving stuff for the next picker that comes along.  There's usually more than enough to share.

Another reason to beat the scrappers is that most of them don't care about the mess they make and leave.  I don't want to be blamed for someone else's ways.

I don't want to tear open bags and leave them there with holes so I usually leave them alone.  Bags sometimes have icky stuff in them too and I don't like dealing with icky stuff.  Who does?  I always end up with some good stuff that isn't quite my "vibe" but I take it because it will sell and it's free.  If I'm paying for stuff, I like to kind of stick with stuff that fits my established groove for the most part. 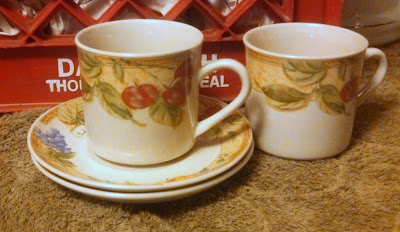 These cups and saucers were still in the box that the whole set of dishes came in, like they just took out the plates and bowls and set the rest right outside.  There was a dude doing renovations on the house next door to the pile where I found them.  He kept carrying drywall and crap out to the big dumpster set in front of the house and giving me the evil eye while I was digging.

I think he was daring me to try and take something out of his dumpster, as if I would want any of that dusty stuff!  Besides, I had peeked in it the week before and there wasn't anything good. 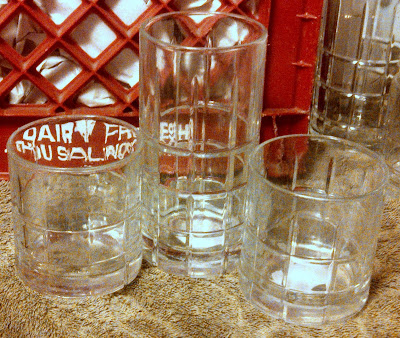 I love these glasses!  There were a bunch of them in both sizes.  They're quite heavy, too. 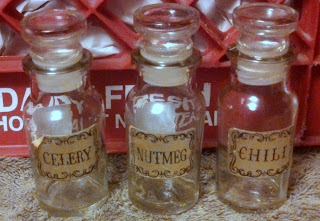 Spice jars.  I sell lots of these.  I think I'll leave the labels on these and sell as is, instead of stripping them and putting something in them.  I found about ten of them.  It seems like there is a stash of them every set out. 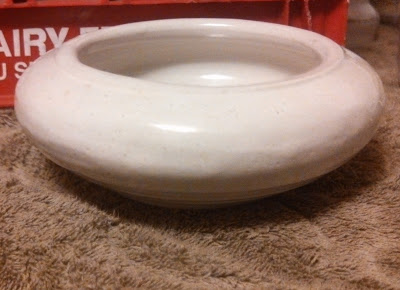 Heavy vintage pottery planter.  It's got that cool feel that only older pottery seems to have. 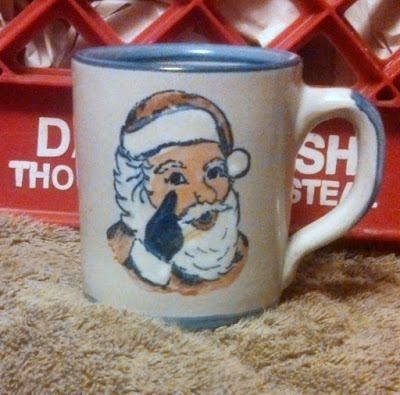 Louisville Stoneware Christmas cup.  Sweet!  I think this is an older one.  Never can tell what you'll find in them boxes. 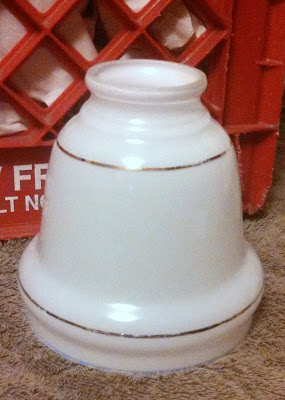 There were three glass light shades, but one was already broken when I found them.  Butterfingers here broke the other one, leaving just a sole survivor.

That milk crate in the background was a find too.  There were two of them, both with the same prohibition. 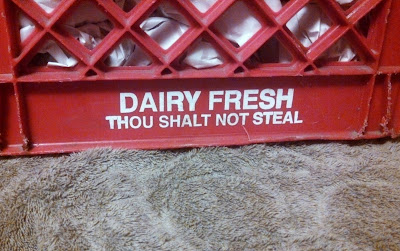 It seems to me that any stealing was done by the persons who originally acquired these crates for personal use way back when.  I just picked them up off a curb, not from behind a convenient.  That;'s my story and I am sticking to it.  Besides, God told me it was okay.  He doesn't want them to go to the landfill either.  After all, isn't "waste not, want not" also in the Bible?  No?  Well, the Puritans or some of them folks said it.  That has to count for something.

I always end up with kind of mixed feelings about junk set out.  On the one hand, it's a great source of free merch.  I'm also saving good, useable items from the landfill.  As far as I know, there's no ordinance that prohibits picking, but I'm not sure it would stop me if there were.  It just makes me a little sad when I see enough stuff to stock a decent yard sale or a thrift store donation just tossed out like folks couldn't be bothered with it any longer.

Nothing in our community like that. Surrounding towns have had them and cancelled because of the expense of picking up what was left over I think.

The nest town over used to have a clean up week. It was like the best yard sale EVER and it was all FREEEEEE. People would set things up all nice like a display because they wanted you to take it before the trash truck came for it. This was back before I knew about blowmolds - there was one on every block. MAN I wish I knew then what I know know. I love the little hardware sorters - glad you saved those from the scrappers. Can't wait for the next installment!

About ten years ago our town decided no more curbside free piles. All had to fit into the huge trash container they gave each resident or you had to haul it off to the landfill. Some people continued to do it and the city would come by and spray paint the items bright orange. I have seen many a beautiful piece of furniture ruined like this. Love the dairy crates. I once asked a convenience store about some Coke crates which had been behind the store for months. I was told to take them if I wanted them because the Coke guy refused to pick them up. I sold all ten and they did not go near the landfill!

Wow, what a gold mine! We have a big claw truck that takes trash and yard waste every Thursday. Wednesday night is when the pickers come through the development. They take anything and everything that's left out. You have to be really quick if you see something good. I got some dining room chairs from the neighbor across the street and gave them to my BIL to refinish.

Nothing like that here that I know of. College move out day is the closest I've come to seeing tons of stuff on the curb or by the dumpsters. You found some great stuff and all FREE!!! More please!