It's the return on the Masked Man! 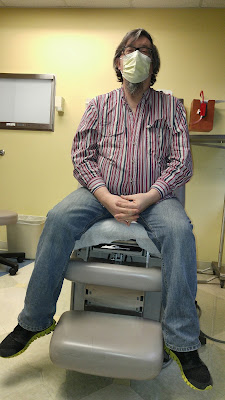 For once, I was having a halfway decent hair day last week on cancer center day.  Good thing too, because I got interviewed by a local TV station for a story about the drug I'm on.  I don't know yet when it will air, but I'll post links and such when I do.

New Blog Recommendation:  Look What I Found! is another trash-picking and selling blog, but the author lives in the Netherlands, which gives her varied and more interesting outlets for finding and selling stuff.  She also makes things to sell, and there are cats.  I've read back through the last few years of posts and quite enjoyed it.  Give it a look.

And speaking of things that I found that I'm kind of fond of, take a listen to this:

Also, Lara at Pretty Quirky did a round up of blog posts all about the booth business that's worth checking out. (Even if she didn't include a certain handsome, if shaggy, intelligent, if goofy, dude we've all come to love and enjoy.  Sniff!)

Also, another fun blog I've been meaning to recommend for a while, but kept forgetting, is Stories of Objects.  I really love her sparse, almost minimalist, vibe. Since she's another European, her stuff and her stories have a different flair to them than what you might be used to.  I will say that her header photo might unnerve you a bit, so be ready for it. I think it's kind of cool, but that's just me.

One of these days, I shall have to make a blogroll and incorporate all this good reading!  (Plus the many blogs that belong to you great people!)

Tuesdays seemed to be cursed, sales-wise, for me right now.  I'm in this pattern where I have a good weekend, a strong Monday, and then a really crappy Tuesday.  Not at all sure what that's about.  It's still a good month overall, though.

This weekend was particularly good.  I was there all day on Saturday and the place was packed!  Every shopper seemed to have a cart just crammed with stuff.  at one point, it felt like everyone in the store was in my aisle at the same time.  I had been a little worried, since it was really, really nice both days.  I was afraid that after the bad weather we'd been having that people would want to be outside on a nice weekend, rather than cooped up in the mall buying my awesome junk.  Happily, I was wrong about that!  Junk triumphs over nice weather!

By the way, I'm really kind of amazed by the number of you who say that your sales go UP on bad weather days.  It can be hit or miss here.  If it's rainy, that'll drive the folks indoors to shop, but if it's wintry, around here they tend to stay home.

I'm also surprised by the stories of how slow it can be this time of year for booth sales.  This is our busiest time of the year.  Once the tax money starts rolling in, so do the customers.  I don't know if it's a regional thing or that fact that I'm in a flea market flea market that makes the difference.  Our slump season is the summer.

I spent Thursday and Friday at the booth, bringing my brand of order to my brand of chaos.  I went in with a nice load from Sorrow Mountain and the Hillock, thinking that I really didn't have too much to do other than put it all out.  With that thought in mind, I decided to tackle a couple of other jobs that I haven't had the time to do lately.

At least for once I wasn't out in the aisle with my stuff, because there was an empty booth next to my spaces where I had plopped my boxes.  I never block an aisle and I keep my stuff far away from other booths when I work.  The end result is that all access to my own stuff is pretty much blockaded until I get done.  Despite this, a couple of my neighbors constantly complain about me and my stuff, which is never anywhere near their booths and is crammed as closely up to my own spaces as I can get it.

So, I'm working along, happy for once that no one can complain about anything I'm doing, when along comes the folks who have just rented the space where I'm plopping.  Of course, I cleared out right away, but I still got the stink-eye.  It seems I am forever cursed to be hated by my neighbors!

At least, I got everything done!  All of my religious books are in the booth (finally)!  Valentine's stuff is gone.  Some Easter is out.  (I found a couple of boxes of Easter on the Mount of Sorrows that I had forgotten about.)  I still have a few Easter things in the shed to dig out.  I have a little more Easter than I really like right now, but I caught a 90% off sale last year where they still had some BIG items left, so I got a couple.  We'll see what happens. I have about one more half-load of stuff on the Hillock to take out, and then it will be time to close it down!  Woo hoo!

I ended up working from open to close on Saturday.  I was exhausted by the end of the day.  About midway through the day, one of my favorite vendors came in.  He's got two booths, one about halfway down the aisle from me and one the next aisle over.  His booths are kind of like topsy-turvy land.  Stuff that should be high-priced is super-cheap and the stuff that should be super-cheap is way too high.

I ended up buying this: 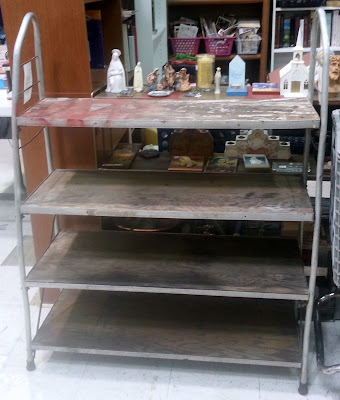 It was way cheaper than I would have expected and is the right size for holding board games and puzzles in my booth.  I also got some small things from him, including some vintage Fisher-Price. A little later in the day three guys came by looking for glass jars.  I know this dealer always has tons of cheap jars, so I sent them to his booths.  Later, I saw them checking out with a bunch of them.  I felt like I repaid him for all the good stuff I got.

I did hit one garage sale on my way to the mall.  It was the only one worth stopping at.  I already had Mazda loaded with stuff for the booth, so I didn't take a Mazda shot.  It would not have been fair to the new stuff.

This is the sale by the dealer that lives not far from us with great stuff and good prices.  I told Keith as we were leaving with Mazda about half full that this would be the day I found a ton of stuff from him, just because the van space was so limited. 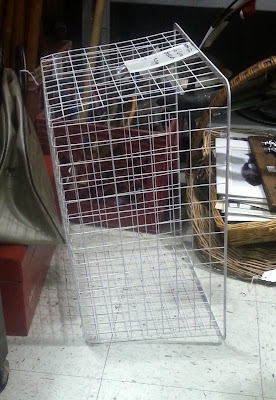 There were two of these extra large wire baskets.  Only this one made it into the pic.  The other one turned out to be quite camera-shy. 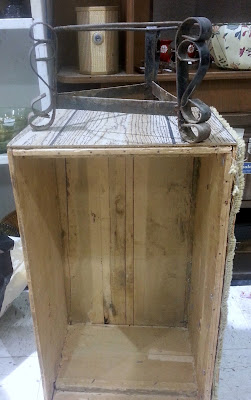 Fun wrought iron plant stand and a really interesting box.  Really interesting.  I think the box itself is kind of old.  The wood looks like it.  It has tiny, old metal casters on the bottom that barely roll.  Along the way, someone attached paneling to the ends of the box and carpet to one side.  Quirky. 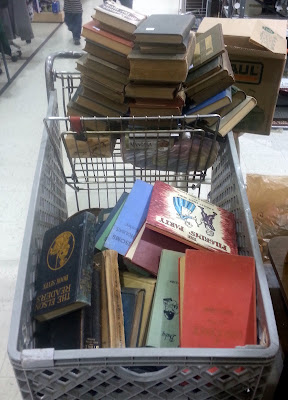 All these books!  Two U-Haul boxes full of them.  I saw one of them and it was marked five bucks.  I pulled the tag off and added it to my pile.  Then the seller tells me he's got another one that he'll let me have for four, so I take it too.

Just then, another guy there starts trying to get down in the second box as I'm checking it out and taking it to my stash.   "What you got there?  Anything good"  Not cool, dude! 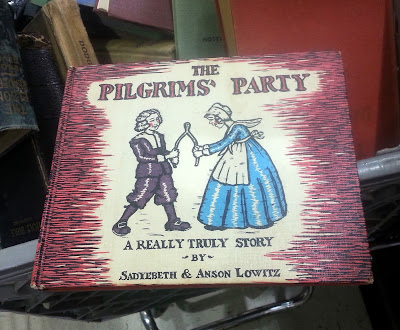 This one is my favorite book of the batch.  It's also the only picture book.  There were a lot of old textbooks, several old Bibles (LOVE!), some old religious books, a few novels, and several books from the Five Little Peppers series.  All in all, a really nice haul. 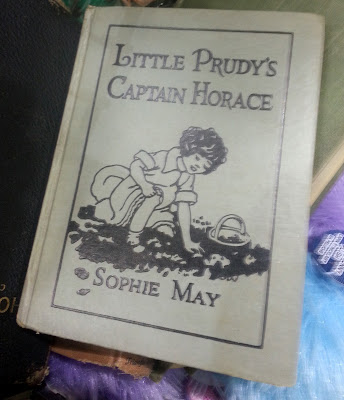 This is my second favorite from the lot.  Sadly, there are no illustrations inside to match that sweet cover. 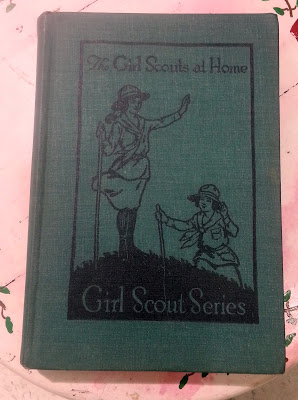 This book yielded one of the most awesome surprises I have ever found tucked inside a book..... 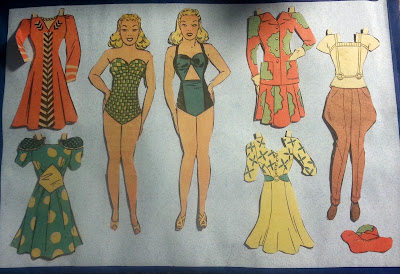 Cut right out from the newspaper!  How fun is that???  They remind me of those wonderful Golden Age Katy Keene comic books.  Of course, she wasn't the only comic in the 40's to have paper dolls, but it's one of my favorites.  There was a brief Katy revival in the 80's, which I totally loved, even if I did slip her in between the Batman comics in my stash at the comic shop.

There was also another really fun item of great historical interest in another book, but I'm saving it for another day.  Those are the highlights from the haul.  I also got five toy guitars and a framed golf poster, but didn't get pictures.  Combined with what was already in Mazda, I filled it up!

Not much on tap for this week.  The weather is supposed to be okay for a couple of days, so I'm going to spend some time in the back yard cleaning the last of the curb finds, so they can head to the booth.

I have a couple of fine-tuning booth touches that need to be done and I need to finish my Easter display.  Once I get everything done, I'll take some pictures for you nice people.  I haven't done that in a while.

You are looking fine masked man!! Happy you got so much work done in your booth. Love the old books and the paper dolls..score! You sound perky and happy.
hugs,
Linda

Awesome finds! Would have loved to find those boxes of books! And the wire baskets. And the old box with castors! Cool! :)

You are looking good! Glad it's going well for you. Love the sweet old books and baskets.

'and there are cats'. I like it!
Thanks for linking to my blog, hope your readers will enjoy it too.