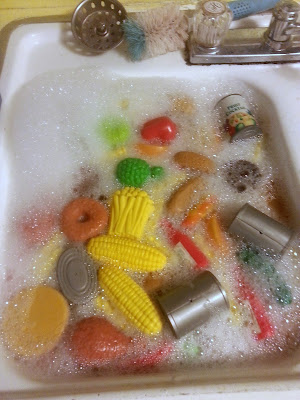 I love play food.  I really do.  I sell bags of it all the time.  Every now and then, I find a batch that's a little on the dirty side.  Like this batch that Keith discovered when he was cleaning out the dark corners of the living room.

I actually bought this a while back and set it aside for a day when I felt like cleaning it.  Since pigs never started flying, that day kind of didn't roll around too quickly.  I bought it from a yard sale where I found it all sitting in a giant salad bowl shaped like a clam shell.  The whole thing, bowl included, was just a buck, which is why I got it.  Typically, I pass on stuff this dirty, unless there's something unique about it.

The salad bowl was actually really nice, and I cleaned it up and sold it a while ago.  Now it's time to get this food out.  After this, I've got some toy soldiers to clean, along with a bunch of Happy Meal toys, mostly super-heroes.  They were a curb find from a couple of years ago that were hiding in the living room with the play food.  I think there was some kind of party going on.

The most favorite play food set I ever found was this amazing sushi set from a year or so ago.  I've never seen anything like it before or since.  One time, on another blog, I saw a KFC play food set that came in a KFC bucket.  I've been wanting to find one for myself ever since.  It would be too cool.

Little Tikes food is always on my list of things to hunt for when I go out.  One time, I bought an LT BBQ grill set that still had a lot of the food and utensils with it.  I sold the grill and food/utensils separately and made almost as much on the little stuff as I did the grill.

So many of the small components that come with LT sets get lost, which means that people are always looking for them.  Accessories from older, retired sets used to bring decent prices online.  (I haven't checked on any of them in a while, so that might have changed.)  Since these parts are usually small, they're easier to ship too.  Typically, it's the kind of stuff that's really cheap at yard sales, but makes digging through a box of little toys worthwhile.

Whenever I sell Little Tikes food (or other accessories), I make sure to include the LT name on the tag. It means something to shoppers, so it can ensure a sale, especially if the price is right.

Now, if you will excuse me, I have play food to wash.

HA HA! The things that we will do for a sale!!! We have a strict rule in our house that J & I will NOT buy any clothes for ourselves that need to be ironed ~ however he did catch me with the ironing brd out the other day doing a QUICK straightening of a batch of ladies hankies that we picked up at a sale for a song!!

And I thought I was crazy for washing horse shoes in the cold yesterday. I wondered why old men are seen walking about the thrifts with bags of this stuff. Now I know - flea market dealer.

The corner of your living room thanks you Eddie.
Joy

I love play food! I have children's Tupperware sets that I saved when my girls were young and Tiger loved them and now Scout will enjoy them. Kept some at Grandma's! No food though, you've given me something to look for!
hugs
Linda

I hate laundry and dishes. Yet I will wash and iron tablecloths or soak pottery and toys. It's fun to do that! I still have my play food from when I was little. The canned goods are tiny. Like 2" tall. Not very realistic - but I loved those things! I bought my Mom a KFC play set once for Christmas. She loves KFC (But never eats it).

When my daughter was little she had a nice set of play veggies. Each veggie had two halves and were joined in the center with velcro. It came with a plastic knife so she could pretend to cut them in half.