Bursting Forth! (Out of Mazda!)

I'm not sure what happened earlier wit the blank post, but I deleted it.  I had been working on this post last night and went to bed with the post still up on screen.  I had treatment yesterday, so I usually spend the next day or so dropping in and out of projects to lay down.  My computer was off when I woke up today, so it must have crashed overnight.  How that led to a blank post getting uploaded, especially when the draft had some content in it, is beyond me.

I guess every so often I have to prove, however unwittingly, what a low-brow, amateur production this blog is.  I can cross that off today's "to do" list.

How about we look at what was in Mazda?  Most everybody got most of the major bits, but there were some surprises here and there.  For instance, the rusty cash box in front was full of bits of hardware that are destined for a jar or two. 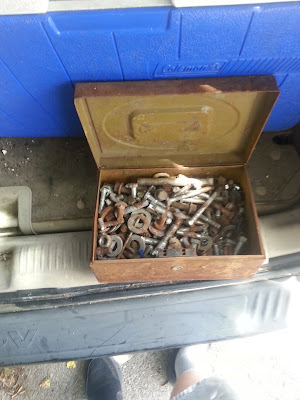 I thought I got a pic of that bag of thread, but I guess I didn't. Still, everyone who said it was thread was right.  Even though, I sure do wish it was a bag of wheels (especially roller skate wheels), because that would be cool. 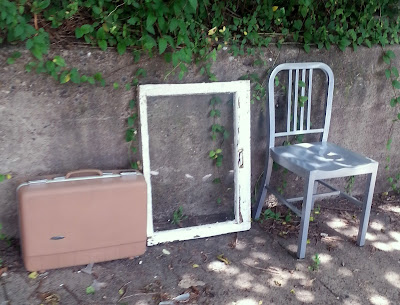 Otherwise, it was Pairs Day, because most everything came in twos.  Not necessarily matching pairs, but they were found in pairs.  Except for the industrial look chair on the end, which is a repro, but a well-made one.  All heavy-duty metal. The window (which is part of a pair) was a curb find on the way home from the yard sale.  I've sold all the windows from our set out, so I really needed those.

Like I said on Sunday, I wasn't really intending to go to any sales at all on Saturday.  Keith was going camping and making really optimistic proclamations about leaving  by noon, which never happens, yard sales or not.

Then Friday night, I saw a listing for a sale that was not to be missed, camping or not.  There's a woman who lives on a street not far from here who has a garage, attic, shed, basement, and house full of wonderful junk.  She at one point tried to be a vendor, but told me she never got around to actually taking stuff to her booth.  She and her boyfriend would buy a big batch of stuff  at auction, bring it home, store it, then a year later, sell it cut-rate at their yard sale to make room for more auction buys.

Not exactly the most effective re-selling plan, I admit, but it worked for me.  And I made sure the stuff I bought got to the booth.  Regardless of any other issues, she had good taste and a good eye for stuff.  Things from her sales have always sold fast for me and made good money.

So, when I saw the listing that said she was having a moving sale, my first response was:  "Gotta go!"  My second responses was:  "Oh no!  She can't move!"  The third response was: "Really gotta go!"

And so I broke my "no sale" vow.  But it was only for one.  That turned into two, because we found another sale on the same street and went to it first thinking we were at her sale, but we weren't.  That's where I got the metal chair. 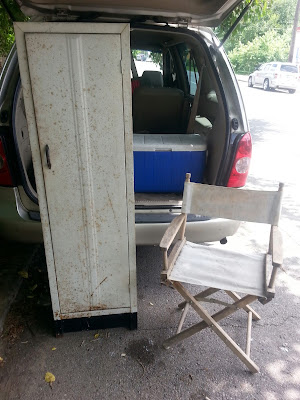 In case you're wondering why I'm only showing one of each item when it was Pairs Day, I was trying to get the car cleaned out in a hurry, so Keith could load up and leave.  This was my favorite of the two metal cabinets.  I love the detail on the front.  They were both shop/garage cabinets, so I did have some greasy grime to scrub off.

Now, on to the two items that perplexed nearly everyone.  I actually bought these on Friday, while I was on my way to meet Keith for coffee. Because of their size, I had to leave them until Saturday, when Mazda was available. 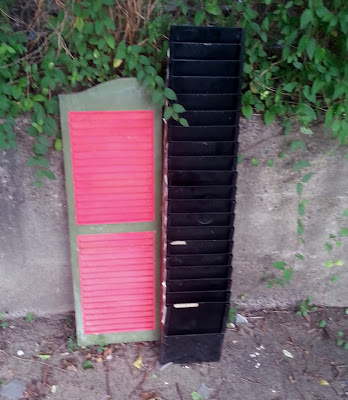 It's an old metal file organizer thing for a wall.  It's all one piece, instead of several joined together.  Plus, a swinging door, but only one half of it.  I loved the color though.  It's more orangey in person.

Good junk. I guessed a good bit of it. Today is my gallbladder surgery and I am ready to get that done. Two days in the hospital with no food or drink sucks, but so does pain.
Hugs!!

Yay I got some right! Good junk, all around!

Pairs and a few spares - love the windows and the metal cabinets. There wasn't any great sales here last week. There is an estate sale going on until Saturday - I am hoping for discount prices!

I had a guy that had yard sales a few times a year. He worked at the University and would bring home anything destined for the trash. He would always tell me - "that came out of the coach's office" or wherever he got it - I always kept the story with the item and made a mint off his sales! But, alas, he moved and I am poor once again.

We will find some roller skate wheels, I betcha!