Stuff I Haven't Shown You

I'm not hitting any sales right now at all, in an effort to work through some of my eternal backlog.  It's actually starting to work.  I plan on keeping this up until the October junk set out, with an exception for the Labor Day Big Flea and a Highway 127 stop in August, provided I can talk Keith into it.  I will, however, be constantly on the hunt for freebies, since finding free stuff isn't shopping.  I may have to bend the rules if I start to run low on specific stuff, like manga or comics, that are always good sellers for me.

As I'm digging  into the stuff, I'm finding things that are quite blog-worthy, even if they aren't current finds.  Since the current finds will be scarce for a while, I'm going to share these other finds in posts I'll be calling "Stuff I Haven't Shown You."  Or "Stuff I Didn't Show You."  Or something like that.

I found this puppy at Goodwill for a DOLLAR! 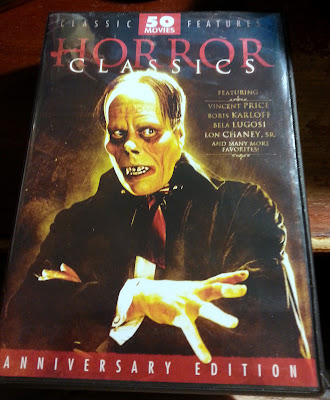 I am now in B Movie heaven!  I needed this too.  It's good for at least a couple oddball film festivals.  You gotta have some downtime after working the booths, you know.


Super-cute kitty creamer.  It reminds me of something you would find in one of Linda's cubbies.  With the paw extended to form the spout like that, it also reminds me of a certain handsome furry fellow. 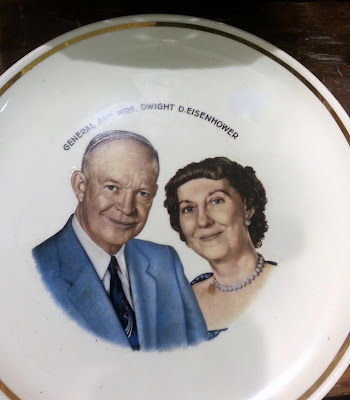 I fell in love with this Ike and Mamie plate, solely for the look on her face. 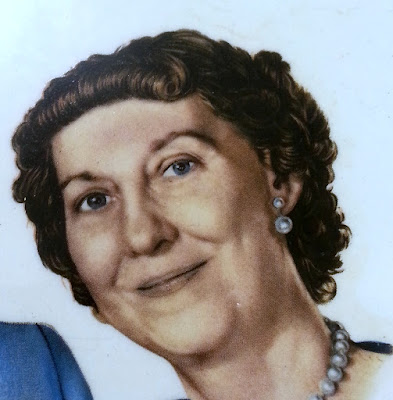 Doesn't she look like she's up to something, or at the very least knows something he doesn't? 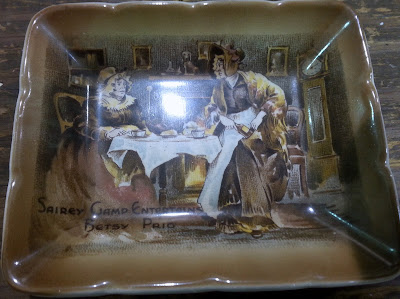 The scene in this little dish just cracks me up.  Sorry about the glare.  The caption reads:  "Sairey Gamp Entertains Betsy Prio."  How can you not love it?  It's the kind of thing I would have put in my mother's Christmas stocking. 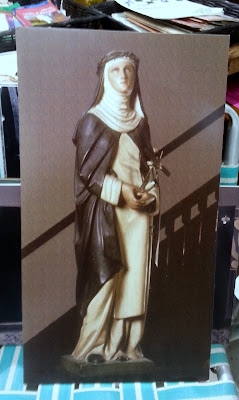 I got several large pictures with religious themes mounted on foamboard at a yard sale a while back.   On the back, a lot of them have the initials "CHF" on them, which stands for Cathedral Heritage Foundation.  I am thinking that these were some of the presentation pieces used for fundraising for the renovation of the cathedral here, which took place about ten or so years ago. 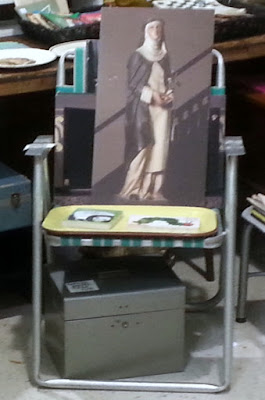 Backing that shot up, since the pics are already at the booth, you can see an aluminum lawn chair and an extremely large metal file box. 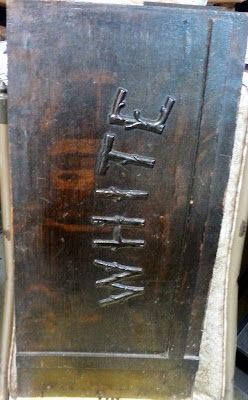 On the way to a sale, I found what seem to be the busted pieces of an old sewing machine in an alley.  I salvaged the ones that were most intact and interesting, including this one, which I'm thinking is the logo for the manufacturer.

Finally, what do you do with your comics when you're through with them?  Why, compost them, of course! 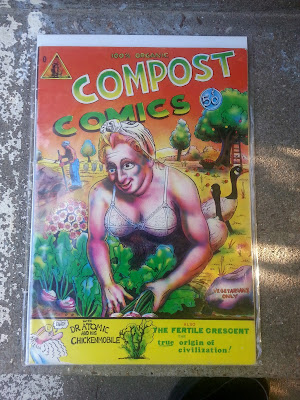 Just kidding.  Actually, you send them to me.  This oddity was a Free Comic Book Day find.  It's a prime example of some of the really strange things that got published during the underground comix era.  I love weird stuff like this!
That's it for this round.  I'll try to do these once a week or so.
Posted by EM at 7/19/2016 03:47:00 AM

This is fun! I love seeing your random stuff. Oh and guess who also has that kitty creamer...yep me! You are so right it is something you would see at Linda's!! I miss Chiquito photos by the way! Hugs!!

White was a sewing machine brand. I still garage sale hunt but the volume I bring home can often fit in one box, getting pretty selective since my hoard? of stuff fills a shed +.
Hugs.
joy

While I was reading this I was watching Storage Wars and they found a ton of comic books. You would be a happy camper! I bought an interesting piece of religious "art" this weekend. Well, it was free, but I brought it home. I will have to send you a picture of it. It screamed EDDIE. No, really, it did!

Those old horror movies are the best! Especially on a rainy night with a big bowl of popcorn. You've got a fun eclectic mix of stuff here. :)

I haven't shopped since mid June... however I keep discovering new stuff in my house/garage to bring to the booths!