Things I Used to Own

One of those fun little thrills of junking happens when you find something that you used to own.  I don't necessarily mean the exact item, although that has happened to several people I know, including me.  (I once found several comics with my name on them at a local flea market when I was a kid.)

Most commonly, this involves finding something just like one you used ot have or another copy of a thing you had.  Like this book: 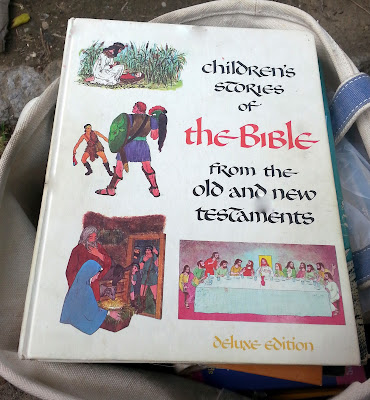 When I was about 8 or 9, my tonsils were removed.  My grandparents got me this book as a get well gift.  I don't know whatever happened to my copy, but I think it probably was given away during one of the purges my mother did after my parents divorced.  We moved a few times after that, but every place we lived was a lot smaller than the house my parents had bought.  Some stuff had to go.

I found this copy at a book sale and just had to pick it up.  I was immediately struck by the illustrations.  Instead of the serene reverence of a lot of religious art, these figures all have an almost tangible sense of action and power.

Take these pics of some of the Minor Prophets from the Old Testament.  I can just imagine the guys in these drawings giving the dishonest and corrupt of their era seven different kinds of holy hell. 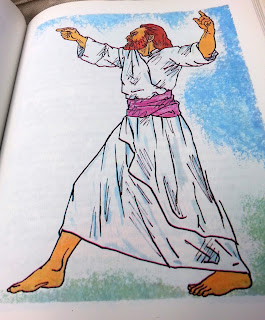 This is Jonah raging at Nineveh.  Is it any wonder the city repented?  He almost looks fanatical here! 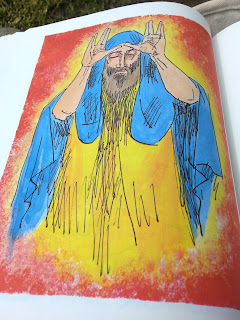 Next we have Micah, who appears to be getting ready to go to a Star Trek convention.  Not sure what's up with the hand signs, but love the colors in this one. 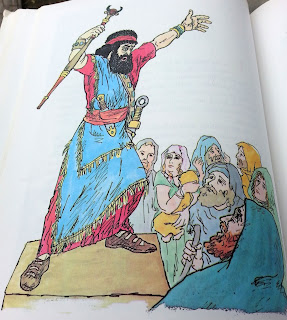 I forget who this one is (I didn't take notes when I took the pics), but doesn't he look ferocious?  It's all quite different from the tranquil images of saints at prayer that I'm used to seeing.  I really like it. 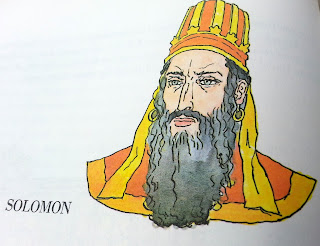 Finally, for some contrast, we have Solomon, who was quite the snazzy dresser, it seems.

Email ThisBlogThis!Share to TwitterShare to FacebookShare to Pinterest
Labels: pics, religious art, stuff, stuff I find in a pile of books

I too find stuff I use to have. Books are the best and old toys. Mostly I find things from my kids era! I love that book, I can see Tiger enjoying it as he is all about super hero's now!

We had that book growing up. My brother was convinced it was a book about super heroes. I find things like the things I once owned. Things seem to revolve about the sun like Earth.

I found an electric bun warmer at a thrift once. I instantly remembered plugging one in for our rolls at Thanksgiving. I hadn't thought of it since I was a kid. Because I saved most of my childhood, I rarely find anything that I used to own because I still own it!

My childhood Bible scared me. The pictures were all frightening to me. Probably why I'm not much of a bible reader/church goer as an adult.

If I find something from our childhood I always buy it and then gift it to my brother or sister. My brother keeps asking me to stop treating him like he's 8 years old :)