So, I stayed in and out of the snow for yesterday.   Sadly, I have to get out in the cold today, as there are booth things that have to be done.  I'd much prefer to stay in and out of it all again.  Oh well.

I managed to get quite a bit done during my mini-sojourn in the warmth, including sorting some photos on my phone.  I had a whole bunch of stuff taken throughout November and December, but never got around to posting.  Despite my best intentions and because of my somewhat less than best efforts, I managed to fall into my standard pattern of spending December overwhelmed and under-blogged.

Or at least, that's the story I'm telling the people.  The truth is far, far darker. 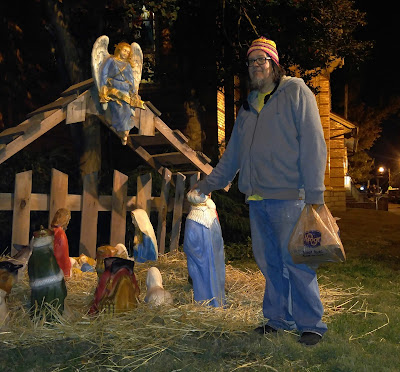 I was in jail for molesting a Wise Man in public at an outdoor church Nativity scene.  Oh, the shame!

Actually, that's a cover story concocted to conceal my activities as Spider-Ed from my enemies. 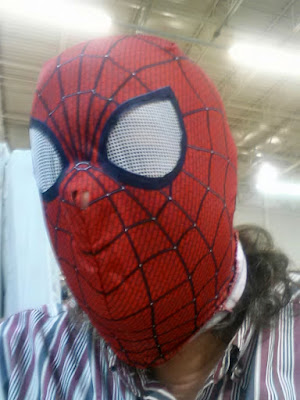 Or I could just be clowning around as usual.  Take your pick.  The Spider-Man mask is for sale at the booth.  I was testing to see if it really was one size fits all.  By the way, do not that the proper spelling of "Spider-Man" includes a hyphen.

As for the Wise Man incident, we were out at our favorite holiday activity, when I decided that I was finally going to see what those amazing Nativity figures were made out of.  Every year for as long as I have been in Louisville (30 years as of this fall), they've been placed in front of that church.  I imagine they're even older than that, since it would be kind of pretentious of me to assume that they just started using them in honor of my arrival in town.

Turns out, they're blow molds!  I've never seen any like that anywhere else.  They are so incredibly detailed and well made. 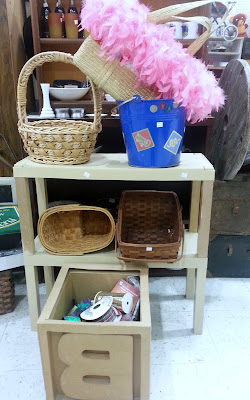 Curb finds!  Some former neighbors of ours operated a restaurant not far from us that was a combination BBQ joint and (over-priced) junk store.  They closed the whole operation down recently and have been placing things out on the curb, bit by bit.  And I've been picking them up, bit by bit.  This was a recent batch.  Like I'm really gonna pass up a feather boa purse!

The little block is filled with craft supplies.  I gave some to another vendor and have been selling the rest.  I got so excited about all this stuff that I almost forgot to pick up a prescription!  Keith actually saw it all before I did and just automatically pulled the van over.  He used to ask if I wanted to check things out.  Now he just stops. 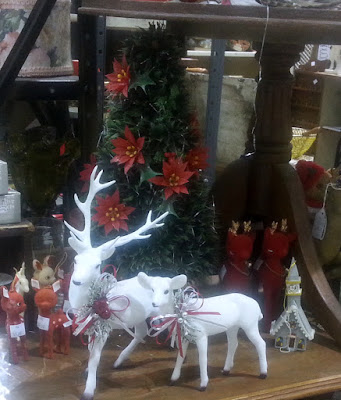 A little bit of my Christmas display.  I hit the vintage flocked reindeer jackpot this year.  Most of them came from one sale where a guy was selling things from his aunt's estate.  He said that she loved Christmas and had 8 trees in her house every year!  She must have used the same set up every year, because all the things I got from that sale were labelled as to where they were put for Christmas.  The white reindeer (love them!) went on the mantle, while all the red ones went on the TV.

I do not know why I'm sideways here, but I can't make myself stop doing it.  Maybe it's the Spider-Ed powers kicking in.  I just wanted to show how much my hair has grown out.  I plan to start rocking the most awesome ponytail you've ever seen soon.  I'm holding that brush because I was interrupted while doing my Rhianna lip sync routine performing my nightly brushing ritual. 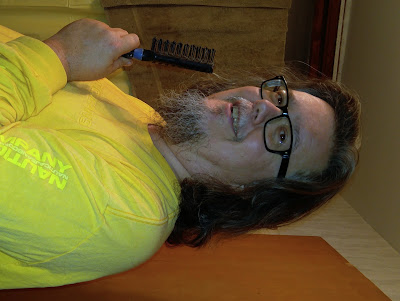 Every now and then, I have two cancer treatments in one month.  December was like that.  Lily came to visit during the first one.  She always come right to us and spends the longest time with us. 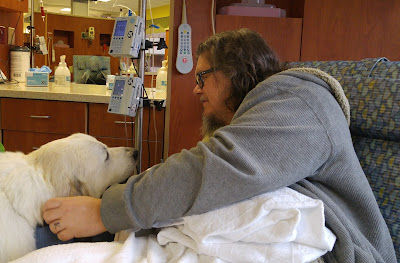 The second treatment was on December 27.  Since the center had been closed on the 26th, they had a huge amount of people to see that day.  Instead of going to the usual clinic floor for my infusion, I was sent to a kind of ad hoc treatment room they set up to accommodate the extra traffic.  It was cold and very noisy in there, but we got in and out faster than we ever had before.

If you follow me on Facebook you've seen this Christmas Eve pic, but it's one of the best selfies we've ever done, so here it is again. 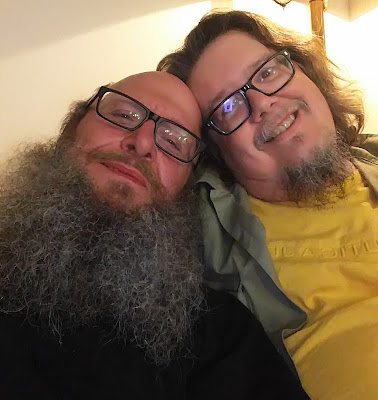 That is an awesome outdoor Nativity scene. Although I thought blow molds used to generally be made in the US, the colors on those figures look very much like my indoor Nativity, which has plaster of Paris pieces that were made in Germany 1940's or early 1950's, and were sold in dime stores here.

I like your new hair length, just promise me we are not gonna see you running around in a man-bun OK?

That is a wonderful selfie of you and Keith - Happy New Year to you both!

I love that selfie! Yes your hair is getting long!! Pony time! The blow mold nativity is really great looking. So a busy busy Dec. I'm enjoying the quiet time at home but wish this nasty cold would go away. It's back in my throat and I may lose my voice once again. Sigh... Sending you big Hugs without the germs attached.

Great selfie. The blow mold nativity is great - lightweight, quick to put away, amazing that it is still together. Hugs.
Joy

I vote for a man bun or a braid for that long hair. Keith needs to dread his beard. He looks like the rabbi that lives around the corner from us. Love the nativity. wish we had curb shopping here. They promised us snow but we only got the freezing temps.