Oh Lord, I’m going to ramble ‘til I get back to where I came

Going to try to actually get some stuff posted tonight. Otherwise, Roger might meme-tag me again.

Since we’re kind of in a lull between active periods, I figure I’d better post now while I can. We have a show tonight (Amy Ray), followed by an out of town show (Nanci Griffith) next Monday. When we get back from that, I’ll be housesitting for some friends for a week. As soon as I get back to our house, it’s CONFERENCE DAY, followed by the first Annual Mitchell Brothers’ Reunion Road Trip!

We decided on Nashville for the destination, so I get to be the tour guide. It’s IBMA awards and fanfest weekend, so there’s a good chance of catching some good shows, provided we can get a hotel room.

After I get back to town from that jaunt, I run headlong into my 41st birthday. Wow!

Everyone seems to be doing blog contests these days, so I’m going to try too! Tell me the name of the song the main title (the one up there in bigger letters than everything else) of this post comes from and identify the songwriter, and I’ll send you something off my desk! 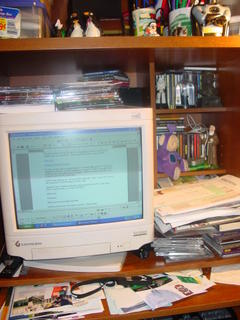 Seriously, I’m obviously needing to tidy, and I’m sure I can find something interesting in this mess to send someone, just don’t hold out any hope that it might be a CD.

Email your answers to me at memitch at att dot net no later than five p.m. (EST) Monday, October 17, 2005. First correct answer based on the date/time header on the email wins. In the case of a tie, I’ll rummage around and find something to send both winners! Be sure to include your name and address so I’ll know where to send your prize!

Oh yeah! There are a couple of extra hints (not that anyone needs them) hidden in this next little tidbit.

If I Needed You

Borrowed from the meme-addicted Roger, who got it from Lefty. The idea is to take an artist and answer the questions using the titles of their songs.

Are you male or female: Boy From Tupelo

Describe yourself: Here I Am

How do some people feel about you: Heaven Only Knows

How do you feel about yourself: Too Far Gone

Describe what you want to be: Michaelangelo

Describe how you live: Beneath Still Waters

Describe how you love: Easy From Now On

Share a few words of wisdom: Even Cowgirls Get the Blues

Johanna Draper Carlson posted some great reviews last week. Of course, she always does great reviews, but this time she hit on a motherlode of books I’m interested in reading, these two in particular. I always appreciate pointers to the good stuff.

Lefty gets excited about comics.

It’s been a rough week for cuddly characters. The Smurfs get bombed out. Wallace and Gromit get burned out. And the Teletubbies are strung out! (That’s so not right!) More positively, last week Augie discovered Asterix! (Thanks to Cognitive Dissonance and Comics Reporter for the Smurfs links. CR now has a link to the Smurf video now.)

Keith’s from Arkansas, too. Not too far from Fayetteville, I think. It looks like we chose the wrong time to visit his mother last month. Sigh!

Remember those “Question Authority” bumper stickers from the 80’s? Some times, that’s a really good idea.

Once again, I bow to the genius that is Postmodern Barney! God bless you, Dorian Wright!

Make way for the Incredible Pope-Man!

And from another side of the religious spectrum: Muslim heroes!

This is a BIG AD. (From Keith)

What God really said to Bush.

News story I’d really like to see. Thank God for the Onion!

If you watch all of Dwight Yoakam’s video, you’ll be casting a vote for it at CMT.

One of Mary Gauthier’s fans created this slideshow using her song Mercy Now and images from the aftermath of Hurricane Katrina. Gauthier is promoting it on her own website. There are a whole lot of people who could use a little mercy now.

Fun Kim Deitch animation. I have to admit it work better for you if you know something of the whole Waldo saga. Here’s a good book to bring you up to speed.

I found some of the above lurking on my clipboard, where it had been for god knows how long. I think some of them were acquired while my dad was ill, and I’ve since lost any attributions I may have had for sources. My apologies, but I thought they were too good not to use.

I finally cracked the 220 plateau. I’d been really discouraged lately with the weight loss, because I hadn’t been able to get below 220. This morning the scale said 216, which was a much-needed boost. I haven’t been noticing a lot of difference in the way my clothes fit lately, and this damn belly seems as huge as ever to me

Speaking of Lucinda Williams, she was a part of a back to back concert week recently. WFPK closed out the Waterfront Wednesday season with the Duhks and Hem. It was a perfect night, cool, but not too cool. Both acts were fantastic. The Duhks had some sound problems at first, but I loved their blend of traditional music, gospel songs, and country twangers!

The next night, we saw Lucinda Williams at the Brown. She’s got a rabid following that expects to hear certain things from her, so I was surprised that she did a half dozen brand new songs that night. She’s road testing some tunes in preparation for putting a new album together. It left less time for some things I wanted to hear her do, so several of them got left out of the set, but it was a rare treat to hear some works in progress out of this great songwriter.

A User’s Guide to They Might Be Giants: I really, really needed this one this week.

Let Freedom Sing: This Land Is Your Land Vol II: Stuff from the heyday of the 60’s folk boom, when everyone called it “protest music.” The perfect antidote to an overdose of the Bush Administration.

So you ARE alive. Emmylou- good choice for the meme. White Freight Liner Blues by Townes Van Zandt, performed (as I know it) by steve earle.