This is the month that nearly killed me.  I've got to find a way to stop totally stressing over the sales reports.  I'm learning a lot about how unpredictable the retail business is--way up one day and way down the next.  I'm also learning that, maybe, just maybe, one or two bad days don't really matter that much.  Or maybe not.  Quite possibly, I obsess over things just a bit too much.

I'm making some plans for this year that involve kicking myself as a reseller into a whole new level by the end of the year.  I think I can do it.  I'm pretty sure I can do it, in fact.  But, I have to have the booth on consistent, solid footing before that can happen.  And, I just don't feel confident that it's there yet.  We're passing out of tax season, which is a boom time for re-sellers, into the summer, which is a slow time of the year for us.  There's too much competition from yard sales and such, plus vacations and nice weather and who wants to be cooped up in an old flea market when you can go to the lake?  This is the test time to see if I really can maintain the ground I've gained.

The good news about March is that it ended up being my best month EVER.  I set a new sales record and am thisclose to hitting four digit gross sales.  I'm getting a good balance of price points in and out these days, and that surely helps a lot.

But it wasn't without its struggles.  I'm going to break my own rules here and actually use some specific numbers for specific days.  It seems on the one hand kind of crass to do so, and on the other kind of un-business-like, but I can't tell the story without it.  And it's a story that I think is worth telling.  I go back and forth a lot on these booth posts all the time, anyway.  I'm never sure if I'm giving away business secrets that shouldn't be told.  For that matter, I'm never sure if there are secrets in this business.  So, if I'm makingan error, so be it.

Last weekend of the month was simply killer.  Saturday sales were 85 dollars and Sunday's were over 100.  Awesome!  I was going into the last week of the month knocking the door of 900 dollars in gross sales.  To say I was psyched was an understatement.  Then came Monday.  Now, I know Monday is a slow day and sales always drop on Monday but to $2.34????  So much for 900.  And then Tuesday was only $1.58!  I nearly had to be scraped off the floor after that.  With only two days left in the month, 900 was looking a bit doubtful.  I was honestly expecting .99 for Wednesday and .50 for Thursday.  Clearly, I had offended the re-selling gods with my hubris or something.

Fortunately, it dod bounce back for Wed and Thuirs and I did break 900, which was a great relief.  Man, there ain't nothing like the highs and lows in this business, let me tell you.

So, anyway, here's the charts: 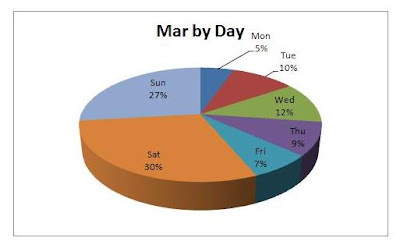 Look at how low Fridays are!  Just as slow as Mondays for the whole month.  That really caught me off-guard.  Hasn't happened before.