It's probably one of those "eye of the beholder" things, but the killer Halloween display is done.  It's not quite as snazzy as last year's, which actually told a little story, but it will most certainly do.  I had a lot more to work with this year.  Last year, I had three totes full of stuff and sold nearly everything.  I had a little less than a half tub left at the end of October.  This year, I brought in four tubs.  I hope it sells as well this time around.

My table covering would not cover all three of my card tables, so I ended up using the one from last year to cover one of them.  I could have just reused it, as it did cover everything, but I hate repeating myself.  I may yet get some cobwebby stuff to cover the shelf with, just for added effect.  I guess with all the holiday madness coming that those card tables are committed to displays until the end of the year.

Enough babbling from me.  Take a look and see.  I'll warn you that displays really aren't my strong point.  I have absolutely no discernible talent for arranging things.  I'm much more of a "plop it down, stack it up, and cram it in" kind of guy.  Sometimes, I end up regretting my choices.  I already know, for example, that the tub of costumes is over full and will give me no end of grief.  Still didn't stop me from doing it, though. 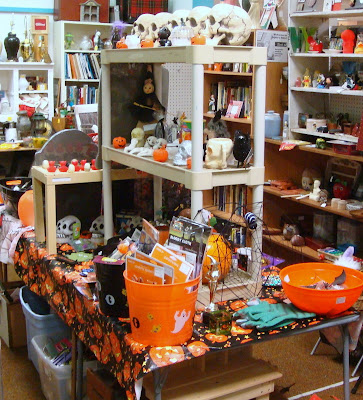 I wish it was possible to get a good pic of part of my booth without the mess in all the other parts showing up as well, not too mention all the other booths around me. 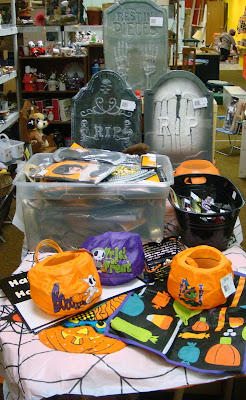 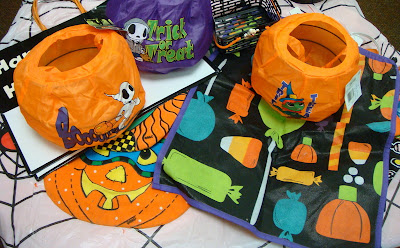 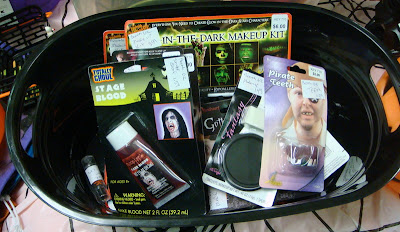 It's a tub of make-up!  Halloween Monster Power, MAKE-UP! 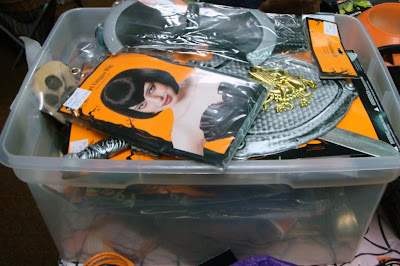 I know I'm going to regret that.  I just know it.

I like skulls.  If I were thirty years younger, I would probably be goth.  Thank god, I'm not thirty years younger.  Black lipstick is not a good look for me.   For some reason, all those skulls lined up like that makes me want to sing this song.  I am not a well person. 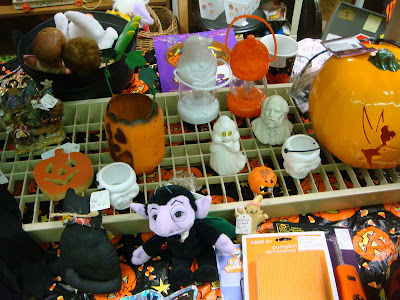 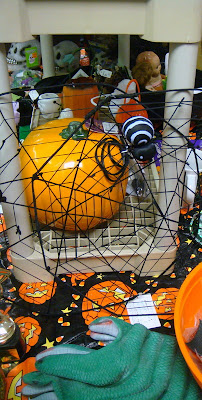 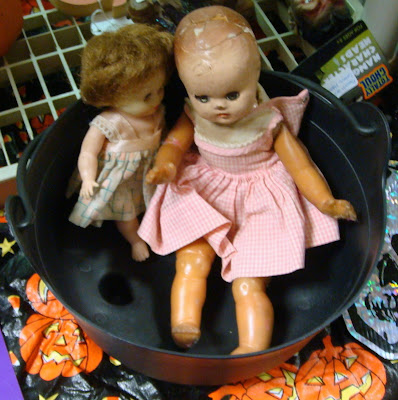 BEWARE THE DEMON DOLLS!  I have a few more creepy dolls to add to that cauldron.  Brrr...dolls.  Hate 'em.

Better the Demon Dolls than the DEVIL DUCKS!  FLEE!  RUN AWAY!

I agree. You'd be a homely goth.

I just looked up favorite holidays and Halloween is 3rd after Christmas and Thanksgiving. So it's no wonder people buy the stuff.

Your display looks good - I'm sure you will sell, sell, sell!