Playing Nice with Others

I'm working on a post about thrifting for resale, but it's taking longer than I thought to finish.  Hopefully, I'll have it done next week.  In the meantime, here's a real life example of some of the things I'll be saying in that post.

I stopped by my favorite thrift a little while ago when I was making my rounds.  I was barely in thee door when the cashier told me about something on the shelves with the picture frames that I might be interested in. 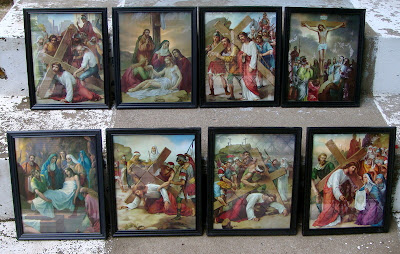 It's not a complete set, but that's all there were of these framed Stations of the Cross.  With religious pictures you have to be careful, particularly if they are in frames.  Sometimes, what you have is simply a modern holy card in a Wal-Mart frame, which isn't going to get you anywhere if you try to resell it.  The ideal is, of course, an older piece in an older frame, but life isn't always ideal.  Sometimes you get what I got here:  older pictures in newer frames.  Not a fabulous find, but not a terrible one either.  I'm going to pop these out of the frames and sell the set together and then sell the frames on their own.  You gotta do what works.

The important part of this particular story is not the find, but what led up to it.  Store staff told me about it!  That means three things:

Take it all together and that means that I've obviously built some kind of relationship with them.  We're not BFF's or anything, but the few seconds that I've taken to make small talk when I get checked out, the little conversations we've had about things I've bought, and the patience and politeness I show when I'm in the store have paid off in ways that can only benefit me.

As a reseller, I go to the thrifts as part of the hunt for merch.  I don't have to make the effort to relate with the staff or be nice to people, but I do it anyway.  A lot of resellers don't, which is why we have such a poor name in some circles.   When you do, though, it produces dividends.  I like knowing someone is taking notice of stuff and thinking of it when they see me.  Every little bit helps.