Oh dear!  I missed Monday!  I had the day off and spent it with my uncle and then at the booth, getting Xmas stuff up.  I'll have some pics of the finished product in a few days, when it's all done.  In the meantime, enjoy some rambling.

I got on the bus the other day and the driver said his fare box was broken, so no one had to pay.  I use monthly passes, so it's not that big of a deal to me.  The woman behind me had cash and the following ensued:

We're out looking for Halloween clearance items during my birthday shopathon.  Keith is waiting in the car, and I am wheeling a cart out from the store when I see them:  Vultures!  Waiting for a parking spot!  Our parking spot!  One woman is holding up a couple other cars in order to swoop into our spot when we vacate it.

I unload my cart and then take my cart to the cart corral.  And she HONKS HER HORN AT ME!  Apparently, I am not moving fast enough to suit her.  My response is to slow down.  I don't mind people waiting for a spot and the lot is pretty full.  But honking at me is behavior I don't tolerate.

I get back to the car, walk over to the driver's side and say to Keith:  "We need to have a pretend conversation because that woman (I might have used another word here) honked her horn at me."  He looks and me and says:  "Really?  I think I need to look at something in the back."  He gets out of the car and we go to the back and he grabs something out of a bag and we pretend to examine it.

By now, she's got a line of four or five cars stretching out behind her and they are honking at her.  She roars off, the line breaks up, we get in the car and leave.

I'm in one of the other Peddlers Malls as part of my birthday shopping extravaganza.  It's the day after Halloween and they are playing Christmas music and I am totally hating it.  Totally!  I mean, it's barely November, people!  As I'm shopping, I start hearing other people complaining about it.  Over and over.  Eventually, they start getting on my nerves more than the music is.  At that point, I decide that maybe I like the music after all.

I had a wonderful birthday, as you can see here.  This is me in the process of turning 49.  I think that's my "I'm turning 49" face. (Although it might be my "I really need a haircut" face.  They're kind of similar.) 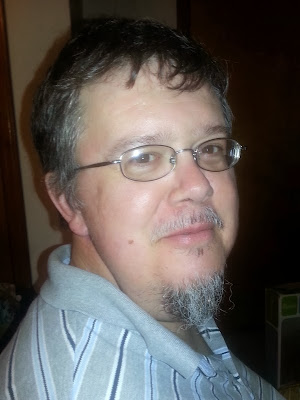 We went to dinner at my favorite restaurant.  The food was fabulous!  We only go there a few times a year, so it stays really special for us.  It's the "go to" place for happy celebrations!  Guess who my birthday present was?  Yes, I did say "who." 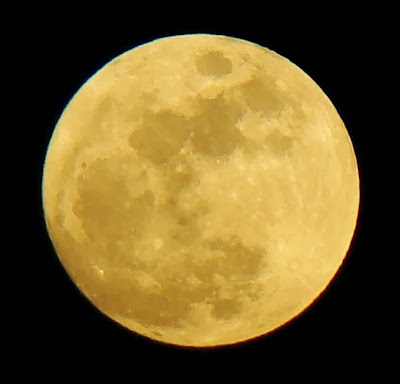 Get it?  Here's another hint: They're gonna be here in February and guess who got tickets as a birthday gift?  (No hints this time.)  I'm over the moon, whatever color it is!  According to folks on the Emmylou mailing list I belong to, it's a fabulous show.

Speaking of birthdays,the extravaganza shopping was not quite all it was cracked up to be.  I found a few things here and there, but not much.  Perhaps my best two purchases were this vintage Santa blow mold:


I did get some other stuff, but nothing blog-worthy.

The Halloween clearance hunt was a little rougher than usual this year, for some reason.  Most of the Walgreens did like two days at 50% off, then shipped it all off.  Every other place kept their stuff at 50% forever before dropping it to 75% off.  There's no profit margin at 50% when you consider that you're going to have to sell it for a little less than the stores will have their stuff at next year.  You can do that and make a healthy profit, especially in bulk, but you have to get it cheaply.  That means at least 75% off.

I saw a few too many booths during the birthday shopping that not only didn't really have a handle on this concept, but they were trying to sell their Halloween stuff at more than the regular retail stores were!  They also had tons of stuff left over.  All I had was this: 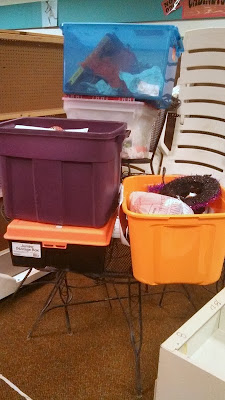 It actually looks like more than it is.  None of those tubs are completely full, due to the odd size of some of my leftovers.  I had over 80% sell through, which is really good.  Not to worry for next year, I finally did hit a well-stocked Target with tons of 75% off stuff:


Now I just have to price and store it all.  A junker's work is never, ever done!

Speaking of junker's work, here's a preview of the Christmas set up at the booth:


In other booth news, the end table Albatro$$ sold!  And I didn't lose money on it, as it was marked down to my cost.  I was so excited, I did the Happy Dance at the booth.  And then I put the Deliverance Desk in its old spot.

Lastly, there's been a new development in the phone saga.  I think it's trying to return the kindness shown to it during its time of need.


I've kind of got a lot to do right now, with the holiday transition and Thanksgiving prep and all, but I should still keep blogging.  Look for the return of the vintage Christmas cards right after Thanksgiving.  I've got a ton of them, so I'll probably so several each day.  I've got some scanning to get to!
Posted by EM at 11/14/2013 05:00:00 AM

Santa's Hot Pants - now that's a new one! Glad you had a happy birthday week. It seems very productive!

I HATE it when lurkers wait for my parking lot. I have to load it into the car, then take my cart back, get in the car, buckle up find, my keys, make sure everyone else is buckled, then back out after looking for cars or pedestrians. This is not going to be a quick process, for heavens sake. God forbid I want to check my messages or send a text. HONK. HONK. Love it that you got her goat. :)