This will be a short one, as I'm running way late this morning.  I got really sick last night with what I think was food poisoning and Keith thinks was just a bad upset stomach.  I've never had an upset tummy that made me sweat profusely and feel like I was passing out before.  Worst nausea since chemo.

I seem to be better now.  I slept a little later than normal, but I'm going to head into work.  Not the best start to a week,

In fact, it's more like the continuation of last week, which was a pretty sucky week all together.  It was kind of just one minor irritation piled on top of another all week long, each one complicating the last one, over and over.  And in the midst of it all was a large, major complication that forced me to make some decisions I did not want to make at all.  I can't really talk about any of it yet, but I anticipate that there will be a long post about some of it in the future, because there is a MAJOR change looming, one that I am not the least bit happy about right now.

The only real bright spot was my sales for the week, which stayed consistently high.  Very high, in fact.  I've already made rent, in a record nine days.  Woo hoo!  Now, even if school and the fair both starting on Wednesday do deliver a blow to my sales, it won't be crushing.  Unless it's goose egg city from here to the 31st, I'll be okay this month.

Even the yard sales were dreary on Saturday.  It rained on and off all day, so we went to two indoor sales and a porch sale.  The Mazda shot almost isn't worth showing. 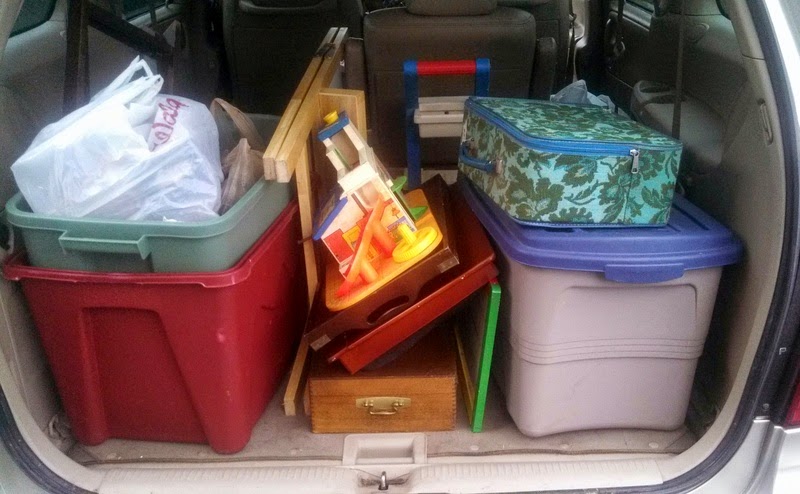 Don't be fooled by that big tub on the right.  It's totally empty!

Sorry you had a sucky week. Plus stomach issues - that is NO FUN! Hope this week is better.

That flowery case is an Avon Sales Sample case from the 1960's - in case you didn't know. In CASE - GET IT? hahahahaha Have a good day!

Feel better and hope this week has things looking up!

Just know I'm thinking of you! Hope the week gets better.
hugs,
Linda

Find some cheap pleasure - I dunno, pick wildflowers or get a massage or take a bath if you usually take showers

Aw Eddie. Hate to hear that you've had a suck week. Here's hoping things get better for you. Keeping you in my thoughts.