I felt like I was channeling a bunch of other junkers on Saturday.  See if you can guess who based on some of the junk. 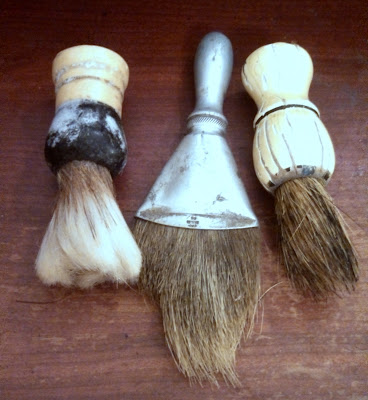 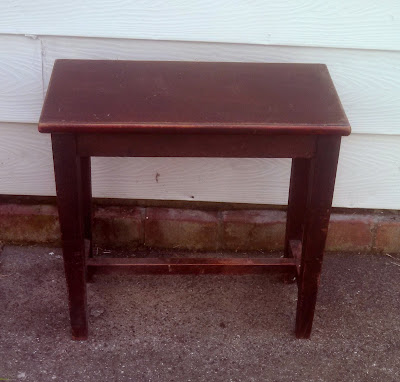 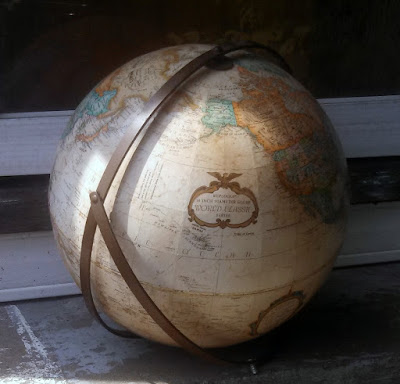 Keith kept carrying it around and singing this.  I've been walking through the house with it on my shoulder and playing Atlas. 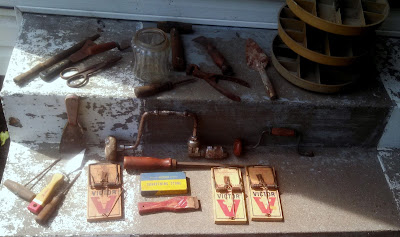 A bunch of tools (and rat traps).  I have no idea why I got the rat traps, but they just seemed kind of cool.  If you're not a rat, I guess.  I really don't know enough about tools to be buying them, but this was a bag deal, so we'll see how it goes. 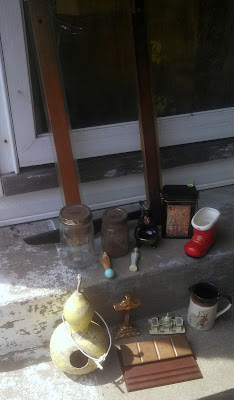 T-squares have long been a favorite of mine, plus a few smalls. 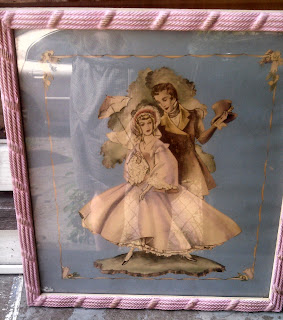 A lovely antique picture.  Please to ignore unfortunate reflection of someone with fat legs in the glass.  Fat legs in ugly shorts yet. 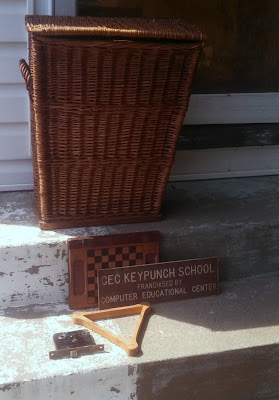 Wicker hamper from the 1920's, plus a few other bits and bobs from a nice house.  Louisville is home to several public parks designed by Frederick Law Olmsted.  He also designed the roads leading into the parks as wide ambling parkways lined with fairly well to do houses for the day.  I got much of the history of the house when I bought these items.  They're having another sale this week.  I think I'm going back. 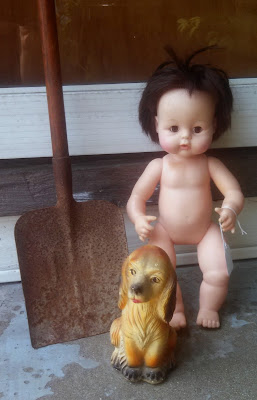 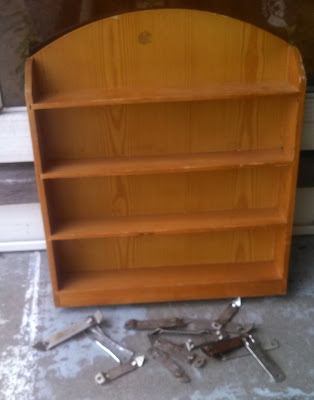 I'm going to try and work this shelf into my barware display.  It's the perfect size for shot glasses.  Also, vintage can and bottle openers, most from local breweries that are now defunct. 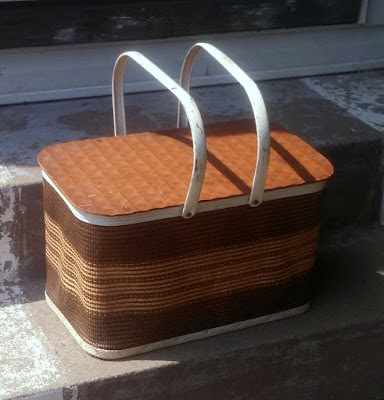 Picnic basket.  It's not in the best shape, but the price was right.  I told Keith that this was the 8th picnic basket I've found this year. Most of them have sold, so I'm calling this the "Picnic Basket Summer."

Of course, as much as I might "channel" or betray an influence of other junkers, I'm still always me. Case in point... 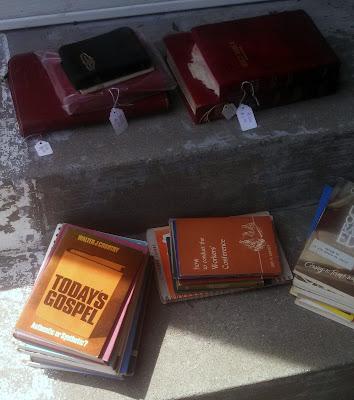 Bibles and religious books and booklets.  One of the workers at the estate sale recognized me and asked if I was the "guy that likes the religious stuff."  Why, yes.  Yes, I am.


Who else would by an antique picture (above) and a basket of action figures at the same sale?  What can I say?  I gotta be me! 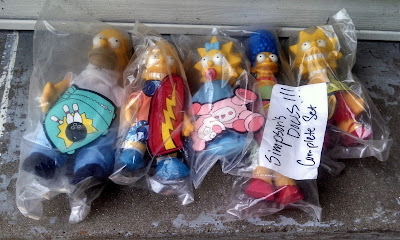 These Simpsons dolls were part of one of the most interesting negotiations I've done in a while.  The guy told me his price, which was a good one that I was totally willing to pay.  However, he had also said he was open to offers on most stuff, so I had to try.  I offered five bucks less.  He said no.  I upped my offer by two bucks.  He said no.

Then, he told me that his price was one half what they were getting on eBay, so he felt that was fair.  Now, my own personal rule is that as soon as a person quotes eBay prices, I am automatically going to assume that the person does not know how to properly look things up on eBay.  I'm not going to say anything to them about it, but so many people do not know how to use eBay properly to research that it's actually a safe assumption to make.

Even if he did actually find completed, sold listings to make his price, there's still a high likelihood that he either:  A) Automatically picked the highest price he saw without noting whether that was an aberration or not B) Did not compare his item to the one he found to see if there was anything special about the listed one that might have contributed to the price or C) Totally ignored all the times items like his were listed but did not sell.

Still, his first price was a fair one, and my plan was to pay it if all else failed.  First, I decided to look at some other items, then raise my offer one more dollar, which would be close enough to his, but enough lower that we would both be happy.  If he said no, then I would fork over the whole price.  I did want them.  I just love the game sometimes.

As it turned out, something else caught my eye. 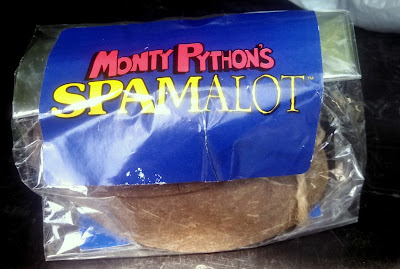 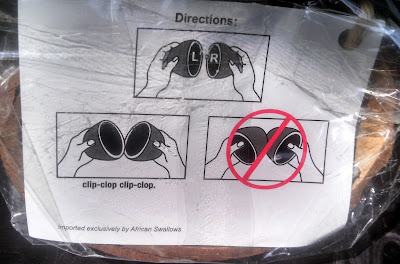 If you've ever seen Monty Python and the Holy Grail, you know what these are.  If not, here's an explanation.


My favorite part of these was the tiny print.

Still playing the game, I offered him a dollar off his price for them.  I figured he would go for it and I would go ahead and fork over the money for the Simpsons.  Instead, he said "I'll let you have that and the Simpsons" for the original Simpsons price.  DEAL!

He was a good sport about it all and we talked about stuff for a little while after the deal was made.  I thought it was a well-played game. 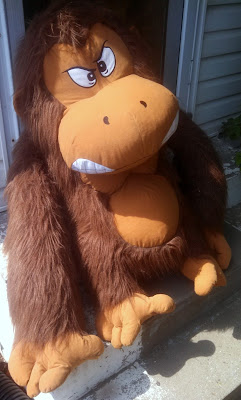 Told you he was HUGE!  Like I'm really going to pass him up.

I apologize for the dodgy quality of some of the pics.  It wasn't the right time of day to take pics in front of the house.  The light is better in back, but we have an awful mosquito problem back there right now, so pics back there are out for the moment.

I came in to cool off before finishing my paint projects for today and saw your post come clopping by as if you had been carried in by African swallows though we do know they are not migratory birds. Perhaps the gorilla helped. Love the antique print, the hamper, and the bench.

Oh oh oh. Great great stuff. I love every little bit. It will slide right into your spaces so nicely. Well worth going out. The gorilla is so ..... huge and so eye catching. He is going to bring in lots of lookers into your space. Is it going into your toy space? Comic book area? Rat traps, mouse traps - where to display and how high up from little fingers.

Well, let's see.... shaving brushes would be our yardsalequeen. Picnic basket would be our very own Monkeybox. Not sure about the rest. You got some great finds - don't blame you for going saling. How can you not! The keypunch sign brought back some memories. I was a key punch operator in the late 1960s. My first job out of high school. Boy that takes me WAY back!!!! Definitely the precursor to computers.

One of the greatest quotable movies ever! Love the coconut. :-)

Great stuff!!! I got the picnic basket as a Shara influence! Not sure about any other 'influences'...LOL! Me, I love the antique picture (legs and all) with the pink frame! Love the Gorilla...yes you HAD too!

You are you, unique !!! If it's a picnic basket or action figure, as long as you know it'll sell, buy it. Donna would be slapping paint on the table and putting it in her booth at Riverfront Antique Mall !! Hug's , TT