The rest of the curb finds

I had to wait for the rain to stop this week to get these pics.  It's still pretty overcast, so they're not great pics.  Also, most of this stuff needs at least a little cleaning.  Even still, I think there's at least one thing that you're gonna like. 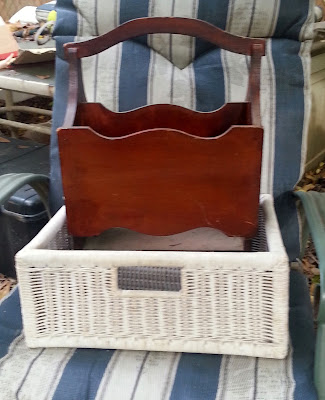 More stuff from the place at the bottom of the hill where I found the weight bench.  I think I found something new there every day I went out. 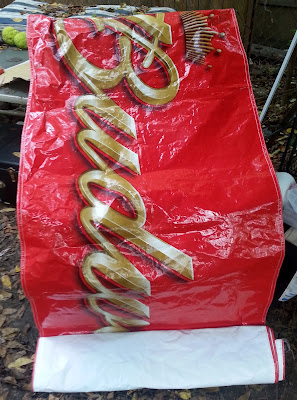 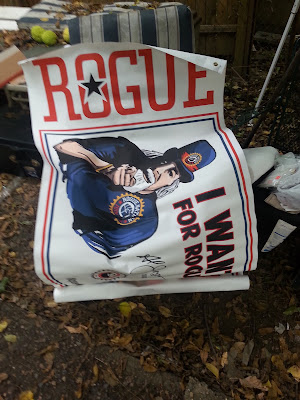 I know I'm going to regret those two beer banners right up until they sell.  I can already hear myself cussing because they keep getting left unrolled all over the booth.  Still, I had to grab them. 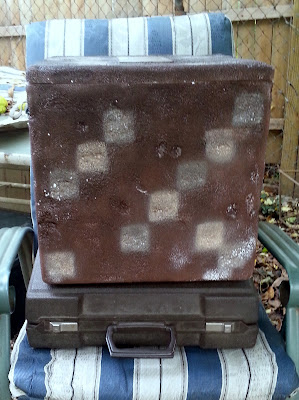 Oddball stuff is my forte.  The brown thing is a Styrofoam storage box that has been painted.  The case is for an old Smith-Corona typewriter. 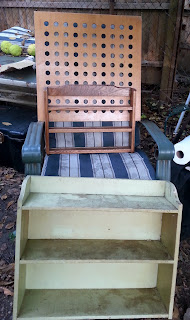 This green shelf is my favorite find of the set out.  Just awesome.  I love small racks like this really nice one.  I use them to expand the display capacity of my large shelves.  My book booth has a built in pegboard wall.  I also hang them there and use them to display action figures and other nerd toys.  I have no earthly idea what that board with the holes is for, but it's cool.  Eddie stuff. 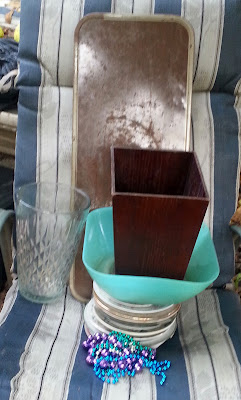 There are always little bits of odds and ends, like these plates and beads.  The jadeite colored plastic bowl will look cool at the booth with Christmas ornaments in it, I think.  The brown thing in the back is a vintage bed tray from a nursing home that's now defunct. 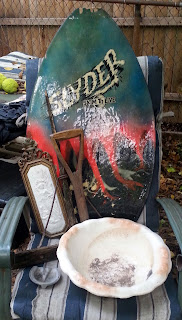 I found a skimmer board like this at the last junk set out and it sold quickly.  Maybe this one will too.  It's a little battered, but the other one was too.  I'm thinking it's a cool decor piece.  Large bowl from the place down the hill.  Such eclectic stuff there. The little gray thing is a vintage metal ashtray shaped like a horse shoe.  That's a popular motif here. Finally, the end of an old cement smoother and a wood shovel handle.  Why not? 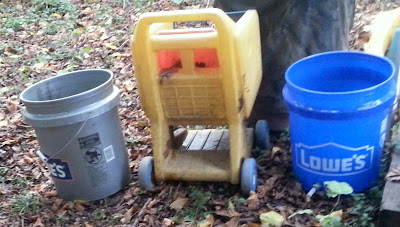 I grabbed the Lowe's buckets for display purposes.  I need them for tools and implements.  Someone added a spout to one of the buckets.  Don't ask me why. 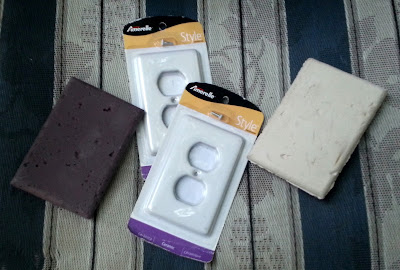 These strange pottery things were a mystery until I found the switch plates with them.  Someone was trying to make some custom switch plates and plug faces out of clay.  I'm not sure it's the best medium for such a project, since the pressure from the screws that hold them to the wall would surely crack them.  That may be why the project was abandoned.  There were a lot of them in various stages of completion.   I think someone might want them for some other kind of project. 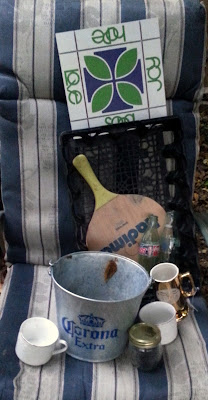 More odds and ends:  Gold-rimmed tea cups (Several of these), Corona bucket (quick sell), Small canning jar (Can't have too many of these).  The black thing is a plastic Coke crate.  I also found a stash of "collectible" Coke bottles from the 90's and 00's.  They have either NASCAR or UK logos on them.  More popular local themes. 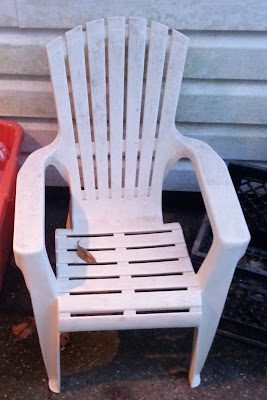 Finally, a child-sized Adirondack chair.  I made a "no chairs" rule before I started out, because I have so many right now.  Kid chairs were the exception to that, since I do sell them frequently. I left the adult chairs that were at the same spot for someone else.

All in all, not a bad time out in the trenches.  I mean, on the curbs.  Thanks for taking the journey with me.

That styrofoam box looks like something from my kid's Minecraft game.

I mean... you definitely can't pass up free stuff... especially if you're making money on it! I think the green shelf is my favorite thing you found on the curb!

Heck, I'd be out there in the trenches in a blink of an eye. I love the green shelf and the bowl sitting in front of the Skimmer board . Oh ha, I'll take that Corona bucket w/a 6 pack and some lime's !!!!! That actually sounds good :)) Mexican for your bday dinner tmmrw ?? Hope all went well today :) Hug's , TT

We used to have a clean up like this- so much good stuff sitting there. You did good!