Believe it or not, I've managed to cross quite a few things of my pre-Thanksgiving list.  I'm not going to get it all done, of course.  I've already abandoned hope for most of the larger stuff, except for the booth.

I loaded up Mazda today with a huge mound of stuff from Sorrow Mountain, along with some comics and stuff from the house and headed across the river to the Peddlers Mall. 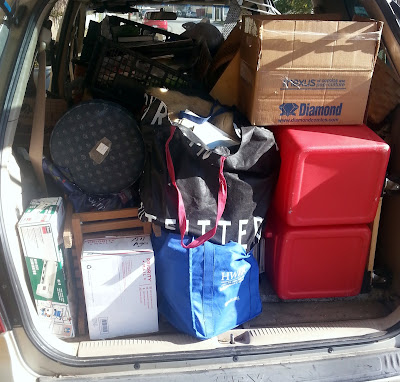 That's one of the biggest loads I've ever crammed in there.  No time this week to do a reveal shot later on, but you can imagine all the junkie goodness therein.  I am making some serious progress on Sorrow Mountain.

After the first of the year, I am going on a total buying moratorium until yard sale season 2016 starts.  I'm going to spend the first part of next year burrowing deep into that mountain.

Oh yeah.  I made some great comics scores at the Cavalcade of Comics.  I'll have much more on this later, but here's a pic. 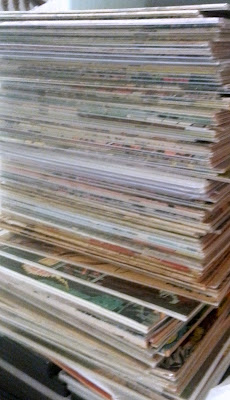 You win on the 'most stuff that can be crammed into a Mazda". Looks like the comic find was GREAT.

WOW! That is a load of stuff! Glad you are making a dent in sorrow mountain. I'm dragging out my Christmas stuff and going through it this week. I've got to downsize! Enjoy your Thanksgiving.
hugs,
Linda

Whoa! A boatload of stuff in the Mazda! Looks like you outdid yourself with the comics, too.Happy thanksgiving to you and Keith.