The Rest of the Bounty!

I think I said all 1,000 words for these pictures in my intro to the first post, so let's dive right in! 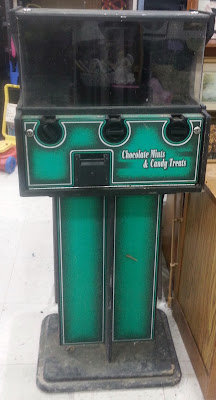 Yes, I found a vending machine.  Awesome, isn't it?  At least I thought so.  Since I don't have keys for it, I can't charge as much for it as I might want, but it's the kind of thing that attracts people into the booth to check it out, which is never a bad thing.  That alone made it worth picking up.

I was kind of surprised it was still there, since it was one of the things I had to come back for later.  As I was leaving that street, I saw a scrapper driving through, so I was prepared for it not to be there.  I was coming back for some other stuff anyway, so it was super to find it still there.

This was one of those finds that I really wasn't sure how Keith would react.  I've talked before about the eyerolls I get some times.  I figured a vending machine would earn me another one, but when we pulled up he said:  "A candy machine!  You have to get that!"  It's nice to know after all these years that I can still be surprised. 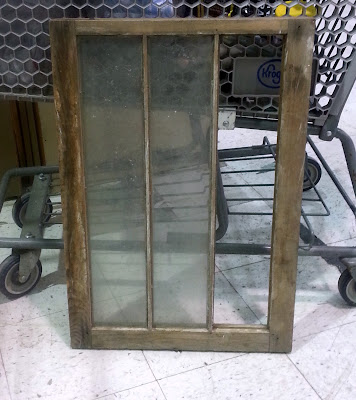 This window is missing one pane, but it's still cool.  It came from behind a vintage store where I used to have a booth.  That's another spot that's always worth checking out.  Last set out I got a little miffed, because it seemed like they had smashed everything big up before they put it out.  Not so this time, so maybe it was wandering hooligans last time.  Some people just don't appreciate good junk.

I like to go for windows that have something unique about them, like the three panes on this one.  Lots of booths in our mall have windows now, and I try to look for ones that will stand out from the crowd, because of their size or hardware or glass or something. 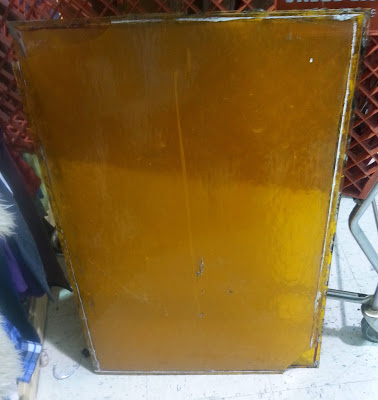 These orange Plexiglas panels are unique enough to catch my eye.  I ended up knocking the corners off the one when I tried to pull it out of the pile.  I decided to keep it anyway. 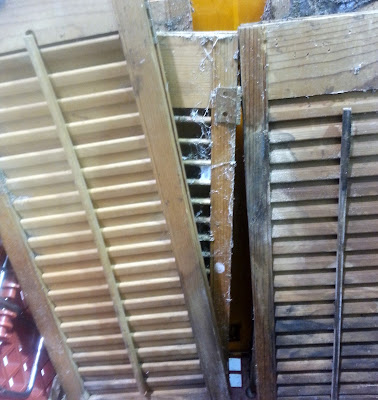 Mini-shutters are always a go.  These need much deep cleaning, but they were still worth getting.  They are stashed in the shed, along with a handful of other items, waiting for a nice, warm backyard day when I can tackle them. 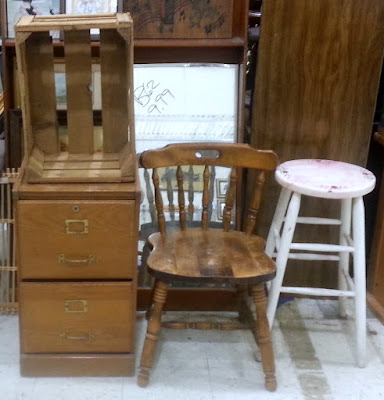 Wood chair.  Wood crate.  Wood file cabinet.  Wood stool with ugly-ass paint job.  Seriously, that's like the worst version of those 80's country apples that I've ever seen.  Whoever did it didn't seal the paint job very well either, because it ran all over the place.  It'll be a nice re-do job for someone else.  Both the drawers were off the runners, but they slid right back on.  I actually did that before I put it in Mazda, just in case they wouldn't work right. 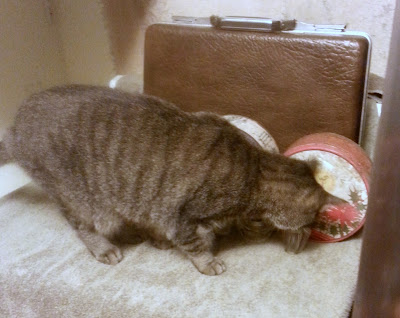 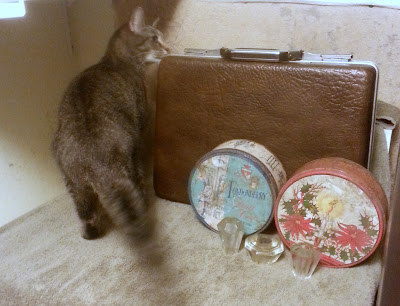 I think Chiquito had as much fun this time around as I did.  He really got into giving everything a good once over sniffing when I got it in the house.  I don't recall him ever getting that into the stuff I drag in before.

Maybe next time, I'll take him out with me.  He's a bit put out with me, since I haven't been home much during this set out.  I'll have to make it up to him.

Back to cleaning and pricing!

PS  I would be a little remiss if I didn't mention one more oddball find.  Since this is a PG-13/R-rated blog, there's no pic, but I have to share anyway.  Think of a part of the male anatomy that rhymes with "Venus."  Now picture little plastic molds in that shape of said body part.  A half dozen of them.  I have no idea what they're for, but I did find them in a box in one junk pile.  You just never know what will turn up.  Yes, I took them.  No, I have no idea what to do with them.

Maybe I'll start an "adult novelties" section in my booth.

Actually, I'm leaning more towards putting colored lights in them and using them for Christmas tree decorations. (There's a really bad pun I could make here, but I'll refrain.)  I think it would work.  They already look kind of like little, obscene ice sculptures.

Eddie, I think your finds are pretty great and Free! Love the vending machine and the 'venus' molds would have cracked me up big time. Oh yes colored lights.. I'm a perve what can I say. Loved seeing pics of Chiquito! I'm soaking in all my friends cats right now, missing Charlie so much. Hugs and happy Valentine's Day.

Eddie you find great junk and quite often with a lot of humor involved. Happy Valentine's Day to you all.
Joy

Venus Schmenus. The candy machine is a great find - it would be fun full of marbles and dice or something else fun. The Bean collects Superballs - I want to find him one of those big round machines like there are in at the store.

Could the Members Only molds be for candy or cake. Maybe lollipops? Love the window - I picked up 18 of them the other day. Thanks for the Chiquito pics - Miss Peepers has been missing for over a week and we are missing her terribly.

I was thinking your "oddball" find would make great chocolate candies, just added melted chocolate, let dry, and you've got yourself a great gift! Valentines day, birthday, the sky's the limit! HA! Hey maybe you could stock your new candy machine with them, brilliant!

So. Much. Great. Junk!!! As for the your last unpictured item and your phrasing bringing oddballs to your blog... I once put 3 Xs up on in my booth out of old marquee letters, since I had so many Xs. I also spelled out the word BUS. And I can't tell you how many people google "triple x bus" and come to my blog. Talk about weirdos!

Great finds, Eddie. The Venus items might do well on Ebay.... probably candy molds as others have mentioned. Could be used for bachelorette party favors!