Best music-related promo of the summer: 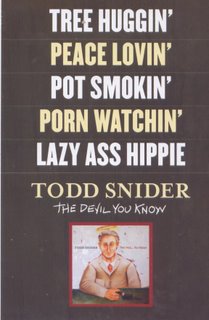 It’s for Todd Snider’s (Warning: Pop-ups and Flash at the link) new album, The Devil You Know, but interestingly the phrases are all from a song ("Conservative Christian Straight White American Males") on his previous release, East Nashville Skyline. Not sure why they're reusing them, but it makes a cool giveaway.

The whole thing is a sticker set! Each phrase is a separate decal, which you can peel off and use to decorate notebooks, bulletin boards, walls, refrigerators, or a nearby Keith.* 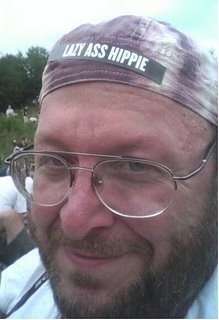 *You’ll have to get your own Keith, however. This one’s mine.
-----------------------
If you’re not already an InRadio supporter, then this month’s issue might just be what you need to join the flock. I love getting these bi-monthly collections of music from independent artists and labels, but this month they surpassed themselves. From start to finish, there’s not a bad track on this disc, which is amazing, considering it covers a lot of musical territory: pop, indie rock, neo-folk, Americana. It’s really great!

I’ve been cataloguing all of our CD’s into a spreadsheet, because it’s getting harder to keep up with them. I’m finding myself in a used music store staring at a disc and trying to remember if we’ve got it or not just a little too often. I’m only about ¾ of the way through and I’ve already got a thousand discs listed. Is that excessive?

Query: Been listening to What’s New, Linda Ronstadt’s first collaboration with Nelson Riddle from 1983. Eventually, they ended up doing several albums of standards together. Was she the first singer from a “more contemporary” genre not known for singing standards to record an album of standards? I know she’s gotten a lot of concert mileage of those albums. I think some folks probably know her more as a singer of standards than as a rock or country performer.

Nowadays, it’s become almost a cliché for artists to do these type of albums. Elton John actually mocked the trend in a Rolling Stone interview that I can't seem to find a link to. (Of course, given some of the mediocre pop he churned out in the 80’s and 90’s, he doesn’t have a lot of room to talk.) Did Linda start the whole movement? If so, then why did it take a couple of decades for anyone else to catch on?

I never heard anyone else not generally associated with standards doing standards before Linda, and she was roundly criticized before the fact, if memory serves; it was SO uncool.

Well I think I need to do the same...and Roger should as well, because well I want to see both of yours (and that Gordon guy too!) lists. Are these only "officially released" materials? Or are you also counting boots?

Thanks, Roger. I appreciate that. I feel better now and will show this to Keith. the 1,000 is our combined total, but the bulk of them are mine.

Chris, I'm listing what we own period. I've only got a couple of boots, but they're included, as are the growing number of discs I'm getting from doing Mixed Bags. I'll be glad to send you the sheet when I'm done, if you really do want a copy.