Well, it was an interesting day yesterday. Too many people there for me to take many pictures, but I did make a couple of my cart. I've always been a little shy when it comes to taking pics of things people have for sale, but there were some interesting items on display throughout.

As much as I love the flea market, I hate the crowds! I hate crowds in general, but here they make it so hard to take your time and browse. I passed some stands up just because I didn't want to fight to get over to them. That meant no food or coffee samples. Bummer!

The fairgrounds has raised parking to eight bucks, which is simply outrageous. While it didn't seem to hurt the crowds on this holiday weekend, I wonder how it will affect things during one of the non-holiday flea markets. That's an awful lot to pay for the privilege of parking your vehicle. Keith dropped me off at the front gate and picked me up there afterward, so we didn't have to pay.

Saw a lot more comic books than usual. In fact last time I was there, I only saw one or two dealers with them. This time they were everywhere! I even bought a few.

A lot of the same dealers are there from show to show, usually set up in the same spots. I like this, since it makes them easy to find. The people I get my bags and supplies from are one of the regulars. Just turn left when you go in and they're at the end of the first row. I can get that bit of business out of the way in the beginning.

There's another regular guy who usually has good stuff and his prices are pretty good, but he can be such an ass. A woman was asking about one of his items and he said to her: "You must be from Louisville. Only Louisville girls let their tits hang out like that." Sorry, dude. No money from me after that!

A whole lot of folks were going the "everything's a dollar" route in their booths, including the antique dealers. I got a lot of stuff that I never would have been able to in better economic times, including an old Easy Bake Oven, complete with pans and instructions.

Of course, there were still quite a few dealers with fancy things at fancy prices. I heard a couple of them talking at one point. Apparently, it was a good show for them too.

There seemed to be fewer of the people selling overstock groceries, cleaning supplies, and HBA stuff out of banana boxes. That's actually a good thing. A couple of years ago, they were about to overrun the place.

A couple of my favorite book dealers seem to have disappeared. I hope they just dropped Louisville from their circuit and didn't go out of business altogether.

Every time I go to a flea market and listen to the traveling dealers talk, it strikes me just how hard it must be to make a living that way

It's always a good place to do a little research about stuff. Six or eight months ago, I bought a small green glass cradle at a thrift and sold it in the booth. Never could figure out what it was for. Found out yesterday that it's a planter.

Also checked out a Holly Hobby toy oven like one I'm watching in a thrift right now. It's priced about half of the one I saw yesterday. So, now I just gotta wait a few days until the new half price tags go out and I can pick it up at a real bargain price!

And, finally, here's a couple of shots of my cart at the end of the day: 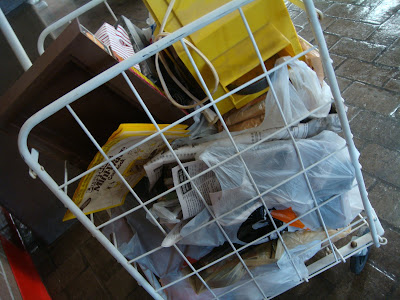 The yellow thing is the Easy Bake Oven. And, now, a side view: 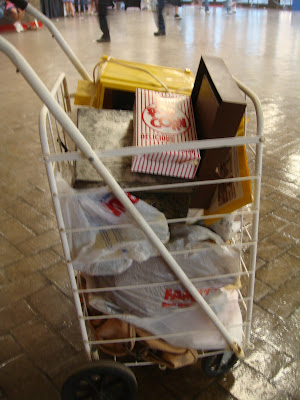 The popcorn provided needed sustenance for the journey. I just love my little granny cart! It makes doing the big flea market so much easier.