Some call it Booty!

I call it Treasure! Either way, it sells (and re-sells) the same. Here's a look at some of the finds from my Labor Day weekend excursions. You can kind of get an idea of some of the things I look for when I'm out hunting for booth stuff.

These three shots are part of the Unique haul: 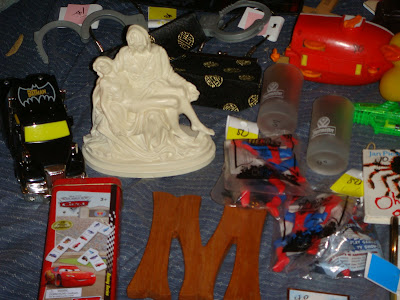 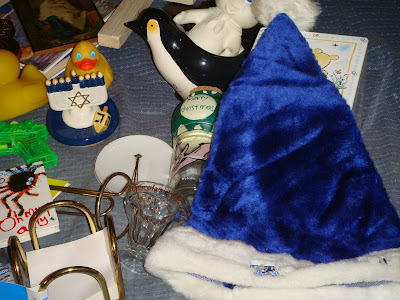 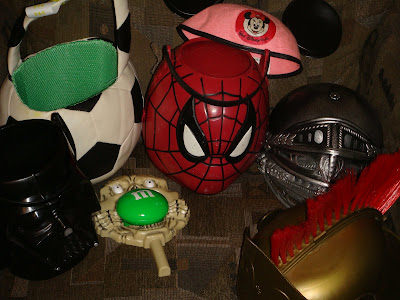 The booth was in part an outgrowth of not only my comic book and book habit, but also my collection of religious articles. I simply needed to clear some of that stuff out and felt it would take more than a yard sale to do it. It's established itself as one of the niches for my booth and I have regular visitors who search out these items. Not just Catholic-oriented items either. You can see the menorah and dreidel in the last picture. Judaica moves well for me. I also do pretty good with Buddhist and Hindu items, when I can find them. Carrying this stuff has not only enabled me to work on thinning my collection down to a few choice pieces, it's greatly reduced my urge to hang on to them. It's like I'm satisfying my interest in them by providing them for others to buy.

That big blue thing in the second photo is a University of Kentucky Santa hat, of course. And you didn't think such a thing existed. While it's not quite Santa-hat season yet, it is almost autumn, making all the Halloween gear in the last photo seasonally appropriate.

This next batch is part of the flea market stuff: 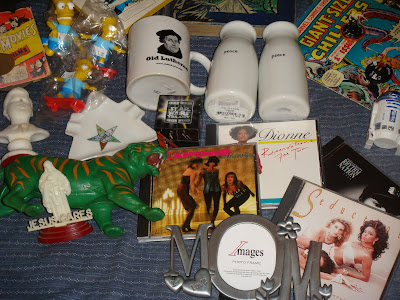 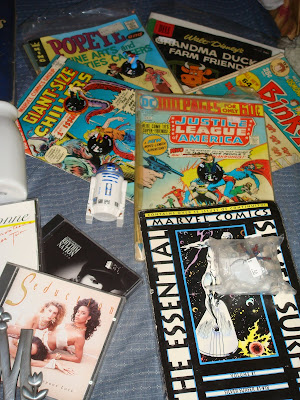 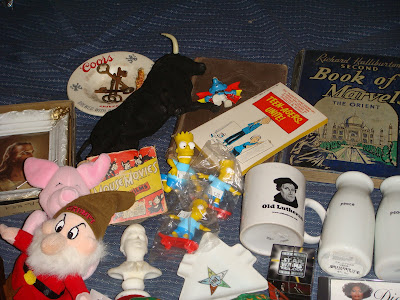 No real pattern to point out here, just a bunch of random stuff I think I can resell. The middle pic is the nerd haul. I'll keep most of the comics, I think. I'll get rid of the Silver Surfer book after I read it. I've been wanting to get ahold of that one for a while. I think that John Buscema's art with its heavy blacks and dark backgrounds of space will look really good in black and white, something you really can't say about a lot of other mainstream comics art that was intended for color publication. I always pick up CD's and DVD's when I can get them cheap enough, regardless of the artist or movie. It's good to have a small stock of those on hand at all times. Some of the items in these pics are actually new items I picked up to try and market as gift ideas for the holidays.

And a couple of final shots: 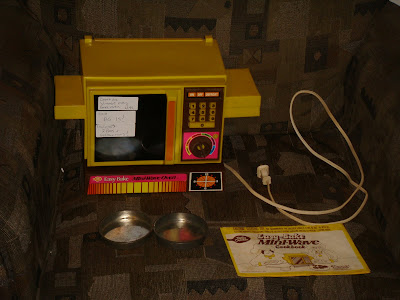 This is the infamous Easy Bake Oven from the flea market. I forgot to take a pic before I had it priced for the booth. The pans and instructions are in front. I bagged them and taped the bag to the top of the oven so everything would stay together. When I bought it, the pans had been jammed inside and I didn't even know they were there until I was putting it in the car. It was a cool deal. 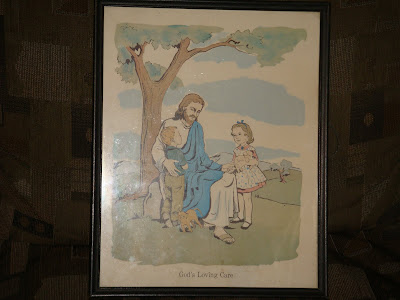 Another religious pic. I got this one because it's different from the more Catholicky, flowy Jesus stuff I usually see. This looks like a pic from an old Sunday School class. I thought it was kind of charming. The fact that it is framed is a plus. Framed religious pics move pretty well for me.

Well, that's about it for now. That's not everything I got, but a few highlights. Not so sure a photo-tour of my shopping spree would be that interesting. I'm going to try and do some new photos and maybe some video at the booth soon. Until then, take care and remember everyone: 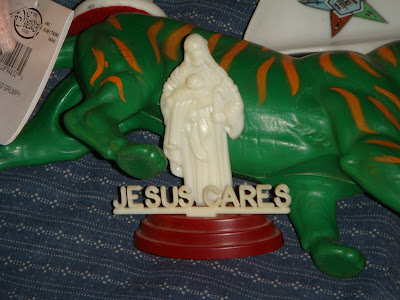 I had that GS Chillers, once upon a time