Yard Sale Round Up

Saling ended up on the light side today, for several reasons.

First, sales in general have been of a lesser quality this year. There is speculation on a forum I belong to that due to the economy people are either hanging on to their stuff longer or trying to sell it for higher prices than most of us are willing to pay. I know that I have seen even at huge annual sales less participation than in the past. The listings just weren't there for this weekend.

Second, I'm pretty well-stocked right now. I could not acquire anything for the next two months and still be able to adequately restock the booth, without even touching the backstock I have set aside for the winter months. I'm not sure how much more ahead of the curve I need to get, due to limited storage space. I do intend to keep picking stuff up, but now I can afford to be a little more selective.

Third, interestingly enough, I'm finding that I'm actually saling less now that I'm out looking for merch than I did when I was out just going for the heck of it. I tend to be a little less adventurous in my explorations now. Before, if I came up empty, it was no big deal. Now it can effect what the booth takes in. I tend to concentrate on certain neighborhoods, which are proven sources of the stuff I'm looking for and on places where I can get a lot of stuff at once: church sales, benefit sales, neighborhood sales. Not much of that action this weekend.

And, finally, the spirit was willing but the flesh was weak. I overslept considerably this morning. Consequence of being in an unfamiliar bed, I guess. I slept lousy last night, but got up early enough, then decided to lay back down for 30 minutes and ended up sleeping another couple of hours. So many folks end their sales between 11 and 12, that a late start can screw up your day.

However, there were some finds. I hit one of my favorite church sales, which thankfully was as good as past years. I got some nice vintage items, including a complete bridal shower bingo game and a stationery set. 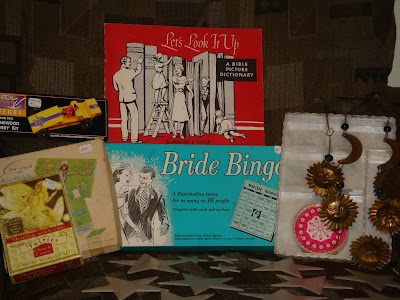 Finds from the church sale
I also found a cool little stash of old religious items. 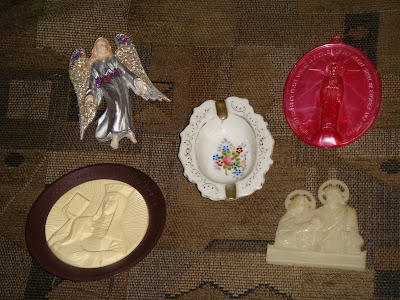 Religious items from sale. Item in center is small ashtray.
Everything else was kind of blah, until later in the evening, when I stumbled on someone's leftover freebie pile. Ended up pulling out a vintage wading pool, still in box, never used, plus a couple of other things. Most of it is "filler" stuff that I will use to fill out the spaces in the booth, but nothing. I would not have paid for it, but free is another matter. 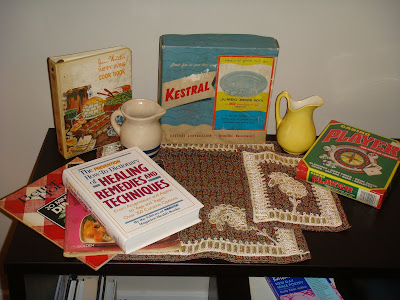 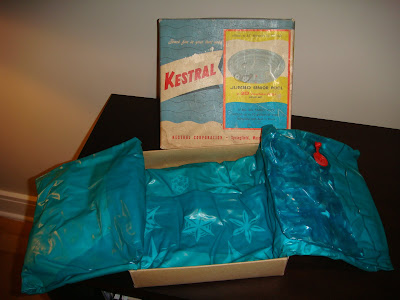 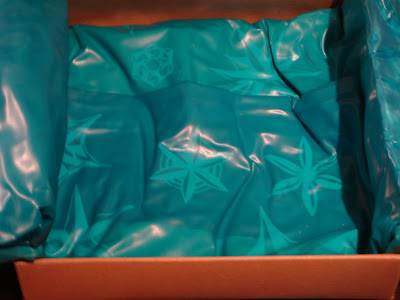