Queen of Fifty Cents has come up with a novel spin in the yard sale report back blog post. She turned it into a video! Now, there are lots of voiceover, blah blah, YouTube vids out there where people pan and scan their yard sale finds as they wax (sort of) eloquent about them. Queen Fifty has gone those shows several better with this fun montage of several weeks of finds arranged by price. Check it out.

I'm linking to her blog post rather than embedding the video in hopes that you'll also check the whole blog out. I just found her and it's pretty neat. In addition to the usual talk about her shopping adventures, she takes pics of the dogs at the houses where she stops. It's awfully sweet and worth scrolling down to see.

I'm really psyched that the Old 97's have a new release coming out. There's a sample mp3 here and a promo video here. Rhett Miller just gets sexier all the time! The song sounds great, so I'm plotting how I can scrape together enough for the CD. They're one of my favorite bands, so I'd really like to get this one. 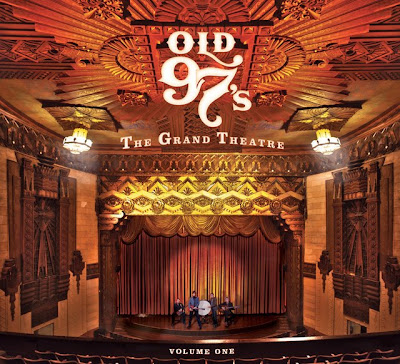 Image from the Old 97s website.
Speaking of music, Emmylou Harris is putting the final touches on a new album, due out next year. Of course, I am beyond psyched about this one. I'll donate plasma to get the money for it if I have to. She talks about it a little here. I'm surprised after all this time that she's still having to defend Wrecking Ball. Besides being one of the most amazing albums of her career, it's hardly the left turn that so many folks seem to think it is. I find it impossible to listen to just about any of the albums that came before it and not hear germs of the seeds that led to WB. Her entire career led to that album at the moment. I think her last release, All I Intended To Be, was kind of the culmination of the phase of the journey that began with Wrecking Ball, so it will be interesting to see where the new one leads. I know I'll be along for the ride for s

Louisville stinks these days, literally. Especially in our 'hood and the downtown area. We've had so little rain lately that the drains haven't been cleaned out in a while and the urban area is taking on that open sewer smell as a result. It's really disgusting, but there's nothing one can do but hope for a good downpour.

I think this is going to be a good month for the booth, but it will be a long crawl to get to the end. Last month, nearly every day was at least a 20-dollar sale day, sometimes a lot more. It was the best month I've ever had. This month, I'm back to the up and down path I'm more used to--20 bucks one day and 3 the next. It's going to be a long road to the end of the month at this rate. I'm bracing for the long haul.

The double space across the aisle from me has opened up. I'm thinking of consolidating my two single spots into it. I'll need to talk to the manager next time I'm in there.

Tomorrow is going to be a busy days for yard sales. Two church sales, plus a block sale in the "cool" part of town. I'll be hopping for sure, on the hunt for merchandise and hopefully a treasure or two.
Posted by EM at 10/08/2010 05:00:00 AM

I had a friend who was a big Emmylou fan but HATED Wrecking Ball. I said, "OK, give it to me!" She declined, and I had to buy it myself.

That Queen of Fifty Cents sounds like a lot of fun! :o)

Seriously, you really made my day. Thanks!