Let us proclaim the Litany of Saints!

A little while ago, I hit the jackpot at my favorite thrift, which is my favorite partly because it's run by a Catholic organization, which makes scores like this a little more likely than at other thrifts.  I was shopping at this place before I was a re-seller, back when all I was looking to do was expand my own collection of saints.

Anyway, I turned a corner, looked towards a set of shelf, when something golden caught my eye.  Could it be?  Yes!  It was! 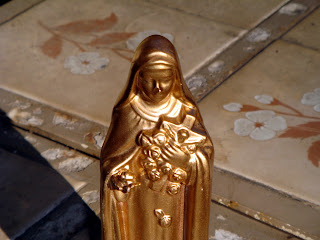 Pray for us!
And she had friends, all equally glittery and golden.  You can see the whole gang after the jump. 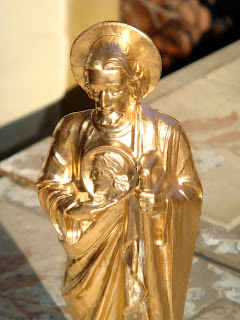 Pray for us!
Saint Anthony, 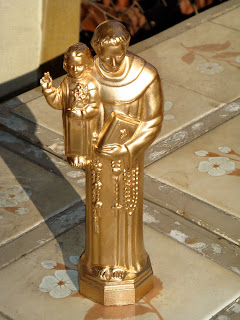 Pray for us!
Fancy aren't they?  It looks like someone at sometime took a fancy to shiny saints and took a can of spray paint to their collection.  Underneath the paint, some of them are plastic, while others are ceramic.  You can even see a little pre-paint nick on Therese's chin.  There's a residue of glue on the bottom of a couple of them, so my guess is that someone built some kind of personal altar at home and painted the figures to match it.

It probably looked pretty impressive.  Many of those do it yourself home altars usually are.  Last year, I bought a table top altar that someone had made, complete with glass candles that were wired to light up.

There were also a crucifix and a couple of smaller figures, all sprayed gold.  Everyone needs a hobby, I guess.

But the biggest thrill of this particular set of finds was this: 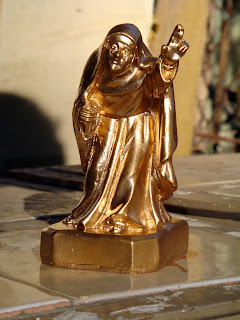 Pray for us!
SCORE!  Blessed Margaret is not a common figure to find.  She's also one of my favorite of the multitude of saints.  Her story is full of everything I love about medieval hagiography:  exaggerated holiness, combined with overwrought tragedy and intense personal suffering--her parents walled her into a chapel when her deformities weren't cured.  This is the kind of stuff that made me a fan of the saints.  (Well, this and Our Lady of Fatima, but that's a story for another time.)

Anywa, the only figure of BMoC I've ever seen is a statue of her at a shrine in a church here in town.  To actually find one just about makes me giddy!

There was one figure in the bunch that was still in its unpainted state.  Which is good, because I liked her piercing blue eyes, which would have been lost under the paint. 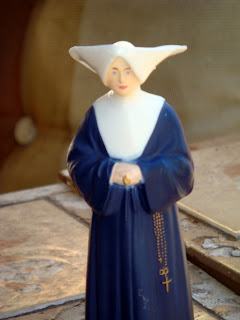 Pray for us!
She's the one who had the vision of the Miraculous Medal, and I have a soft spot for Marian visionaries.  I'm not sure how she escaped the golden plague, but I'm glad she did.  Maybe she came from a different set of donations?  I'll be keeping this one because I don't have a figure of her in my own collection.

But wait, there's more.  Later that very same week, at an annual multi-family yard sale that is on my list of sales never to miss.  I snagged a shoebox full of small figurines and other devotional objects. 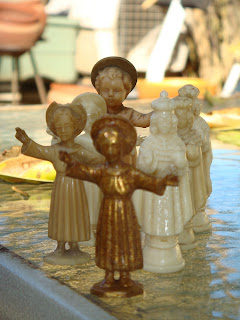 Pray for us!
Massive Multiple Marys, 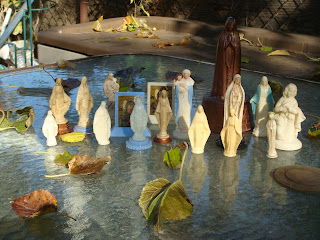 Pray for us!
Sacred Shoebox Stash of Saints, 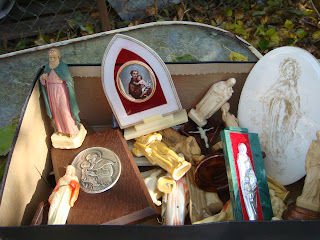 Pray for us!
There were almost a hundred items in the box, which made it a bargain.  They're all vintage, so most of them need a good cleaning, but this is a trove of unimagined proportions.  There were a few with some damage, but the overall condition of the collection is very good.  I think I'll bag the damaged ones together and sell them as a lot.  They'll still sell.

From the same seller, I also got a huge stash of devotional booklets and pamphlets, novenas, etc.  All vintage.  And three salesman's sample boxes of holy cards!

It's all eventually destined for the booth except for a children's booklet on Mary by my favorite old-fashioned Catholic author.  And this: 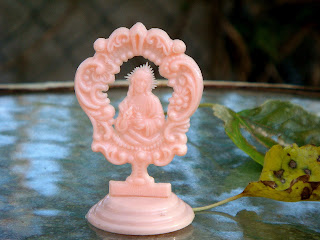 Hey, Eddie: cool. I find your fascination with these Catholic icons..."FASCINATING" (in my best Leonard Nimoy imitation).

But more mundane question - how do you do the continuation thing in Blogger? I know how in WordPress.
Thanks!