"Where do you find all this stuff?"

It makes you stand out when you're in a mall that has space for up to 300 other vendors.  It also helps build a regular customer base.  I hear from customers and mall staff a lot that I have lots of people who come in regularly to shop my booth.  In fact, I will definitely hear from them if I haven't done a big restock in a while.  It's a lot of work to keep your fans happy.

Back to the question at hand, though.  I'm not one of these that will out and out share his sources with folks.  For one thing, there's too much competition for stuff.  For another, so many other dealers act like jerks when they're out getting junk that I really don't ever want to be associated with that in a source's mind.  One of my most unfavorite things to do is go to a dealer's night at a sale.  There's always someone there trying to out-grab and shove everyone else.  I just hate that kind of behavior.  Besides, at some of my sources, I've worked hard to build a relationship, and I don't want that spoiled by some jerky dealer.

On the other hand, if we don't share information that can help other people, what good are we?  That's just being selfish, and I don't like selfishness.  So, here's my answer to the question:

I'm not being facetious.  To quote a pair of my favorite philosophers, "There's treasure everywhere!" 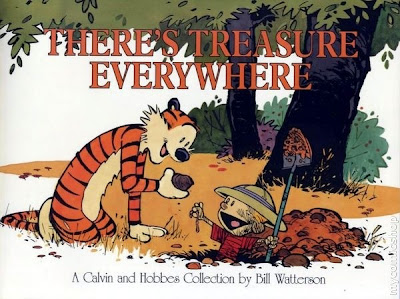 You just have to know how to spot it.

Here are some examples of places I get stuff to sell:

Auctions.  I don't do real, honest-to-god live auctions that much.  There's often a lot of grubby, grabby dealers there with deeper pockets than me fighting over the good stuff.  But, when I do go, I  tend to follow one simple line of attack:  Let them do as they will. I don't care.

I'll let them slug it out over the big ticket items and be done with it.  Instead, I'll focus on the mixed lots and boxed lots of all kinds of stuff.  There's always a good variety and it's usually cheap.  Sometimes, the auctioneer even has to pile things up together to get even one bid.  I went to the auction when the local Salvation Army closed its thrifts and hauled off two truckloads of stuff (including some small furniture) for less than a hundred bucks.  And it sold and sold and sold and sold.

Truth be told, there's always going to be a few clunker items in a mixed lot like that.  Just take them to Goodwill for the tax deduction and focus on the stuff you know you can sell.  When you get the whole lot for a couple of bucks, it's pretty easy to make money, and no great loss if you have to ditch a few items.

Sitting on a Curb.﻿  It's no secret that I love junk set out week, and I'm not the only one.  But, if you're observant, there's lots of stuff available at other times as well.  Just pay attention when you're out, check it out really good, and you're bound to score.  Except during set out periods, it's not a source that's worth setting out on a deliberate trip for.  Rather it's one to be surprised by when you find it.  Tip:  Sometimes, if you pass through an area several hours after a neighborhood sale has ended, you can find houses where they've just hauled their leftovers to the curb.  Remember to be neat!  Another tip:  Check out college campuses around the end of the semester.

Other Sellers.  We buy off each other.  Yes, we do.  A few weeks ago, I bought a bunch of vintage priest's stoles from a vendor at the Peddlers Mall and took 'em straight to YesterNook.  Sold 'em the next day.  It's hard sometimes to keep your eyes open for a good buy when you're also supposed to be working.  It's easy for the other booths in your mall to become just part of the background, but it pays to keep your eyes open.  Rest assured that other dealers are doing it to you as well.  It's all a part of the loop.

Other Junk Stores.  I'm a vendor in two very different establishments in Louisville.  There are close to a dozen other vendor's malls in or near town, and another three or four that fall into the YesterNook category.  You bet I shop at 'em.  Particularly in the winter, when there aren't many yard sales.  There are a couple that I really like to it.  One because it is so well stocked and organized, and a couple because they're not.  Sometimes when you have to dig, you turn up all kinds of things!  It's that whole loop thing rearing it's cute little head again.

Something I'm really wanting to get into are the more "mom and pop" junk/hoarder stores.  There are a bunch in the west end of town.  Some folks I know swear by them.  Price-wise, they can be hit or miss though.  One in town is called "It Takes 2 Dollars or More."  Every time I pass that one, I think that someone's not really clear on the concept.  One day, I'll have to check it out.

Thrifts. This is another area where there's not too much to say, because it's all been covered, but should be mentioned anyway. There's not a week that goes by that I don't hit at least one thrift.  I know some dealers who are really down on the thrift, but the truth is that you can pretty reliably find decent stuff at a price you can re-sell from without much problem at most thrifts.

There are some thrifts in town that aren't worth regular visits, but every thrift is worth an occasional visit.  There are some I only pop into once or twice a year, if only to check and see if they've improved at all.  One of the things we lack here in town are smaller thrifts that aren't affiliated with the "big guys."  You know what I mean, community thrifts, church thrifts, and the like.  We have a couple, but not many.  Those are the ones where the good stuff is usually found.

Thrifts are especially useful in the winter when there just aren't any yard sales.

Regular Retail Outlets.  On those rare occasions when I do go into a regular retail store, I make a beeline for one particular area:  the clearance aisle!  Now, clearance sections are not what they used to be, but you can still find somethings that you can re-sell and make money from.  If you can get a new item at 75-90% off retail, you can always sell it for under retail and still turn a profit.  Post-holiday clearances are the best!  And not just Christmas, but also Halloween and Easter.

Friends, Neighbors, and Loved Ones.  Once people around you find out that you re-sell, they'll often save things for you or pass stuff on to you.  Sometimes, helping a friend move can get you dibs on the stuff they don't want to mess with.  This is kind of a tricky area to work with, but it can yield some awesome stuff.  Everybody has an item or two that they don't want/need, but is not enough to have a yard sale over or make a trip to Goodwill.

What you have to do is determine exactly what they are offering.  Are they giving it?  Do they want you to buy it form them?  Do they want you to sell it for them?  I try to avoid selling for someone else as much as  I can.  It's just too much of a hassle, especially if the item takes a while to sell.

I do offer money when someone offers me an item, but you have to be careful there, too.  You want to be fair, but you also have to make money in the end.  If someone doesn't understand this and thinks you're low-balling them, you could harm your relationship, so tread carefully.  A lot of times, though, they're just looking to get rid of a couple of items and just want to help you out.

Friends of Friends, Neighbors, and Loved Ones.  The one true American Pickers style "pick" I've ever done was set up by a friend who helped me get into a relative's basement clean out. It was one of the coolest afternoons I've ever had.  Your interpersonal connections are one of the greatest resources that you've got.

Trash Cans and Dumpsters. Okay, I've never actually climbed into a dumpster and I don't go around randomly opening trash cans.  I'm just not that agile/bold.  But, when I see something on top or within reach--I GO FOR IT!

The other day, I was waiting at a light, when a guy got out of his SUV and threw something into a corner trash can.  It was either a large candle stick or a table leg.  I had to find out, so when the light changed, I stopped at the trash can and pulled it out.  It was a nice ceramic candle holder.  SCORE!


People Cleaning out Offices or Storerooms.  "What are you doing?"  "Cleaning out this room."  "What are you going to do with this stuff?"  "Pitch it."  "Mind if I take some of it?"  "Help yourself."  See how easy that was?  Among things I've gotten this way are flower vases and lots of the labels I use for pricing.

And this list is by no means exhaustive.  I know dealers who work in construction and renovation and are given furniture and other items by their clients who are getting rid of it.  I'm a little old to be learning how to paint and hammer, so that's a closed route to me, but it seems to be a viable option for others.  I know others who have helped someone clean out a house and were given their choice of what was being tossed.  There are no hard and fast rules about sources.

In the end, what it takes to be a good junk-hunter is a willingness to always be on the prowl.  Always.  Stuff pops up where (and when) you least expect it.  Be willing to pull the car over on a whim and check something out.  You never know when it will pay off.

After that, you have to have vision.  Can you see someone paying you for this item?  It doesn't matter if the people with you can't.  Creativity and a willingness to go so far outside the box that you end up selling the box will help, too.  If you stay in a rut, you're likely to miss many wonderful opportunities.

Finally, you have to be willing to fail.  Striking out is part of the game.  That awesome end table on the curb will turn out to have a missing leg.  The thrift will have noting but chipped polyresin fairy statues.  Everything at the yard sale will be overpriced.  Don't get discouraged.   Something wonderful could be around the corner.  The junking gods can be cruel sometimes, but they can also be very generous.

Give it a try and see what happens.  Happy hunting!

Very ecologically sound, you are. Not to mention resourceful.

Thanks, Rog. I've been knocking around a few ideas for a piece on the "green" aspects of re-selling and how to enhance them.