Spoke too soon, I did.  No sooner had I posted about my sales streak at YesterNook last week, than it came to an end that very day.  Ah, well!  Them's the breaks, I guess.  And it was the longest sales run I've had there, so I'll take it and be grateful.

Monday actually ended up being the first (and hopefully last) time I had no sales at either venue!  Discovered I don't really like that felling.  Not one little bit.  No siree!

I entered the triple digits in my post totals for 2012 last week.  That record will be mine!  This I swear!

THOUGHT/REQUEST:  Can we please maybe try to have Summer without melting any more than we already have????  We're in the midst of 100+ degree heat (like lots of you are right now) and it's flat out killing us!  Poor, little, covered-in-black-fur Kosh is miserable!

The heat impacts the booths, too, in some obvious and not-so-obvious ways.  Obviously, in this heat fewer people want to get out and shop and fewer sellers want to get out and hunt junk, but that's kind of obvious.  I got hit with some things I didn't expect the other day though, when some candles I had in tubs of merchandise melted in the car!  And I'm not talking about "getting a little soft" melting, either.  I'm talking about "turned into a pool of wax" melting!

On booth stock days, I load the car in the morning and then Keith takes it to work.  I go do my own things and then bus to the mall.  I spend the afternoon tidying and rearranging the spaces and Keith runs the tubs of stuff by when he gets off work.  I can then put things out pretty quickly, since I've spent the day making space for them.

So, anyway, I was loading the car the other day, when I saw a candle in the top of the box.  Thinking the the heat would not be good for it, I placed it inside a large bowl, in case it melted.  Which it did, filling the bowl with a pool of wax.

Now, you're probably asking why I just didn't take the candle out and take it to the booth another time?  Well, because I'm an idiot, that's why!!!  I can't explain the dumb things I do.  I just do them!

Like most of the rest of the country, I was surprised by the Supreme Court decision on the Health Care law last week.  Unlike many, though, I was pleasantly surprised.  There is so much in that law that is very, very good that it would have been a tragedy had it been overturned.  I will admit that I don't think it goes far enough, but it's a step in the right direction.

Naive fool that I am, I honestly entertained for the briefest of moments the thought that, because Roberts was in effect the swing vote on this decision, maybe (just maybe) we might start to see a lessening of this poisonous political polarization that is tearing the country apart.  And then, I got smacked back to reality.  Sigh.  For all the fuss these damn Tea Partiers make about the constitution, they sure don't seem to know what it says.

However, perhaps the biggest surprise for Keith and I personally was finding this on the front page of the CNN web page the day before: 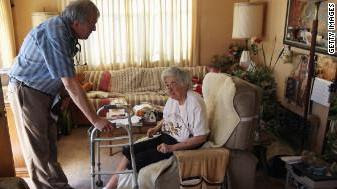 That sweet little lady is Keith's aunt!  And, yes, she really is as sweet as she appears to be.  We've not yet been able to fond out how CNN got the pic.  Even more awesome than seeing her on CNN was seeing her share the front page with the Queen: 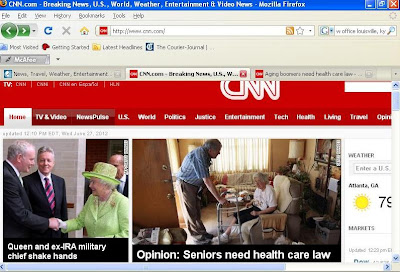 Finally, a sad note.  Susanna Clark passed away last week.  For those who don't know, she was the wife of legendary singer/songwriter Guy Clark and a fine songwriter in her own right.  She co-wrote one of Emmylou Harris' most lovely songs:

That song comes from one of my favorite Emmylou albums, Quarter Moon in a Ten Cent Town.  The album title comes from the line in the song.  So many good lines in that song.  Susanna Clark also painted the image on the cover of the album: Her death has got me to thinking about one of her husband's most beautiful songs, "Magnolia Wind," in which a man sings about living without his sweetheart. This version features John Prine and Emmylou and comes from a recent tribute album to Clark.  That's Guy and Susanna on the cover.

There is no global warming, some folks keep telling me. OK.

Do your flea markets send you emails or do you check your tickets to see your sales? The only way we can see what we sold is to rifle through our envelopes of tickets. That, ans just see what is missing from our areas, of course. I look through my tickets on the days I work and total up my $. I sell a lot and my checks are great. Funny this is, I rarely EVER sell anything from my own booths on the days I work.

It is roasting hot here and I HATE IT.