Nutrition Education Across the Ages

A couple of weeks ago, I bought a bunch of stuff from a former science teacher.  It was some of the coolest stashes I've ever bought at a yard sale.  There were prisms, magnets of all sizes and shapes, experiment guides, tuning forks, and all kinds of other stuff.  There was also a big bag of nutrition information stuff, which I bought because I liked the graphics.  I love vintage graphics and printing!

Basically, the bag contained a huge bunch of pictures of various food items, with nutrition information on the back.  There was also one instruction booklet.  When I go to looking through everything, I realized that there were actually two sets of the pictures.  One was copyrighted 1974 by the National Dairy Board on the back of each pic.  The booklet went with this set, as well.  The other set had no production or copyright info on it, but I believe that it was probably produced by the NDB as well, since they were similar to the others.  While it wasn't dated, I do believe that is was good deal older than the other set.  My guess is mid to late 50's, maybe early 60's.

I'm basing that on the artwork itself, plus some of the food featured.  Everything is depicted on a plate that looks suspiciously like Fiestaware!  What fun!  (Apologies for the blurry pics.  I didn't sit down to edit these until several days after I took them, and the sets were already at the booths by that time.) 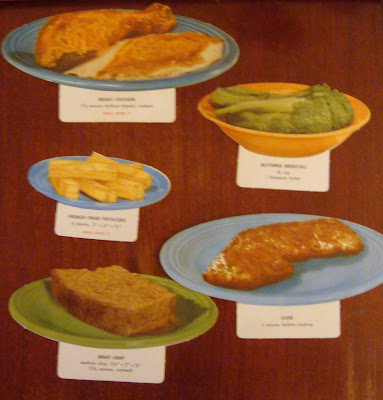 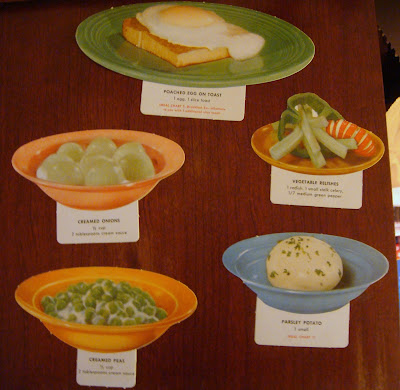 Can't you just see June Cleaver whipping these up for Ward and the boys? 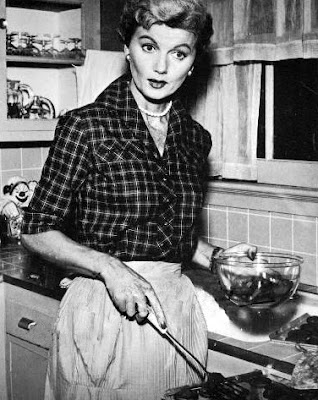 In addition, practically everything in the older set is a dish that would be made at home, or at the very least in a cafeteria setting.  No fast food. No convenience food.  Very little junk food.  I know this pic is very blurry, but it indicates the serving size for "French Fried Potatoes" is 6 pieces!  Of course, those are huge, thick-cut fries on that there plate, but still!  Only six!  C'mon June! 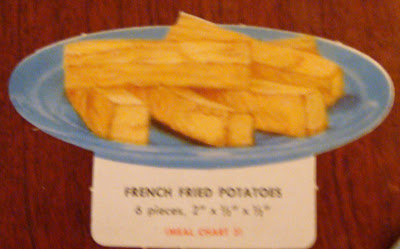 In contrast, the more "modern" set shows very few dishes at all.  All the food just kind of floats there.  That brown smear in the bottom is peanut butter, something that did not appear at all in the other set. 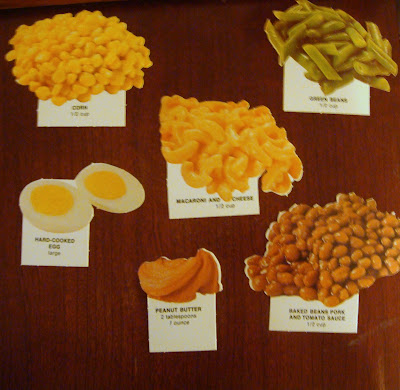 About the only items for serving food in the newer set are glasses for the milk, and those are slightly more modern in design than the other one.  In this pic, the 70's glass is on the left and the older one on the right. 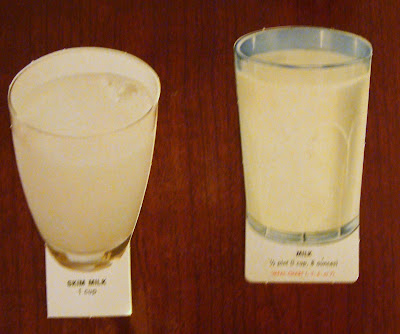 Also in the 70's set, the old-fashioned dishes are gone and have been replaced by fast food, convenience items, and junk food. You could probably trace the beginning of the US obesity problem to this era.  Except for the fries, none of the items below had a counter-part in the older series.  And, you'll note that the serving size for the fries is larger, even if the fries themselves are smaller. 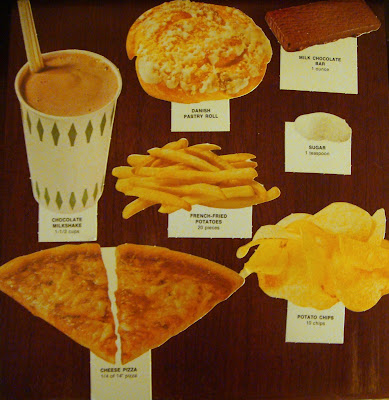 One of the most interesting contrasts I found in the two sets was in the presentation of condiments.  On the left you have the 70's set, which looks like something straight out of McDonalds. On the right is the older set, which has a little more of a restaurant feel to it. 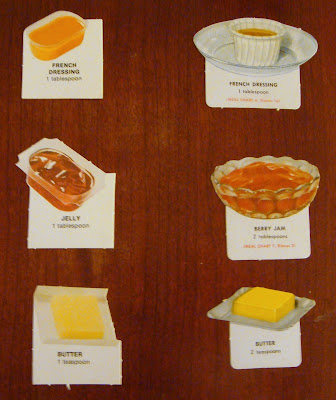 And finally, to close out, from the older set comes a look at vintage dairy products. 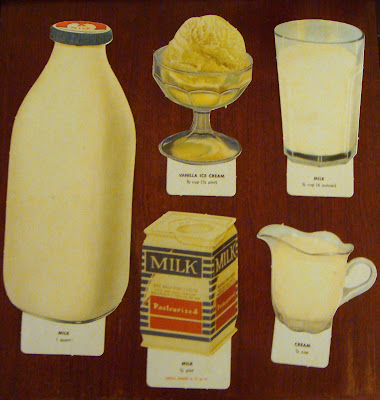 I LOVE these and wish I would have found them. But, since I didn't...I am glad that you did. I went to an estate Sale of a teacher years ago before I started collecting vintage or reselling it. I remember looking at piles of flash cards and vintage stationery supplies and thinking, "Who will buy this stuff?" Well, now the answer is ME!

I have a set of the older cards. I love them And I could never part with them. I have considered framing some of them for my kitchen but have NO wall space.lol

Thanks for your comment, Debra. I think they would look great framed!