Welcome to another chapter of my so-called life.  Things are just too damn hectic right now, and I have no idea how to bring them under control.  None.  I feel like Chiquito is my life organizer right now.  Work wraps up next Thursday for a three week hiatus, so there's a lot to do there before the break.  I'm trying to get some things done at home before my surgery at the end of the month lays me up for a bit.  Both booths are running through merchandise right now and I can hardly keep up with them.  It seems like everywhere I look all I see is more stuff that needs to be done.  That doesn't even count anything holiday related!  Ack!

I know I sound like a broken record on Mondays, but I feel like the blog just kind of fell apart this month, after doing so well for so long. It's a little discouraging.  I hope you're all enjoying the Cthulu carols.  That may be the only holiday spirit (heh!) you get from me.

I had a couple of nice customer encounters while I was working at the booth yesterday.  Usually, I just try to get me job done and work around them, but from time to time they want to talk.  I met a couple of Coke glass collectors and helped them find some other booths that also carry them.  I also had a lovely chat with a woman who told me that she always makes a point to come to my booth when she's in.  She said she always finds something there.  Then, she turned around and snatched up four holiday bowls!

I need to get a pic of my Christmas display before it all sells away.  I'm down to only three sets of boxed ornaments.  My dishes are selling well.  Individual ornaments always do good for me too.  The gift items are starting to move, finally.  I need to get a Craigslist post of them up.  Can't believe I haven't done that yet.  I'm out of wrapping paper, but my Christmas cards, Holiday music, and tree toppers don't seem to be moving at all.

Chiquito has taken to waking me up in the middle of the night for attention.  If he doesn't get it, he attacks my C-PAP hose or my pillows until he does.  Sometimes, I just want to sleep.  Thing is, he'll just lay there, if I'll put a hand on him, but he almost always tries to lay down behind me instead of in front of me, which causes problems.  When I'm sound asleep, I'm not keen on rolling over, which means the shenanigans start.

A couple of nights ago, I'm fussing with him and trying to get him to stop bothering stuff and either lay down or leave, when Keith rolls over and says:

"Angela Merkel is coming to take care of that!"

"What?"  (The only response I can think of to a statement like that.)

"Angela Merkel will take care of him."

"But Angela Merkel is the Chancellor of Germany!"

And then he goes back to sleep.  In the morning, he doesn't remember the conversation at all.  Apparently, Chiquito and I are causing an international incident.  Or something. 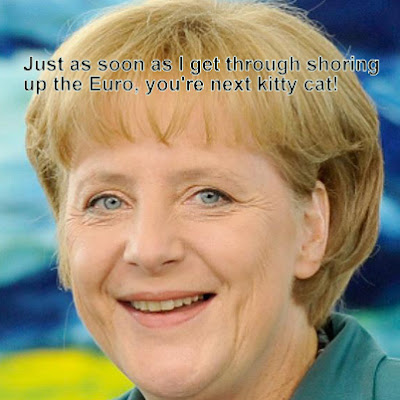