Eddie-tor's Note:  The title of today's post is an homage to a long-running classic comic book.  Anyone know what it is?

Saturday was an interesting day:  Lots of sales.  Lots of finds.  Lots of misses.  And lots of stories.

Keith broke a vase at the first sale we stopped at.  I was absolutely mortified, but the seller took it in stride.  He did pay for it, even though she said he didn't have to.  After we left, I told him we had to review the rules:  "We don't rummage around and break the people's nice things."

I was making quite a pile at this sale, too.  If she had thrown us out, I would have been heartbroken! 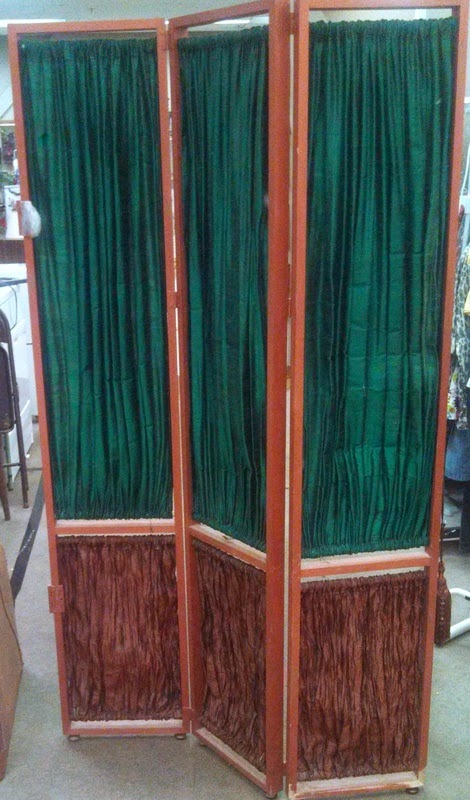 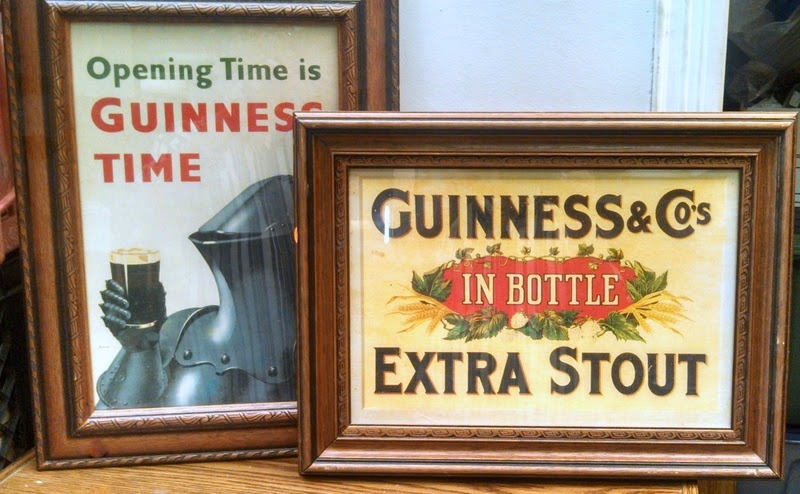 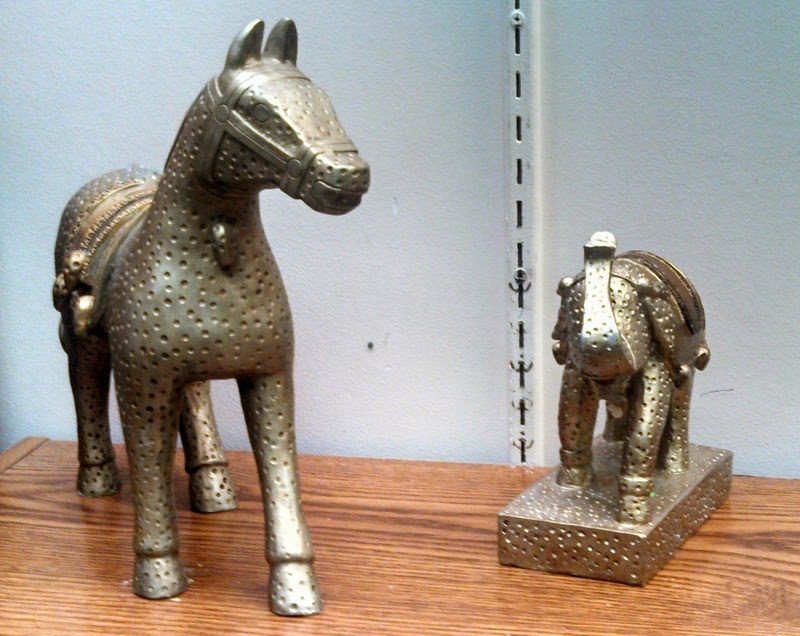 I bought one of those Rubbermaid-like plastic storage shelves at the next sale.  I always need more shelving, either in the booth or the storage room.  I can never be organized enough it seems.  The seller was being very dramatic about everything he sold.  Big sighs and moans every time someone asked about a price:  "Oh!  Well, I guess that is going to be a dollar!"  He did everything but put his hand to his forehead and swoon.

I went to the first sale I've ever been to run by nuns.  These were plainclothes, modern nuns, not the ones in habits, which would had made it more cool.  I recognized one of them from a job I had about twenty years ago.  It was one of the only estate sales I've ever been at where they had items priced at ten cents.  I nearly died when I got to this one.  There was a huge mass of awesome vintage small furniture that had already been sold in the driveway.  I checked out the prices as I went in the house.  There were vintage metal patio tables marked for seventy-five cents!  I died, I tell you!  That whole mass of furniture cost about ten bucks all together, and there was a ton of it!  I try never to dwell on items that I miss out on, but this batch made it pretty hard.

Still, I did pretty well!

Of course, there would be religious items at a nun-run sale!  I love that green pitcher.

The next sale we hit, had this amazing Hoosier cabinet that had been priced at $25!  Of course, it was already sold.  Must...not...dwell...on it!  This is where I found the mysterious metal pot. 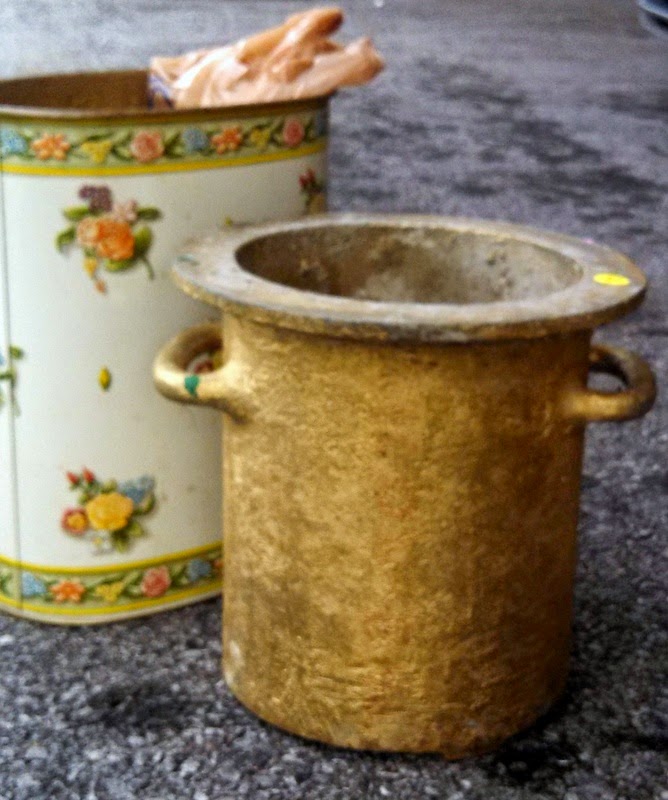 It's heavy and solid.  The sides are a couple of inches thick and the handles are big and round.  It's been spray-painted gold, to boot!  In other words, it is exactly the kind of thing I simply cannot pass up. I'm going to sell it as a planter, but it doesn't have any drainage.  It would look nice on a porch with a fern, though.  The seller said her mother owned it for years, but never knew what it was really for.  Any ideas?


We hit a benefit sale for a group called the "Home Birth Coalition."  I had never heard of it before, but they had good stuff.  One mother there was breast-feeding her child while she was shopping.  I've never seen that at a sale before.  I got a bunch of stuff there.

I had to stalk a little girl of about two to get that Snoopy.  She was kind of wandering along and picking up things, carrying them around for a bit, and then dropping them and picking up something else.  You know, like little kids do.  Her mom would sweep in behind her and put whatever she dropped back where it came from.  She dug this awesome Snoopy out of a box of stuffed animals and I had to have it!  Of course, she held on to it longer than anything else!  I was beginning to think I was going to lose out on it, when she saw a doll and down went Snoopy!  Mom swooped in and I was right behind her!  Yes, I know how creepy that sounds.  Yes, I would do it again.  At least, I draw the line at snatching it out of her hand!  I do have standards!

When we pulled up at this sale, I saw the most awesome thing I had seen all day:  this vintage drafting stand/desk.  I love the little storage cabinet underneath!  I checked it out when we got there, but wasn't sure it would fit in the van.  My routine in this situation is to buy my other items, then check out the van, ask Keith what he thinks, then go buy the large, unwieldy item.


So, when I asked Keith, whose words of wisdom I value greatly, he lays this on me:  "You already decided to get it as soon as you saw it.  It doesn't really matter what I have to say."  I'm still deciding whether I'm shocked, hurt, tickled or amazed by this observation.  We had to take several things out and repack the van, but it went in!  You can kind of see how we had to work it in in the Mazda pic.  it was a bit of a struggle, but it was totally worth it!

At the very next sale, I was welcomed by a couple sitting on a couch on the porch.  "Let us know when you're ready and we'll get off your couch."  My kind of people!  I didn't get the couch, but I did buy some Bybee pottery for a price that was so good, I had to ask if it was correct.  Then I saw this:

And I turned to the couple on the couch and said:  "That's not my couch, but that is my table!"  For the first time ever, I had to pay for an item and leave it.  It just would not go in the van with the drafting table.  I'm wondering if this is a trend for the future.

Funny, I can't remember the last time I saw a nun in a habit. And something marked for only 10 cents? That's a rarity! That drafting table is a great find. What is the model of that little yellow car?

A nun sale!?! I do try not to dwell on the things I have missed, but there is always that twinge if only ...

Great drafting table - I would have dragged it home if I had to.

Oh what great finds. That robot toy is so fab! My oldest had one of those and LOVED it!

Score on the Ikea stuff - that will fly out of your booth!