I guess now that everyone has forgotten about me, I should start blogging again.  This is how you have a blog for over a decade, yet only have a little over 1500 posts.  I told you:  I'm not very good at this.  Never have been. Probably never will be.  But, still, I keep doing it.  Most of the time.

You can kind of look at the index of my postings and see the gaps in my history.  While I do think some of them were understandable, a lot of them were caused by my seeming inability to get back on the horse after getting away from it for a bit.  Once I get out of the habit of doing something, it gets harder and harder for me to get back into it, even if it was something I really loved doing.

In the old days, it was usually just Roger who would check on me and urge me back into the fray.  These days, there are several of you peering under rocks and wondering where I've gone.  It's kind of a nice feeling to know that there are people who miss you, even if your primary contact with them is through a silly little blog.

Truth is, I was having a particularly bad couple of weeks and I just didn't want to set Debbie Downer and Bitchy Betty loose on the blog.  I hate to whine here, even though I do it so freaking much.  Compound that with the downside of having fantastic sales (which I just discovered):  You have to work your space all the time to keep up.  All.  The.  Time.

I ended up not having enough time to process everything else going on, and I didn't want the blog to suffer for it.  I started a "Monday Rambles" post two weeks ago, but trashed it when I saw just how negative it was.  I can write about the bad things, but I don't want to wallow in them.  At least not here.

Everything is better now.  At least a little.  One of the situations I was dealing with is going to take a little more time to resolve, but it is manageable at this point.

The lowest point came when another vendor actually accused me of stealing from her. That was resolved pretty quickly, but I just wasn't in the mood that day to be called a thief over something I bought and paid for.

Health-wise, I seem to be doing okay.  The steroid is messing with my blood sugar, which is not good.  This resulted in a very bad conversation with a nurse at the cancer center who basically told me I was stubborn and uncooperative, but in nicer terms.  She was acting like I was rejecting her advice over the situation, when she really wasn't giving any.  I still have no clue what it was she thought I should be doing.  I told her I was going to talk to my PCP about it and left.  I was upset about the whole situation for days.

My own sales have kind of crapped out over the past couple of weeks.  I've still had some really, really good days, just not one right after the other like I was having.  I was having sales, but they were way lower than they'd been running and way below my daily goal.  Thankfully, I was far enough ahead that I had a big cushion in my daily average, which softened the blow, but even that was starting to get worn down.

I was seriously worried that I might have some of my best days ever and still end up with the same old check at the end.  This business drives me nuts sometimes.  Needless to say, none of this really helped with my mood.  I seem to be recovering, I think.  It looks like, barring a string so low/no sales days that I'll come out well for the month and will even set a record.  We'll see, I guess.

It's junk set out time in our neighborhood!  The neighborhood next to ours had its set out last week, so I prowled it a little, but basically came up empty-handed.  My own neck of the woods is full of early-birds and head-starters, so stuff showed up all week, even though you're not supposed to set anything out until Friday of your week.

I've gotten several great things all through the week, and I've never gotten more than two streets away.  Today will be a big sweep, as I try to dodge the scrappers and other pickers.  Competition is somewhat fierce this year.  It's supposed to storm tomorrow and Wednesday, which will kill everything off.  I'll have pics later this week, but here's a teaser.

The Official Sign that Junk Set Out Has Begun: 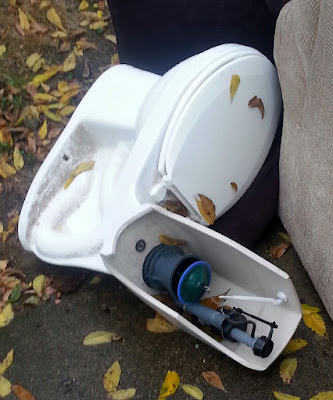 Well, I check every day, just in case. Hey, I just quoted you for my November 3 post.

Glad you're back, Eddie. I checked quite often as I was worried. Take it easy, you're health and peace of mind are the most important things.

Glad to see you're back and everything is okay on the health front. Looking forward to your weekly finds posts!

Not to jump on you for not posting, but I do eagerly check each day to see if there is an Eddie post. Sales here have done the same thing - started the month great and dropped to so-so. Other dealers around the area - same thing. I am sorry you have been down and I do know sometimes a blog is just MEH.I get that way. Steroids and diabetes do not mix well. I lower my blood sugar by abstaining from all grains - just eat eggs, lean meat, hard cheese, nuts and seeds for a couple of weeks.It usually works along with a daily walk or extreme booth cleaning.

Checked every day Eddie. Hugs. My booths are doing the same type of dance, great start, nothing, sales, slow down, good sales, slow down to crawling etc. I started putting in Christmas stuff last week. Hope you finds some decent stuff before the rains hit. Its tough when the health care people can't be clear about whatever they are talking about. Don't stop blogging- even just a quick "I'm here back soon" is good (guess thats another reason that your Retro is good). More hugs.

Eddie I miss you but I so get that sometimes life gets in the way of blogging! I get down and just don't feel like I have anything to say. I am ALWAYS happy to see a post from you. Sending big hugs and hoping things are looking a bit better!
xoxo

Whenever I do a Phone Dump post - you can bet your bottom dollar that I am in the dumps and not in a good mood for blogging. I have a huge post ready to go but it is SO depressing, I don't want everyone feeling sorry for me. (It's all small stuff and most of it is better now anyway). I see you post on FB so I know you are still chugging along. Hurry up Thanksgiving! :)

Glad you are checking in good news or not. Next time I hope it is ALL good news...life...you just never know.

I figured something was up based on the few FB things you posted. I think of you every day and I can't wait until Chris gets to meet you at WW. It's coming up quick. I went a week without blogging because I just didn't have the time nor did I feel like putting in the effort. Working full time really blows and kills all my enthusiasm. I find that FB is a better outlet for a quick little "this is what's going on" update. Never thought I'd say that.