Kind of a late Sunday post here.  Been that kind of a day. I think most posts this week will be late evening, so please bear with me.

We had a lot of fun on Highway 60 Saturday, despite the really crappy weather.  It was cold, windy, and off and on rainy.  As a result, there were fewer sellers out.  I cannot blame them at all for that.  After all, common sense dictates that on cold rainy days you sit inside and watch old movies with the kitty on your lap while a crock pot of chili slow cooks in the kitchen.

Of course, there were still a good number of folks who recognized a simple fact:  There are insane shoppers who will come out in weather like this looking for bargains!  And they determined to be out there with bargains to be had.

The weather also made for an unspoken bargaining chip in our favor, as I am sure I got some deals simply because some folks were a little tired of the weather.  I also found something I've never seen on Highway 60 before--free boxes.  Some folks had just given up and left their stuff out for whoever wanted it.

I'll have more stories later in the week, along with the finds reveal.  In the meantime, here's the Mazda shot. 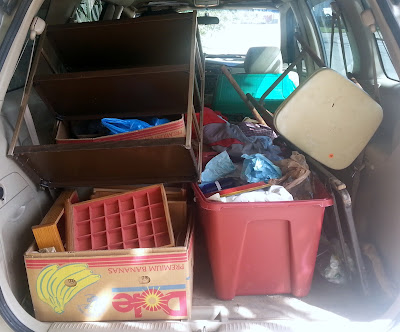 I am half glad that I wasn't able to make the trip down for the sale. Saturday was cold and rainy all day here too. I spent the day gathering props for my wedding from my stash of stuff (yep, I've got THAT much stuff). 12 days!

When it rained all day the first day of the 127 sale, I saw lots of folks who had covered up their stuff, but weren't selling. I also encountered a lot of people who were ready to make bargains like it was the last day of the sale. There's always a plus side to crappy weather.

So, what do I see in the Mazda?? I see a shelf unit (can't ever have enough of those!) and an old metal stool. I'm really curious about what goodies are hiding in the totes and boxes. :)

You've been blogging for 12 years!?! Isn't that some kind of record? I think I see a typewriter, some great collector boxes, and other exciting things. It rained so hard all the county-wide sales were cancelled due to flooding.

Shelves, divided drawers, stool,metal trays, bottle and boxes of stuff!! I also did not realize you had been blogging for 12 years! Wowsers!

possibly an old coke crate? and what I hope IS NOT an old person bath seat, but rather an awesome vintage stool??