Your Chiquito of the Month for October

Sorry for the lack of posts this week.  The booth has been kicking my ass. Will get back in the groove next week.

In the meantime, here' is your October Chiquito of the Month. 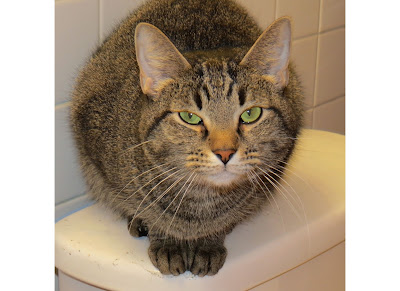 In fact, Tuesday night when I was getting into bed, I found that he had left me a present on my side of the bed--a dead mouse.  (I'll spare you the pictures.  You're welcome.)  I told Keith that must mean that he loves me more.

Actually, I think he was trying to make up for the one that he had SET LOOSE in the bedroom the week before.  He came running in with something n his mouth, and I thought "Oh no!"  While I was looking for something to catch it in, he dropped it and it scurried off before he could grab it.

The usual routine around here when a cat has a mouse is to get the mouse away as quickly as possible and then toss it over the back fence.  It worked with every cat we had until Chiquito, who can't seem to hold on to them for very long.

My rationale is that the other mice are sitting around outside waiting for Ferdinand to come back from his scouting expedition with reports of bounty.  If I toss him way out, he won't make it back to the hordes, so they'll assume the worst and move on to some other house.

If Ferdinand should happen to make it back to his tribe, he'll have such a wild tale of frightful happenings that the group will vote to move onto the neighbor's.

It's more humane than traps and definitely cleaner than getting mouse guts everywhere.

Oh such a handsome guy. Charlie isn't one to give much personal space either. No mice as he is an indoor cat only, and the one time one got in the house (many years ago) he didn't know what to do with it. We had to catch it. Hope you have a good weekend.
Hugs
Linda

Neither of our cats hunt for anything besides Temptation treats. Chiquito looks like one of those antique Japanese drawings of cats.

I love your kitty post, your cat looks like my two. I would freak the freak out if the cats brought a mouse into my bedroom. I did see a mouse in the garage and I shoved both cats out into the garage for about an hour to go on a mouse hunt. Not sure if they were successful, they didnt drag anything in and I'm a little scared to go back and check the garage LOL