It was so nice this past weekend that I can almost envision fall being on the way.  Woo hoo!

I was able to get out in the backyard and take care of several projects that I had been totally putting off due to the heat.  Our junk pile for the set out at the end of the month is off to a nice start.  The back porch is cleaned off and organized and I made a nice dent in the shed.

After all that, I think I deserve a little Big Flea action today.  Don't you?

With the milder weather, I've started taking walks again.  My doctor is really pushing for motre exercise on my part.  Apparently, pushing a shopping cart down the aisle of the Peddlers Mall doesn't count.

Other folks are starting their early junk piles, so some finds are popping up here and there.  I'll take my incentive wherever I can get it.

I did discover that Gargoyles are moving into the neighborhood. 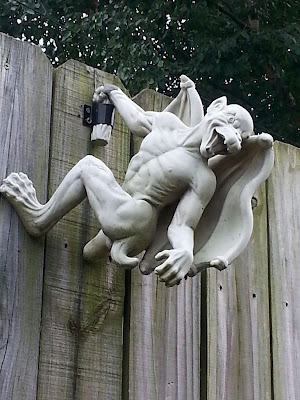 I'm going to start researching to find out what kind of food I need to leave out to attract one to our back fence. We could use the extra security.  Someone pushed in our back gate last week and ransacked two of our sheds.  Thankfully, they did not get into the biggest one, but they did take our chainsaw and spare window AC unit.

I want the kind of security that will eat the soul of the next bastard that tries to do that.  You know, like a Gargoyle.

LOOK WHAT I FOUND

No less than five new construction dumpsters have moved into the neighborhood recently.  I'm checking them daily and it's paying off. 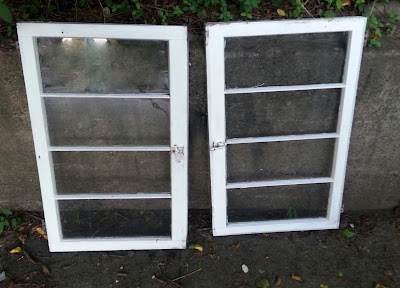 I love the handles on these windows.

Sadly, one dumpster is in front of the house of the neighbor we haven't seen in a while.  They are rehabbing his house so hard that they're almost rebuilding it.  I'm fearing the worst now, which makes me sad.

Our across the street neighbor would know for sure what happened to him, but we haven't had time lately for a good chat.  He's the kind of neighbor you have to lay aside a solid hour for conversation, even if you only have a simple question.

The last week of August was one of the most consistently strong weeks I've had in ages.  I ended the month pleasantly surprised and very happy.  I am looking forward to fall sales.  I have a van load of hay bales and pumpkins ready to festoon the place with autumnery!

I am also finally going to begin my big redo project.  I ended up scrapping my plans last week to stay at home and do much needed work in the house.  I have a hard time balancing house needs vs booth needs some times, and usuallu my time gets slanted in favor of the booth.  It was good to have some productive time at home for a change.

I'll be doing before and after pics here, so watch for that.  This is going to be a near total top-to-bottom, side-to-side, wall-to-wall, floor-to-ceiling, back-to-front, and any other way-to-any other way that I might have forgotten reworking of my spaces.

Plus, a complete restocking.  I've been just letting things go without bringing in a whole lot of new in order to make room for the fall, Halloween and Christmas stuff that's on the way.  I've got lots of holes to fill!

The other day I was going through some paper goods for the booth and came across a stack of booklets full of trading stamps.  You know, like you used to get at the grocery store. 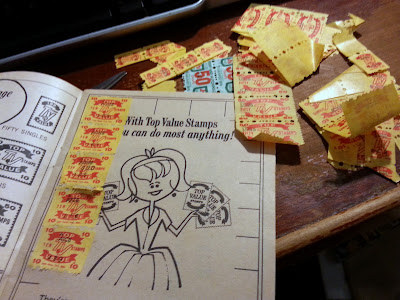 I realized that one of the booklets was empty and that I also had an envelope full of loose stamps.  The next thing you know, I was licking and sticking and pasting until I filled that sucker up!

It brought back a lot of memories.  I used to help my grandmother do that when I was a kid.  She would put the large denomination stamps in and leave the singles for me to do.  My grandmother was serious about her trading stamps too.  A couple of pieces of furniture in her living room came from the trading stamp store.  When my parents got married, she got them a pair of lamps with her stamps.  (She also liked her poetry.)

Of course, we never did the stamp books while watching low budget 1980's Italian apocalyptic sci-fi movies like I did that afternoon.  Grammie preferred that her cinematic visions of dystopia come from Poland.  She was a bit of a cinema snob.

I will say that the glue on those things was nasty.  I was worried that I might end up repeating the envelope scene from Seinfeld.  It's probably not a good idea to go around licking 40 year old glue.  I think I'll make a note of that, just in case.

You enjoy some music for Monday.  I'm going to  get ready and scoot to the Big Flea.  Wish me luck!  I picked this song out so you'd be thinking especially about me.

Oh I saved those stamps and got some things using them! Ugh to old glue though. Nice to hear someone is getting something done around their house. Mine is a mess. Everything is on hold. Love the windows. I can't believe that Fall will be here soon. Take care. Hugs!!

Our dog Kate was one who would lick absolutely anything...and she would not touch stamps. I stopped licking them myself when I realized that and used a sponge.

I've put Warriors of the Wasteland on our Netflix list. You should keep an eye out for my fave, Star Pilot. Wait for the scene in the cave where the follow-spotlight wanders away on its own!

August was a good booth month for me too. I love having some cooler weather, always a great incentive to get outside and do some cleaning up.
Joy

Sorry to hear you got vandalized and robbed. Robbers with a chainsaw is particularly upsetting. Be careful out there! Every one here said it was cooler and fall like so we went to a big outdoor craft r=fair and a million yard sales. Guess what? IT WAS HOT and I got sweaty. I am SO OVER being sweaty. Junk Ranch is in 24 days. Please let it cool down a smidge! Gook lick at the Big Flea. (yes, I saw that typo, but I left it since you talked about those stamps. )