This has been a rough year for blogging for me, apparently.

I did have a good birthday.  Thanks very much for your well-wishes.  I went to three vendor malls I don't normally get to, plus a church sale that turned out to be really great.  This guy at the church sale had a tub of Batman comics, but the sign with the price was turned over.  I went to flip it back, expecting it to say they were a dollar each or something.

Instead, they were 25 cents each.  I heard Keith say:  "I know that look."  And the next thing you know, they guy and I have negotiated a price of 20 bucks for all of them.  I counted them later and it worked out that I paid about a dime each for them.  Score! 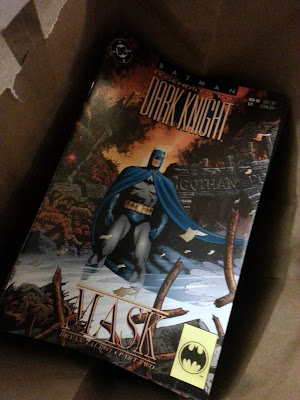 Here they are all waiting for to have a chance to pop in a cheesy movie and bag and price them.

Some other guy at the sale offered to run home and get his "brand new" Batmen comics for me.  He had been asking five apiece for them, but would take a buck each from me.  I told him I was too cheap for that and walked away.  Seriously, you just saw me pay less than 25 cents each and you think that's a strategy that will work with me?

It ended up being a good comic weekend.  Two of the malls I went to had some great comics for good prices available as well. 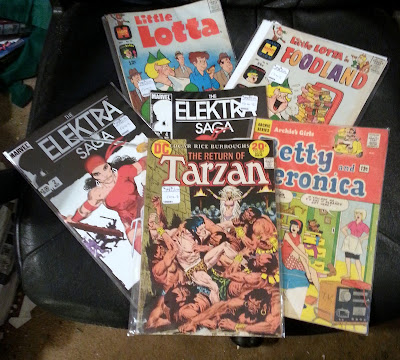 Just a small representative sample.  Lots of Silver Age Harveys and Archies in this batch.  I have a couple of buyers that look for these, along with Dell, Gold Key and Disney stuff.  It's honestly a niche that the other guys with comics in our mall don't bother with, not even they one other guy who actually knows comics.

Since the previous weekend, I had struck out on comics at the big flea and at a comic shop sale, I was kind of glad to find so many.  I told Keith that the comics I expected to find the last weekend were actually hiding in the next weekend!

I did find some fun DVD's at the big flea, even if there were no good comics. 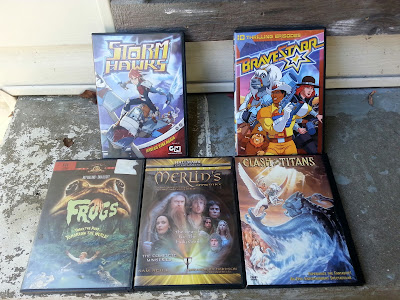 And then the world ended.

I've spoken and will continue to speak my piece on the election over on the Book of Faces, so I won't repeat it all here.  I will say that I am sad over the election results and scared as hell for so many reasons.  The racist attacks we've seen so far are only the tip of the iceberg.

I am still trying to wrap my head around it all. I may end up yet having to do some posts here as well.

I will share this though.  I stayed up until 2:30 on election night,  Keith went to bed, but I had to know.  I stayed up until the electoral votes hit 270 and it was called for Trump.  At that moment, the tears I had been just barely holding back let loose.  Chiquito was asleep in my lap, and he sat up and looked at me and started rubbing against me.

I got up and laid down next to Keith.  I woke him up and told him what had happened.  We held each other and I cried some more.  Chiquito came and laid on top of us and it was just us, alone in the dark. Together against what had just become world.

The next day, I cried myself out.  I posted about my sorrow on the Book of Faces, which has caused people I thought were my friends to mock me.

We have got to be better than this.

I am finally almost done with the booth re-do.  Keith went and helped me for several hours on my birthday.  (Best present ever!) And now things are looking good again.  I still have a bit to do, plus I sold a shelf last night, so I've got some extra work to do today.  I'll have pics tomorrow.

Sales are slowly picking up again.  Election day was the first hundred dollar day I'd had in over a month.  Since then, things have been a lot stronger, with several big pieces selling. Looks likes Melissa was right.

This past weekend, I house sat for my sweet friend Laci. 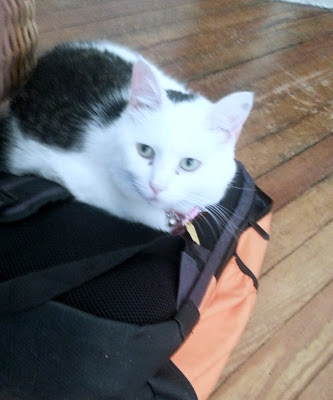 She likes my orange backpack and sleeps on it every time I'm over at her house.

I had a mishap at Goodwill last night, when I picked the wrong size cart.

But that wasn't as bad as missing out on three boxes of Shiny Brites when some kid cut in front of me and grabbed them.  ACK!

I have sooooooo much to do this week!  Treatment tomorrow.  Finish the booth.  Get the Christmas out.  Laundry. Pack.  Plus, there's a John Prine show on Friday that we have tickets too.

Thanksgiving is a week from Thursday.  Ack!  How does it sneak up like that every year?  We leave for Arkansas this Saturday.  (Shara email me!)

The sorrow that began with the election results last week continued with the death of musical genius Leonard Cohen.  (My beloved Emmylou Harris had stated that he was the one artist she always wanted to work with.  Now she'll never get the chance.)

In light of everything that happened last week, there's only one choice for Music for Monday.

It sucked. Trust me, I know. Harassment at some of the local high schools, for starters. I wrote about it yesterday...

Wish I had some magic words.

Hugs Ed, I am Canadian and I cried too and stayed up until the numbers hit 270. I have had to stop following people who think things will be great now. Sad.

Happy belated Birthday. Glad you got a great comic score and that sales are finally picking up.
Joy

I've been so glad to share my grief with you on the book of faces. I'm slowly getting better? less numb maybe. I've shed tears and been so scared for all of us. Glad you got some comics and had a good birthday. This has been a rough year but I'm hoping to end it like I started it....I Choose Joy!
hugs!

BIG HUGS! I'm with you on being sad. I cried quite a bit myself. As sad as I am to be wrong about the election, I am happy to be right about booth sales. I have my very expensive masters degree to thank for that answer. :)

I've changed my mind about a lot of my opinions over the last couple of years. I was very judgemental even though I didn't realize it. I'm still working on that. But I do want to say that I am very upset at the election and also very surprised because I really did not think he would win and I did not want him to. Please take care of yourself. We all need to take care of each other.

I still can't focus. I am still confused. As a teacher, I just can't envision this world for my students and niece/nephews. I am from Virginia and know what a wonderful person Tim Kaine is, a true Christian. Sadly, some of my family members and I have parted ways. They don't want to understand my point of view; mocking and jeering is a good way to put it. We have stand together. Hugs.

Sending hugs.... It's such a nightmare.