The Best Thing I've Ever Found

Junk set out is a lot like trick-or-treating.  You tend to remember which houses are the good ones.  Of course, they don't always deliver a fabulous trove of goodies, but the odds are more in your favor when the house has a good junk reputation.

After a while, you also get the feel for which houses consistently set stuff out early, which is helpful in planning your routes.  A good house that sets stuff out early is like extra icing on your cupcake.  Or something.

Which brings us to the house about five blocks from us that always has a huge pile of stuff that shows up two or three days early.  This year it was a total dud.  It was nothing but pieces of old paneling, ugly cabinets, and hunks of drywall--the downside of renovation junk.  Not a window or a door or anything even remotely interesting.  And no boxes of small stuff like past set outs either.

No this is not a story about this house, except to say that it broke my heart in 17 places this time around.  (Does anyone get that reference?)  This is a story about the house next door.

Someone at that house got clever and pulled a trick that I also like to use--putting all the metal stuff in a separate pile from everything else, so that the scrapper won't make a mess when they come through. It does work.  (So does sitting in the backyard and screaming "Clean up your mess!" at the scrappers.  I scared one to death one year doing that.  He hadn't seen me sitting there watching him make an ugly mess of my neatly stacked pile of stuff.  He cleaned it up.)

The non-metal stuff was all broken furniture and crap, but the metal pile was pretty cool.  Out of that one, I nabbed:

AND THE BEST THING I'VE EVER FOUND: 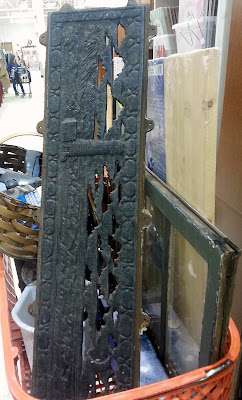 It's a cast iron decorative seascape with cut outs in the form of clouds.  I cannot find anything else like it online, but I'm pretty sure it's a heating vent. 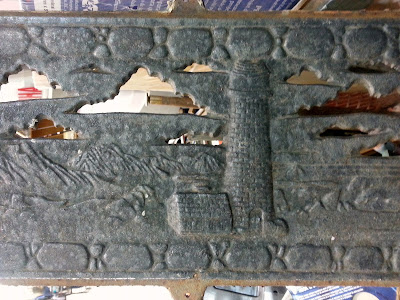 This is a closer look at the part with the lighthouse.  It's pretty detailed.  Many of the clouds kind of resemble the outline of Kentucky, which was what actually caught my eye first.  The vent was on the bottom of the pile and all I could see was the cut outs. I thought it was some kind of mold for Kentucky-shaped biscuits or cookies.  I was kind of shocked when I got it uncovered and saw what it was.  I've never seen anything like it, but I am kind of sheltered.

As far as I'm concerned, this one set the bar pretty high for future junk finds.  I can't wait to see where things go from here.

That is a REALLY cool find!

All great stuff but the vent cover...or whatever it is, amazing. A real work of art, a keeper I hope!?!? Hugs!

It;'s gorgeous! Is it a lighthouse or a silo? I can't make out the top of the building, but it resembles a silo to me.

Keep, keep, keep! Or sell, sell, sell at a high price. Cast iron vents like this are hard to find at a decent price much less FREE!