So let's start unloading that Mazda load of free stuff from Monday.  Like I said, I had to leave the ladders on the Mount of Sorrows for the moment.  I am working on making a spot for them at the booth this week, so I can haul them over soon.  There were also two containers of smalls left in storage, because I am up to my armpits in smalls everywhere right now.

I'm going to go ahead and reuse Monday's ladder pic anyway, so I can draw attention to the black wooden screen frame that was also part of the haul. You can see it peeking out from behind the ladders.  Shy little thing.


Like I mentioned on Monday, a lot of the van was filled with boxes of books, plus a box of records.

There was also this vintage Underwood electric typewriter, which is quite heavy. And an old adding machine, which is even heavier.  Typewriters don't stay with me very long, so grabbing it was a no brainer.  I used to never, ever find old typewriters, but these last couple of years, I'm practically tripping over them. 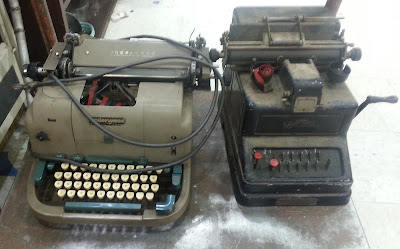 The adding machine is missing all the buttons except for these two, but I couldn't leave it behind.  It's got such a sweet old look to it. 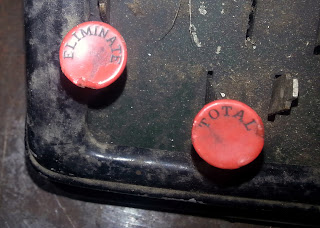 The books were mostly unremarkable--good stuff, but not worth taking up blog space.  I was kind of needing some too.  I've been selling a lot of them lately.  There was one worth mentioning here, this collection of recipes from the local paper, which was published in 1970. 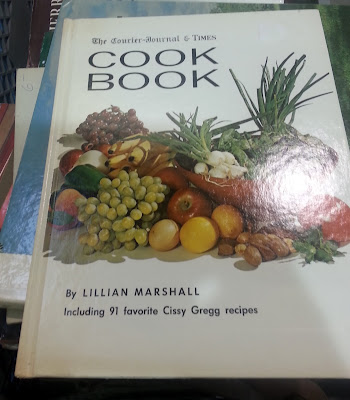 Cissy Gregg is a well known name around here.  She wrote recipes for the Food section of the paper for years and years.  In the 50's and 60's, the paper put out special supplement sections that collected her recipes. I'm always on the lookout for them.  I love having local interest items for sale.

The records were mostly show tunes, but there was one special album that I am saving for its own post.  It'll be a "Retro Y'all" some time in March.

All mostly stuff I would've picked up too!

That old adding machine is wonderful. Just love old things like that. Good freebies my friend.

Eliminate and Total may be the only buttons you need.