I know that I haven't been blogging for the last few months, but I've been intending to blog.  That's something, isn't it?  I've got a folder full of photos to prove it.  That's right.  I found the time over and over again to take pics of stuff for the blog, but not to actually put them in the blog.  It's hard to be me sometimes, let me tell you.  Sigh.

For the next few posts. I'm going to dump as many of those pics out as I can to at least give a snapshot of the junking for the last half of last year.  That should give me a handful of quick posts and enough time to at least get the rest of the month planned out.  Plus, I know everyone likes finds posts.  Right?

Let me start with the first finds of 2018 (or at least a teaser), courtesy of the New Year's Big Flea.  This was what Gran, my granny cart, looked like at the end. 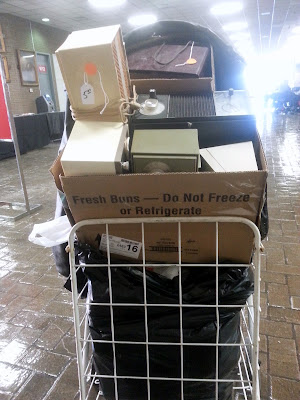 Care to guess what's inside?  I'll give you a hint: 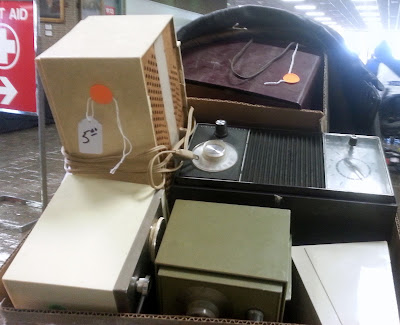 It's the start of a vintage clock radio collection!  I bought a couple from the guy, and he made me an offer I could not pass up on the rest.  There are nine all together.  That's the benefit of shopping on the last day of the Big Flea.  Tomorrow, I'm pulling my Christmas out of the booths.  I have a good idea about what to replace it all with.

If I remember/have time, I'll get some pics of everything else in the cart.  We'll see.  By the way, did you catch the helpful advice printed on one of those boxes?

Words to live by. 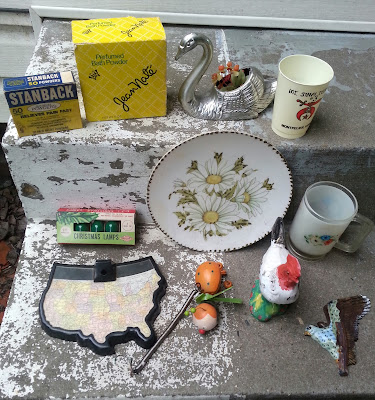 I found all this stuff in an alley during junk set out.  It looked to me like someone had cleaned out a relative's house and bagged it all up for the junk pick up. Someone had ripped open all the bags and scattered stuff everywhere.  (DON'T EVER DO THIS!)  I ran home and got a bunch of bags and filled them all up with stuff.  This is a pretty representative sample.  Bith the Jean Nate powder and the Stanback stuff had never been opened or used.  The Jean Nate made me think of this girl named Gina who sat across from me in my Trigonometry class during my junior year of high school.  She was always carrying on about Jean Nate stuff and how good it made her smell.  She would actually say things like: "Gee, I smell good today."  Isn't it odd the memories this stuff brings back?

Most of the stuff from this find was paper goods and ephemera.  There will be pics of some of it later.

When you find a cheap Thor helmet, you just gotta buy it.  Then take a selfie while wearing it. 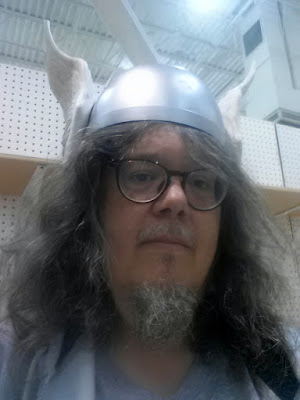 The long, shaggy, slightly disheveled  look I'm rocking these days kind of fits with the viking motif, doesn't it?  For Odin and Asgard! 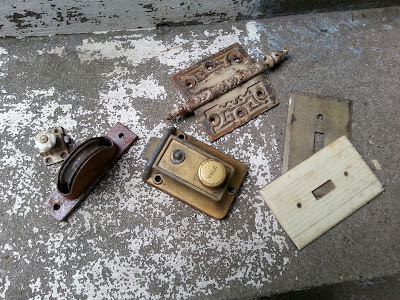 There's an old Democratic Club down the street from us that was gutted and renovated over the course of last year.  The dumpsters yielded wonderful salvage treasures like these.  I love the detail work on the hinges.  I found a dozen or so of them, and they've been popular items at the booth.

Sadly, I also found some awesome wooden drawers and two wonderful tables at this site.  They went straight to the booth, but I did set them all up for a nicely staged photo, only to have my phone battery give out before I could take it.  They all sold on the same day to the same person, so I never got a picture, but they were awesome.  Two of the drawers were the old cash drawers from the bar.

In case you didn't know, a Democratic Club is a lot like a VFW or American Legion post, basically an open bar.  I had the pleasure of speaking at one in the 90's, when we were trying to get LGBT anti-discrimination laws passed here in town.  I learned that you don't ever go to a group to talk about anything, when they've invited you to come after the bar has been open for two hours, even if they do say they're Democrats.  I actually met the then-Democrat state Senator for that district (which included my neighborhood) who told me I could shove the information I had brought "up my ass."  A year or so later, he switched to the Republican Party.  Again, odd memories, huh? 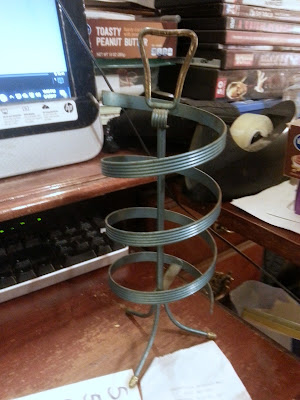 Does anyone know what this is?  I thought it was some kind of jewelry holder, until I realized that there was nothing to keep it from sliding off.  I bought it because I thought it looked cool. 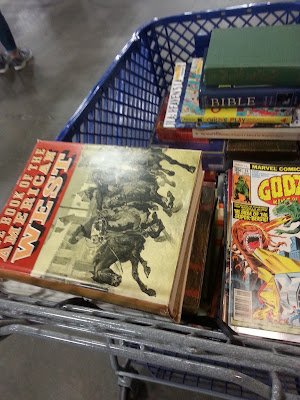 Half-Price Books does this traveling clearance event in several cities every year.  For the last three years, Louisville has been one of the sites.  They reserve a big room at the fairgrounds and fill it with stuff.  Nothing is over 2 bucks, and a bunch of stuff is less.  This was my cart at the last one. 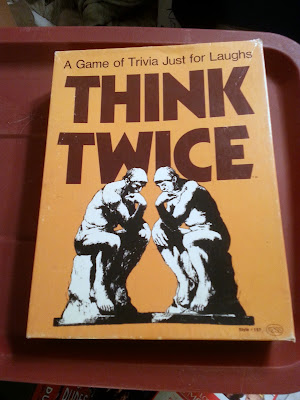 Not everything at that sale is new or recent.  There plenty of vintage items, like this trivia game from the 70's.  The book below might be my favorite find from that sale.  I love kids books. I got it for the title--I'd never seen the word "Brimful" used before--and the Tasha Tudor art. 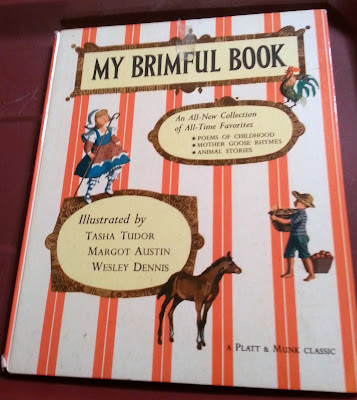 You gotta grab your finds where and when you find them.  All this stuff was a curb find when I was on the way to the bus stop one day.  I crammed it all in my booth bag and still managed to catch the bus on time!  The baskets were an appreciated find.  I use a lot of them for displays. 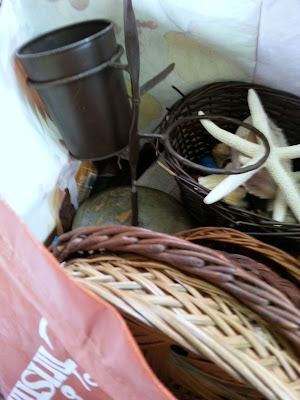 People seem to like these big family-style Bibles, so I  pick them up whenever I can find them cheap. 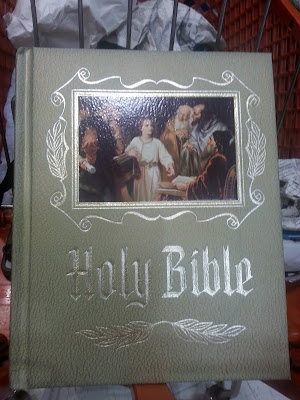 This is an odd, little display I made in my salvage booth.  Nearly everything in it was a curb find. 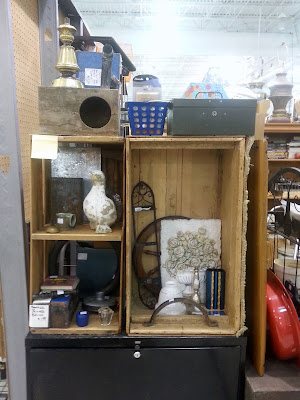 Wow, Eddie, you are so good at what you do. I really enjoyed this post. Love that last photo. I'll bet you have the best booth in that place. Wish I could poke through it.

Really enjoyed the post and seeing your finds. You should’ve kept the Jean Nate. You could be the best smelling Viking in Kentucky. Just sayin....

You gotta keep that helmet, man, it is YOU.

I'm wondering if maybe the mystery stand was for clip earrings??

You're back!!!!! Happy to see some of your finds. I have missed your posts. It is quite amazing what you can find set out for the trash. Speaking of BIG FLEAS... ours is the weekend before MLK day. I've already bought my discount ticket ($2 off) and I'm prepared to do some shopping. I haven't bought anything since Thanksgiving weekend and it's long overdue! Looking forward to more of your finds posts... don't stay away from us too long now!

I have missed you! Love to see what you find, buy and keep (that helmet?). Love the Brimful book!! Jean Nate on my, that does bring back memories of high school. Looking forward to your next posts! Hugs!!

You in the helmet - priceless Ed. So dancing happy that you are blogging and sharing.
Hugs.
Joy

Glad you're back. Keep coming back, MMMMkay? (Says the lady that rarely blogs anymore....) I'm glad you're still busy hunting and gathering. Thinking about giving up my booth - still on the fence. Missed you!