Continuing from yesterday, here are some more of the finds from last year that got photographed, but never blogged.  Unless noted otherwise, everything here is a trash find. 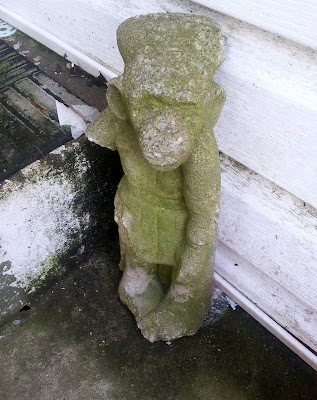 I always grab discarded lawn ornaments, regardless of the shape they're in.  This one wouldn't even stand up on its own any more.  I thought it could be painted and make a cool door stop or something.  It actually sat on our stoop for a while, until Keith told me it was creeping him out. 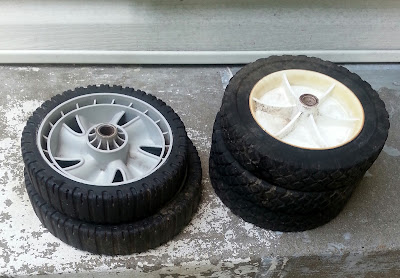 One of our across the street neighbors is also a garbage picker.  He used to do a yard sale every so often.  Now he just sets his old finds out during set out.  I've gotten some good stuff from his curb over the years.  These wheels came from there.  I grab stuff like this and toss it in my salvage booth as spare parts.  Someone must need them, because they do sell.  I'd rather see it go to a new person than be tossed out. 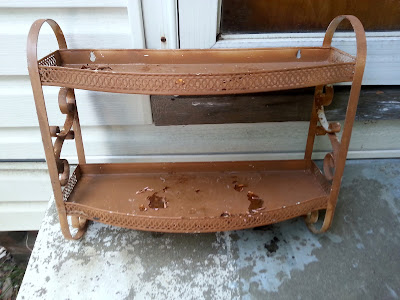 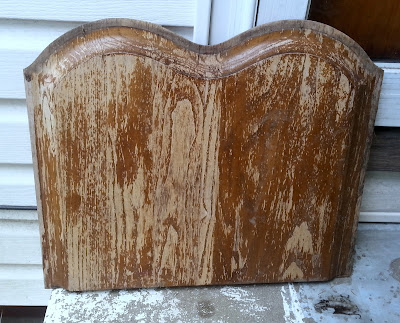 My price tag on this one says:  "Make your own 10 Commandments!"  That was my thought when I first saw it.  I also added another tag that says:  "Thou shalt shop Booth 62!" That's an order! 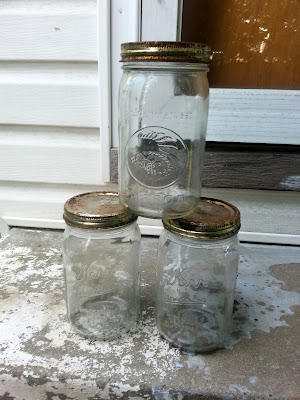 I found a huge bucket of these canning jars.  They're not at all old, but the rusted lids lend them that feeling.  They are waiting in the shed to be filled with odds and ends.  I sell lots of stuff in jars--spools, buttons, clothes pins, beads, etc.  My best seller is actually just jars of miscellaneous junk, which is what I use these larger jars for.  I keep one by my desk and just toss random stuff in it until it's full.  Usually, it's the leftovers from a bag or box of junk I bought that are too small or uninteresting to sell by themselves. 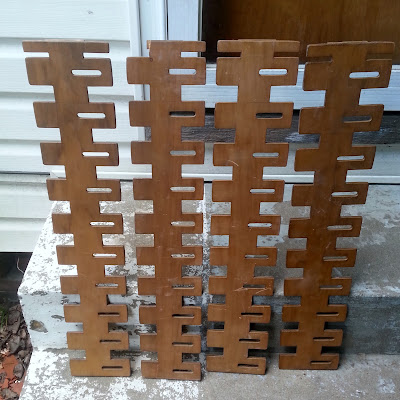 MCM wall hangings, which I thought were cool.  It's amazing what people will toss out.  Even the broken one sold. 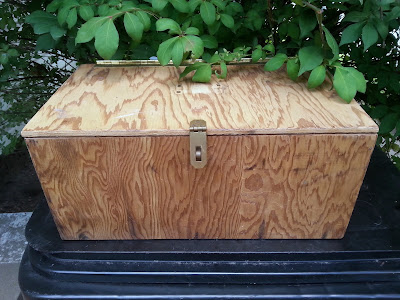 Big Flea find.  I am kind of obsessed with wooden boxes, particularly homemade ones like this one.  They're a top seller for me, so I jump on everyone I can find. 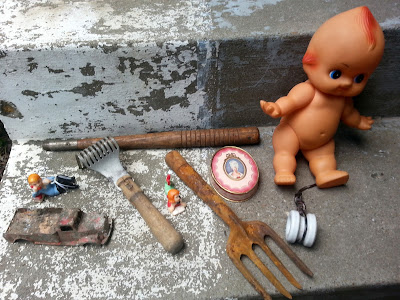 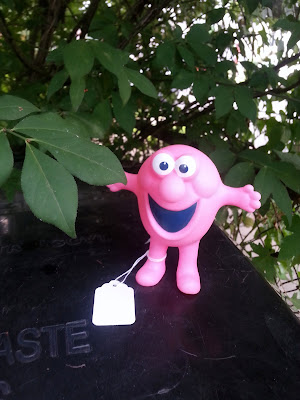 Remember the awesome cast iron vent I found a while back?  I went back to that house for the last set out, and all I found was Mr. Bubble.  That's kind of a metaphor for this whole business, I think.

Speaking of that vent, I sold it to a downtown antique dealer Who was a new customer to my booth.  I was working my spaces that day, and we talked for a long time.  I saw him again right before Christmas, and he told me that he had taken it to a big antique fair in New York and someone bought it from him right as he was setting it out.  I made a real nice deal off of it, and so did he.  I also got a regular customer out of it. 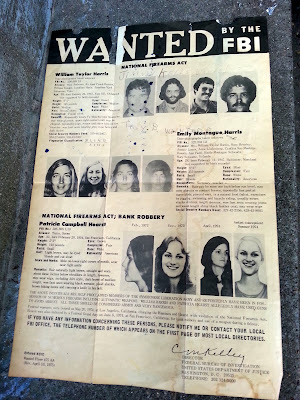 I found two bags of old paper in an alley, and brought them home to sort out.  Oddly enough, a lot of it was papers and  stuff from a tiny town in far western Kentucky where my great-grandfather lived when he was a boy.  There was also this poster.  Take a closer look at the bottom. 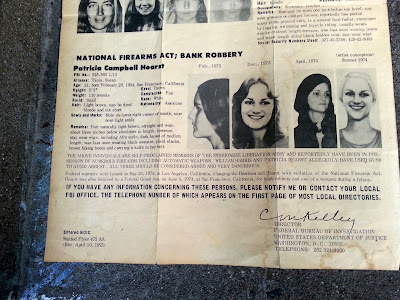 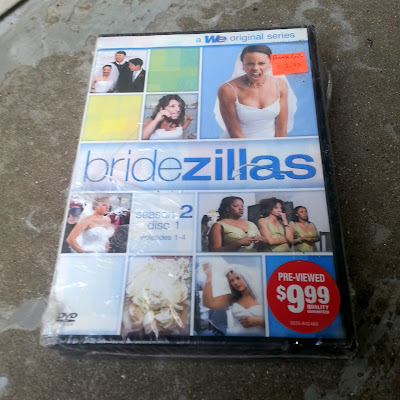 Big Flea find.  Also, guilty pleasure TV.  I don't actually watch the show itself.  I view clips of the big meltdowns on YouTube.  I look at it kind of like I do all those Real Housewives shows.  I can watch a little bit of it, turn it off and say to myself:  "Maybe I'm not rich, but I'm also sure as hell not CRAZY!!!" 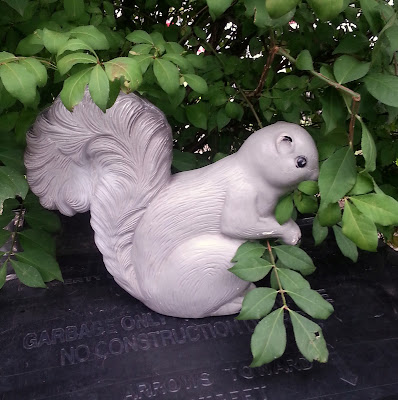 Hiding in my front bush is a shy little squirrel blow mold I found in the alley that was  strewn with stuff.  He's by Don Featherstone, the guy who designed the pink lawn flamingo. 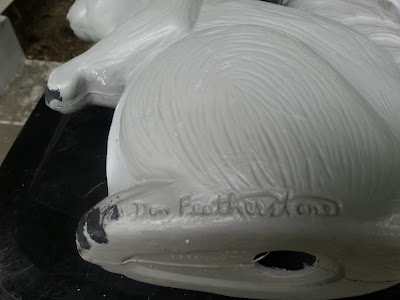 Finally, a happy find.  I got this at the Peddlers Mall.  The vendor had a bag of them and had misidentified them as Happy Meal toys.  It's actually a vintage Wilton cake decoration.  I htink it dates back to the days of the TV show. 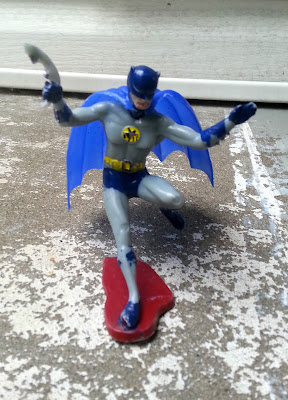 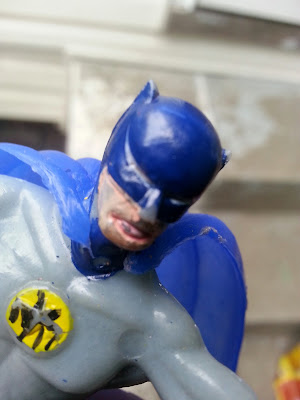 It's seriously amazing what you find in the trash. If I dug through the trash all I'd probably get is tetanus and a bad infection.

I just love to see what you find. The squirrel is cute and you know how I love my Flamingos so this would be a keeper for me. Keep sharing, I'm having a blast seeing what kept you busy last year! Hugs!

So much fun. You see possibility in everything. That's awesome!