I keep trying(and failing) to get an actual Monday Ramble out, but it doesn't seem to be working very well.  Let's go with this one for this week, at least.

First up a question: 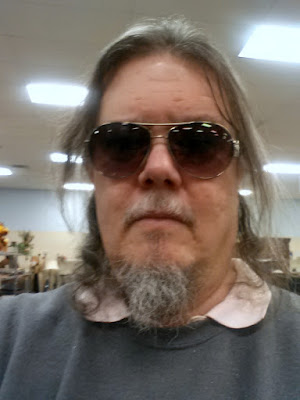 Do these sunglasses make me look all, you know, celebrity and stuff?  (Probably not.  The scraggly-ass goatee is looking particularly scraggly-ass here.  Brad Pitt can pull that shit off.  Me?  not so much.)

Cold, windy and wet this week, but no freezing temps and no snow.  We've had too many days of that over the past couple of weeks.  I declared a little while ago that I wasn't leaving the house until the temp was above 20, then promptly spent several days drinking hot chocolate, eating pie, and watching cartoons.  I am so over this winter.

I have definitely come to understand why some large mammals hibernate during the cold months.  I'm wondering how I can sign up for that program myself, since I am also a large mammal.  I just need to find an electric blanket that will stay on for three months and teach the cat to feed himself and scoop the litter box.

I'm working on a major booth redo, but it's going painfully slow.  I'll have pics when I get done, if I get done.  It's been a good January, sales-wise.  I haven't really had a post-holiday dip, which usually happens after New Year's.  I've been on a bit of a roll since the week before Christmas, even with the store closing for a couple of days due to weather.  Small furniture and higher-priced items are really moving right now.

2017 was kind of average as far as booth sales went.  I set a huge record in March, then crashed hard in April.  Summer was better than usual.  Fall would have been, except that I took an extra booth during a rent special to try and move some furniture, then barely broke even.  I ditched it when the special was over.  November and December were super-good.

Tine for another pic. 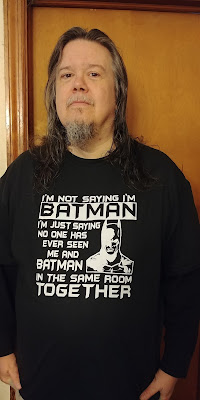 Tucker is starting his daily rampage through the house.  It's crazed kitty time!  (Or, as I like to call it: "Go, Speed Racer, Go!")  Life with kittens, I tell you.

I made a super-major comic score at an estate sale last week.  Nearly 100 issues of one of my primary comic obsessions.  I plan on sharing it soon.  I actually want to do an in-depth sort of look at the four kinds of comics that make me go "Squee!" when I find them.  One them you can already guess, vintage romance comics.  I'll go ahead and surprise you all by saying that none of the other three are Batman or Wonder Woman.

And with that, I'll leave you with some Midweek Music.

You're lucky January has been good to you. It has not been good to me. We had to close the shop down the whole first week of January, due to frigid temps and lots of snow and ice. I think I'm going to barely recover to make a little money after the rent is paid. I decided to get back into online selling to help supplement. In that avenue, sales have been spectacular, without much effort!

Hi Eddie. Looking forward to seeing your booth pictures. We are 'supposed' to be getting snow tomorrow and the next day. Tired of being cold and driving in sheeting rain. So far no ice. Hugs.
Joy

I'm just glad you're blogging at all

You look all Hollywood in the first pic and very suave in the second pic. It's good to have you back my friend. I'm glad sales were good to you last year. I seem to be at a standstill on most everything right now until I'm healed up from this surgery. So trying to embrace the couch potato and watch tv and read and of course eat! Hugs!

Glad to see you're back to blogging. I've missed you.