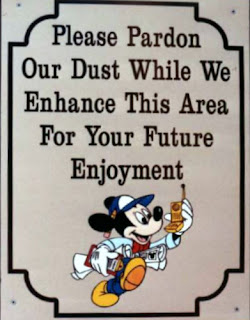 So, one day last month, I'm pulling up to the back of the mall to unload to do my weekly restock and re-foof at the booth.  Regular visit are necessary to keep the space looking fresh and clean.  Even after a slow week, there's still a lot of trash to clean out.  Sometimes, the restock is less extensive than others, but the weekly stop is a must.  Just moving things around can give the space a new look.

Anyway, the manager is stepping out for a smoke and she tells me that the guy who has the booth in between my spaces is moving to a new spot in the mall, and he suggested that they check with me about the space.  Now, I've been kidding this guy for months that I was going to squeeze him out and found an empire at our end of the mall.  I'd call it "Ed Mart."

Since there are usually a lot of open spaces at the beginning of the year, the mall has been running a special where you can get a second slot for half price.  I wasn't sure I'd be able to get it, because I did one of those deals last year, but I decided to go for it.

So, since the first of the month, I've now been the vendor for three contiguous spaces in one end of the mall, plus a wall space across the aisle.  Getting it all ready and keeping up with it has taken a lot of time, so the blog has suffered while I've tried to adjust, but it's coming into control now.  I think.

What's really nice is that I now have what amounts to a double space at the end of an aisle.  I control both corners.  I'm still figuring out the time it takes to keep this one up and working out how much to bring in each week is more challenging now.  I'm having to break a year's worth of habits, which really is a good thing.  You don't want to be too comfortable.

Sales have jumped, but it remains to be seen if they've boosted enough to cover the new rent, plus give me the take home I want.  Still, I do think that this is the only way to keep growing the booth.  It's enabling me to carry some larger items, which attract new buyers.

Email ThisBlogThis!Share to TwitterShare to FacebookShare to Pinterest
Labels: expansion, the booth